It’s Tom Brady’s 40th birthday, and the New England Patriots quarterback has without a doubt earned himself a heaping bowl of avocado ice cream. Brady has been one of the greatest quarterbacks ever and is playing at an age when few football players are still putting on pads, let alone producing at an elite level.

Brady is coming off his second-best statistical season ever1 and arguably his greatest on-field achievement. Brady finished the 2016 regular season among the top three in nearly every major quarterback rate stat: touchdown rate, interception rate, yards per attempt, passer rating, ESPN’s Total Quarterback Rating and adjusted net yards per attempt. He finished the playoffs with the biggest comeback in Super Bowl history.

It may appear that Brady is football’s Benjamin Button — a QB magically getting younger as he gets older. But it’s Brady’s commitment to hard work that’s the most likely source of his longevity. The offseason has been filled with stories about Brady’s anti-aging regimen, with everyone from Sports Illustrated’s Greg Bishop to All-Pro teammate Rob Gronkowski trying Brady’s self-care regimen. Brady even has a forthcoming book on how to replicate his age-defying performance.

But despite Brady’s unwavering intent to demolish both the AFC East and time, it’s reasonable to ask how much longer he can keep this up.

Brady’s 2016 season didn’t just stand out from the rest of the NFL — it towered over his own recent campaigns. Compared with his other recent seasons, 2016 almost looks like an aberration: 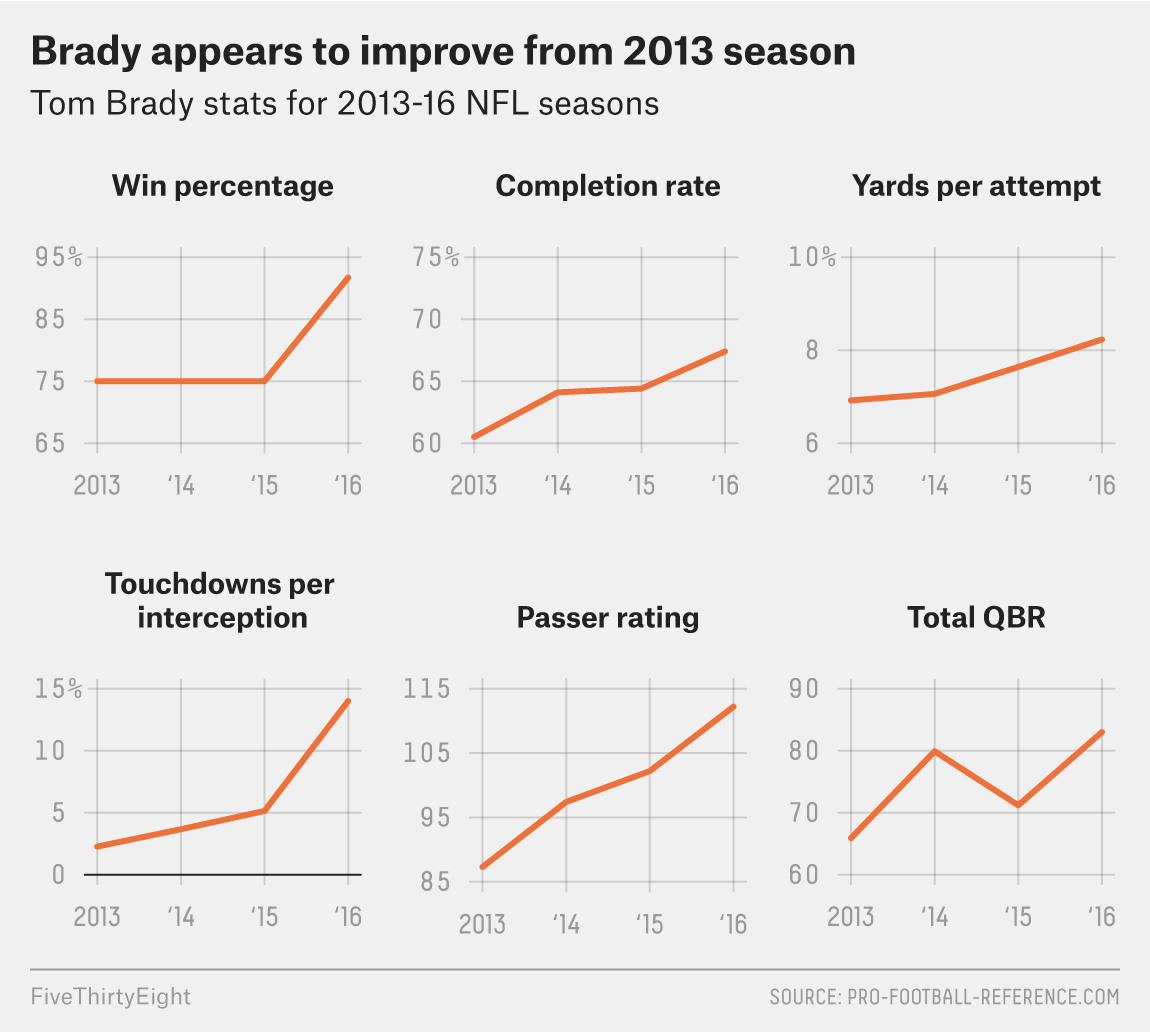 Before the start of the 2015 season, Brady seemed to be on the decline; his rate stats in 2013 and 2014 were the worst since he first achieved All-Pro status in 2007. “Worst” is relative: Over this stretch, he was good enough to earn four Pro Bowl nods, four division titles and a Super Bowl win.

Brady’s numbers improved in 2015 and then skyrocketed in 2016 — but his overall 2015 numbers don’t tell the complete story. In that season, his production started off significantly better than the previous two seasons, but he wasn’t able to sustain it: 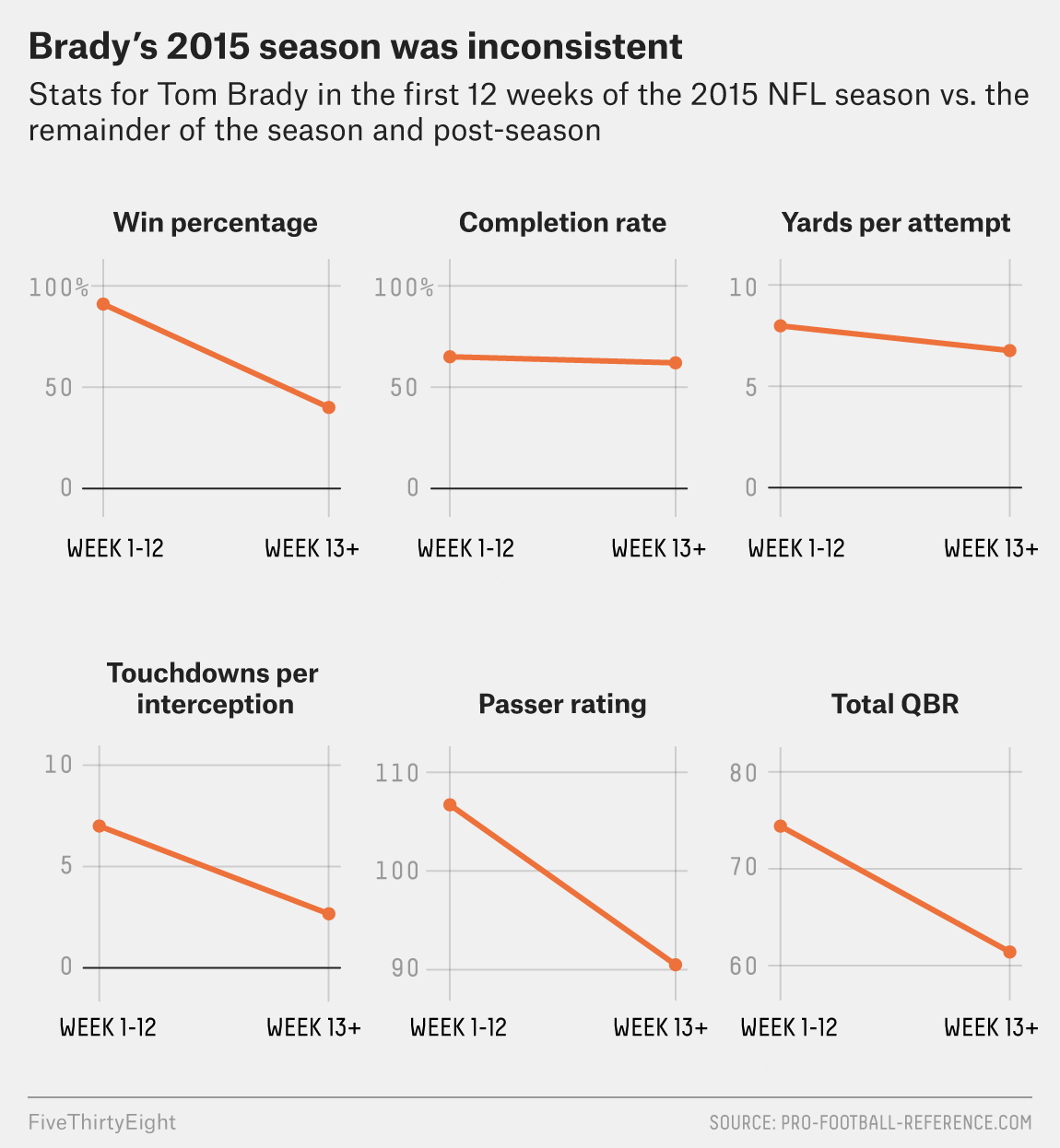 The drop-off in his level of play over the last month of 2015 was unmistakable, and it carried into the playoffs. His two-interception, four-sack, 56.4-rated passing performance in the AFC championship game was one of the worst playoff outings of his career.2

Unlike in 2015, Brady may have looked sharp late in the 2016 postseason because he had fewer games on the odometer — and not by his choosing. His Deflategate-related suspension for the first four games of the 2016 season not only served as a rallying cry for the entire Patriots organization, but also spared his body and arm from a month of bumps, bruises and repetitions.

This season, Brady will have no such early-season sabbatical. He’ll be facing players who were born while he was in college at the University of Michigan. Thriving at his age in the NFL is certainly rare — but it’s not unprecedented. Warren Moon, Brett Favre and Peyton Manning all had a dominant season at or near age 40. But all three experienced a sudden decline in performance, as if a switch had been flipped on their ability:

New England seems intent on helping Brady replicate his 2016 season. This offseason, the team traded for speedy wideout Brandin Cooks to bolster the Brady arsenal. Patriots owner Robert Kraft compared the impact of this spring’s trade for Cooks to the team’s acquistion of Randy Moss in 2007. That deal sparked the greatest statistical season of Brady’s career. Some experts are projecting the Patriots to go undefeated, as they did after Moss arrived.

There are a lot of reasons to believe Brady will stay excellent, from his self-care regimen to the talent around him to perhaps the best head coach in NFL history. But Favre and Manning were both playing their best football immediately before playing their worst.

Brady picking up at age 40 where he left off at age 39? That would be unprecedented.