With the Tim Kaine buzz having reached a fever pitch today, it might be worth sharing a couple of additional thoughts on the Virgina Governor. Chris Cillizza’s arguments for and against Kaine are a must-read, and lay out most of the checkmark arguments on his candidacy. Works well with Obama? Check. Speaks fluent Spanish? Check. But inexperienced on the national stage? Also a check. Not a particularly distinguished track record as governor? Check.

I think, however, that both Kaine’s greatest asset and his greatest liability may have been missed. The liability, as I have argued before, is that he may not be of much help to Obama in Virginia. After Virginia’s General Assembly session ended badly earlier this summer, Kaine’s favorability numbers took a hit, and are now no better than 50:50. Alternatively, one can read the comments from some of the Virginians in our earlier thread, most of whom are quite skeptical of Kaine. Kaine does not have any one signature, standout accomplishment as governor, and the standoff in the General Assembly cost him a lot of credibility. The home state VP bounce is small enough to begin with that for a candidate who has trouble hitting 50 percent favorability in his home state, it may be non-existent. And in terms of wooing McCain voters over to the Democratic side, he may be particularly unhelpful, as just 23 percent of McCain voters in Rasmussen’s July survey had a favorable opinion of him.

On the other hand, the Obama campaign is smart enough to know that a VP’s ability to carry his home state is a relatively minor factor in the grand scheme of things. The more important question is what sort of brand space he would come to occupy once introduced to the nation at large (to whom Kaine is a literal unknown). On that front, the news is a little better for Kaine and Obama.

I spent about 20 minutes watching different videos of Tim Kaine and here was the impression I was left with: Kaine comes across as very warm. Empathetic. Normal guy. Not polician-y. Can be fiery at times, and sometimes a little flatter, but neither a technocrat nor a screaming populist.

He’s not a rock star. He’s an average-looking guy, which is to say, for a politician, he has below-average looks. An Obama-Kaine ticket would NOT be this: 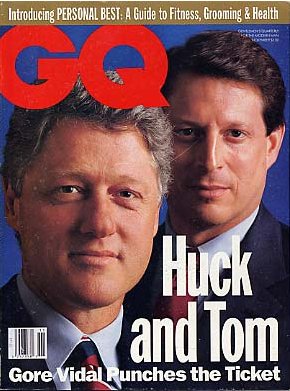 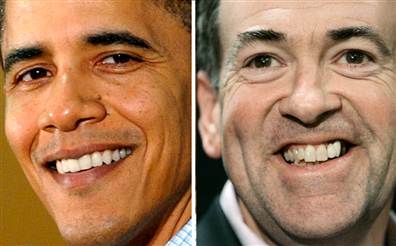 That’s Huckabee — not Huck Finn. Kaine does not have Huckabee’s corny sense of humor, but he does have much of his sense of humility. He will eventually poll well with older voters, and probably with women.

The trade-off is that Kaine, especially when coupled with his relatively undistinguished record in public office, will not come across as especially presidential. Voters looking for an experienced hand to guide Barack Obama will not really be getting it.

But, I would argue, the experience issue is not really one of the greater threats to Barack Obama at the moment — in fact, the McCain campaign has completely deemphasized it. A greater problem is that Obama can come across as aloof and arrogant — or messianic, in the right’s favorite phrasing. As Jay Cost ably argues, this has the potential to detract significantly from Obama’s core narrative. Kaine would bring humility and good humor to the ticket, and would go some way toward hedging that risk. He would not be a VP designed to win over converts, so much as to shore up some of Obama’s weak and wavering support.