On the eve of the first Presidential Debate, Barack Obama is perhaps in as strong a position in the polls as he has been all year, now projecting to win the election 74.7 percent of the time. Both the state and the national polls that have come out within the past 48 hours have generally been quite favorable to Obama, and suggest that he may gained an additional point or so above and beyond his “Lehman Leap” from last week.

Still, there are a couple of silver linings for McCain in the state polling: 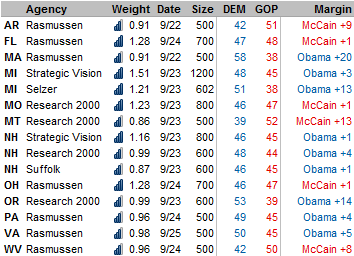 Wait, which silver linings? Well, McCain gets good numbers in West Virginia and Montana, two states that looked like they might just have been on the verge of being competitive. And although Obama looks as though he’s slightly ahead in New Hampshire, it also looks to be polling behind his national numbers — we project Obama to win New Hampshire by 0.7 points, but the national popular vote by 2.9 points. So if the race tightens up, Obama may no longer be able to bank on New Hampshire’s 4 electoral votes.