This was one messy little day in politics. I was on a train up to Wisconsin, where I’m going to be giving a presentation tomorrow, and during that time not only had John McCain “suspended” his campaign — but SurveyUSA had actually put out polling on it!

Likewise, the polls today are a big sloppy mess: 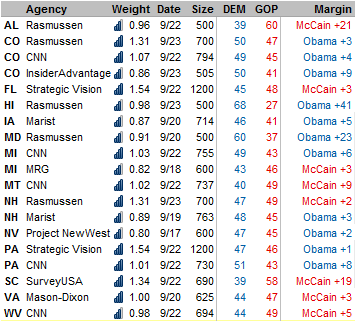 How can Barack Obama be 8 points ahead in Pennsylvania according to CNN, but 1 point ahead according to Strategic Vision? Because Strategic Vision’s polls have had a 2-3 point Republican lean so far this cycle, and CNN’s have had a 1-2 point Democratic lean. If you are able to account for that — and we do — the two polls are within one’s anothers margin of error.

And even the polls that don’t contradict one another require various sorts of caveating. No, I’ve never heard of the MRG poll in Michigan, nor the Project New West poll in Nevada, but they don’t fail any of our bright line tests, so they’re in. And remember that we’re still using the registed voter versions of these polls where we have the choice, which is why the Obama’s leads in the Marist polls in New Hamshpire and Iowa are smaller than you might see listed elsewhere … Democrats seem to be closing and in some cases reversing the likely/registered voter gap, which means that the enthusiasm gap may also be widening again. We will switch over to the likely voter version following the debate on Friday (if there is one!)

The only thing we can say for certain is that things are going well for Obama in Colorado, where all polls have him ticking upward fairly sharply, and all have him polling ahead of his national numbers. But this is a day where it’s probably best to take a mulligan and wait a day or so for things to settle down.