We may now be getting a firmer sense of how the electoral map has changed in the post-convention universe: 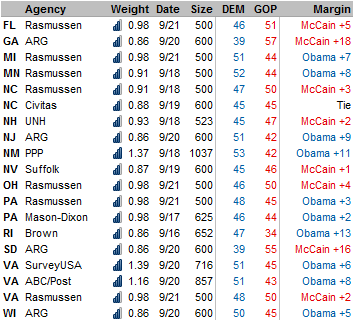 Where is Obama polling well? In Virginia and North Carolina, where he gets a couple of very strong numbers today. Both SurveyUSA and the ABC/Post poll show him with a lead outside of the margin of error in Virginia, although the latter depends on just which version of the poll you use (we use the registered voter version with third-party candidates included; as of next week, we’ll switch over to the likely voter versions). And in North Carolina, Civitas confirms PPP’s finding from yesterday and shows the race as a dead heat. Rasmussen is more tepid on both states, but still, the trend on balance is favorable for Obama in this part of the country.

Virginia is now projecting very slightly ahead of Obama’s national trendline, and would seem to represent a better pickup opportunity for him than Ohio. I’d assume that the Obama campaign is fairly pleased with that, because this is a state where they overperformed during the primaries, where they have Tim Kaine in the governor’s mansion, and where the Republicans don’t have quite as much of a ground game, as they are not used to having to defend the state in Presidential cycles (remember, John McCain is mostly relying on George W. Bush’s scraps from 2004).

So where isn’t Obama polling so well? In Ohio and Pennsylvania, where his numbers remain sluggish. While Obama would very probably win Pennsylvania if the election were held today — he ticked up a couple of points in Rasmussen’s numbers — it has gradually moved toward Obama’s national averages. What that means is that if the national numbers revert to a tie, Pennsylvania may be vulnerable, which is why it has moved up and now rates as the most important tipping point state.

The model’s thinking is basically this: in a very close election, Obama probably won’t have too many problems flipping enough Bush states. Iowa and New Mexico seem to be absolutely in the bag for him. And somewhere — maybe Colorado, maybe Virginia, or, somewhat less likely, Ohio, Indiana, Florida, Nevada or North Carolina — he’ll pick up that last state he needs to get him to 269 or 270 electoral votes. We don’t know exactly which one of these states he’ll flip, but he’d have to have a fairly bad run of luck to come up short in all of them, particularly as they are pretty well diversified across the demographic spectrum. But all of this could be for naught if he blows Pennsylvania or Michigan. Michigan seems to be moving in his direction, whereas Pennsylvania is going the opposite way.

(Why are the states moving in opposite directions? Michigan has notably higher unemployment than Pennsylvania — meaning that Obama’s newfound economic populism may have better resonance there — whereas Pennsylvania has a lot of pro-life moderate Cathloics, a group with whom Sarah Palin probably performs well).

Obama doesn’t appear to have any such problems in Minnesota and Wisconsin, each of which gave him a good poll today, and which probably represent big teases for McCain. But he does have trouble in New Hampshire, where the University of New Hampshire gives McCain a 2-point lead. This was a weird little poll — it was in the field for a week and there are different versions floating around of its numbers — but UNH has a strong track record, and with little other polling to look at in the Granite State, it needs to be taken seriously.