Barack Obama continues to move upward slightly in our electoral projections on the strength of strong national tracking polls. Rasmussen attributes him with a lead — though it’s just one point — for the first time in ten days, while Gallup has him hitting the 50-percent barrier for just the second time all year, and expanding his lead over John McCain to 6 points overall. Our model has now more or less fully caught up with Obama’s “Lehman Leap”, and so he cannot expect too many more gains from inertia alone.

The state polling out today, however, presents a more complicated picture, including some decent results for John McCain: 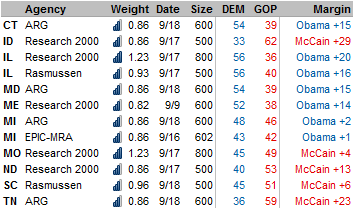 Let’s start in Missouri, where a Research 2000 poll for the St. Louis Post-Dispatch gives McCain a 4 point lead. Research 2000 had been just about the only poll to show a lead for Obama in Missouri before, and with that evaporating, the state would seem to be pretty unlikely to change colors. Although Obama has a robust field operation in Missouri, he has not visited the state since July. Indiana — where the McCain campaign is gambling by not fielding a ground organization and which is partly in Chicago’s backyard — may present the more interesting opportunity.

Two new polls in Michigan, from ARG and EPIC-MRA (for the Detroit News) also show a tight race, with Obama leads of 2 points and 1, respectively. Each of these polls have had a slight Republican lean so far, and so they are not necessarily inconsistent with other polling that gives Obama a slightly more comfortable margin. Still, for the reasons I outlined at TNR last week, I think Michigan comes attached with more X-factors than, say, Pennsylvania or Wisconsin, and remains Obama’s most difficult defensive state.

The rest of these numbers are relatively inconsequential, although the Research 2000 poll in Maine, which I had completely missed when it came out last week, somewhat contradicts the Rasmussen polling suggesting that the race has tightened there.