Changes of this velocity are unusual outside of the convention periods and the debates, especially in close elections. It took John McCain about 60 days and tens of millions of advertising dollars to whittle Obama’s lead down from roughly 5 points at its peak in early June, to the 1-point lead that Obama held heading into the conventions. Obama has swing the numbers that much in barely a week.

Of course, we never really were entirely outside of gravitational field of the conventions, and probably at least half of this bounceback for Obama is merely the more-or-less inevitable consequence of McCain’s convention bounce ending. But the fact is that Obama is in a stronger position now than he was immediately before the conventions. We now have him winning the election 71.5 percent of the time, which is about as high as that number has been all year.

There are two reasons why that number is as high as it is. Firstly, we are more than halfway through the penultimate month of the campaign, so even relatively small leads are fairly meaningful. But secondly, Obama has developed a structural advantage in the Electoral College that is understated by the popular vote margin. If we break the election down into its four fundamental scenarios, it looks like this:

Obama is roughly a 63/37 favorite to win the popular vote — numbers that ought intuitively to look pretty reasonable for a candidate who holds a 2-point national lead fortysome days before the election. It’s that 9 percent of the time he wins the Electoral College while losing the popular vote that make his 2-point lead much more robust. If the states maintain their positioning relative to one another — and they may well not — Obama probably has about a 1-point cushion in which he’ll remain the favorite to win the Electoral College even while losing the popular vote.

Transitioning to the state-level picture: 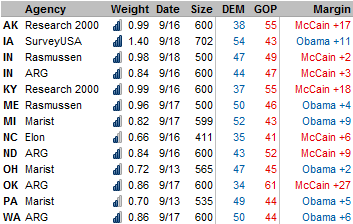 The set of Marist polls out today are certainly good ones for Barack Obama, particularly as both the Ohio and Pennsylvania numbers are several days old, taken before Obama’s Lehman Leap had really taken hold. However, they need to be caveatted. The Marist polls do not have any particular partisan lean; somewhat infamously, they at one point gave McCain a 2-point lead over Obama in New York. But they simply are not very reliable, placing toward the bottom of our pollster ratings, and employing relatively small sample sizes. Still, we can probably conclude that the situation in Michigan looks quite good for Obama, and that Pennsylvania now represents McCain’s most important offensive state.

Iowa, where SurveyUSA gives Obama an 11-point lead, no longer appears to be in play. Three of the last four polls have shown a double-digit Obama lead, making yesterday’s Big Ten poll, which showed a tie there, appear to be the odd poll out. If the McCain campaign wants to continue to spend resources in Iowa, a state where they have never led a single public poll against Obama, they do so at their own peril.

Indiana, where both Rasmussen and ARG show a tight race, is one place where Obama appears to have gained ground in the post-convention period, somewhat contradicting the trend observed in other, traditionally red states. Although Obama can win Indiana, I still doubt that it’s going to be close enough to the tipping point to warrant treatment as a first-tier swing state. (Could he win Indiana while losing Ohio? Probably not. And if he wins Ohio, he shouldn’t need Indiana). With that said, no state in the country has a greater disparity in ground game resources, the effects of which are hard to measure. Obama will probably not win the election because of Indiana, but on the off-chance that he does, McCain’s decision to blow off the state will instantly enter the Rudy Giuliani Memorial Electoral Hall of Shame.

The fly in Obama’s ointment is in Maine, where Ramsussen has Obama ahead by just 4 points. ARG’s poll earlier this week, which had his margin at 10, also showed a tightening race there. Maine is an unusual state with a fair number of Perot Independents. In terms of its political culture, it probably has more in common with the Pacific Northwest — another region where McCain’s numbers have improved slightly — than with the rest of New England.

There is room for additional concern because Maine splits its electoral votes by Congressional District, and there is some thought that rural ME-2 may take well to Sarah Palin. However, ME-1 and ME-2 usually vote very similarly, and ME-2 is not entirely unlike Vermont, where Obama’s polling has been quite strong. Also, Obama’s campaign isn’t about to be taken by surprise, boasting 12 field offices in Maine. For the time being, that one electoral vote in ME-2 is more one for Obama to monitor than one for him to lose sleep over.