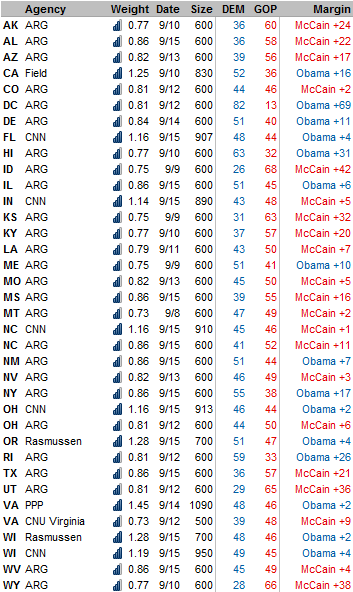 There are certainly some hints that Barack Obama has gained back a couple of points’ worth of ground in the past 24-96 hours, although so far this remains more apparent in the national trackers than in state polling. Our model is designed to react somewhat conservatively to new information, lest it mistake noise for signal. I know that a lot of Democrats out there — including myself, frankly — believe that the movement is real, as the country reacts to the Wall Street crisis and other news from the campaign trail. But there have been other points — such as following Obama’s Berlin speech — in which the polls changed sharply for a couple of days and then settled back down.

One of the disadvantages of the method we use to model our trendline curve (LOESS regression) is that there is no a priori answer as to just how sensitive the curve should be in terms of reacting to new information. My attempts to come up with an empirical answer were mostly fruitless, although there is some evidence that the curve should become more sensitive as we get closer to the election. A week or so ago, as the model was slow to recognize the McCain bounce; I tuned the sensitivity up slightly then, and I tuned it up very slightly again today. I will also make the curve quite sensitive in the week or so before the election, such that we can adequately capture any late movement. But for the time being, Obama is either going to have to sustain his relatively strong tracking poll results for a couple more days, or get some slightly more consistent results from the state polling, before we are again ready to call the race a tie or an Obama lead.

The other thing that’s happening is that, even as the popular vote gap has narrowed, the gap between the popular vote and the Electoral College — which had been working to Obama’s benefit — has also diminished. We now show about a 7 percent chance that Obama would win the Electoral College while losing the popular vote; a couple of days ago, that figure had been as high as 12 percent. This is mostly because the state-by-state polling has been frankly very difficult to interpret in the post-convention period. There are four key states in which Obama is hoping to play offense: Colorado, Virginia, Ohio and Florida. Winning any one of those states will probably win him the election. But in each of these states he has had a mix of good and bad polling. In Colorado in particular, which is probably the most favorable to him of these states, the two polls out this week (ARG and Rasmussen) have shown him slightly behind.

Much of today’s polling is from American Research Group, which has numbers out in 25 states and the District of Columbia. ARG, as regular readers of this site should know, is not the most terrific pollster, but with that said most of these results look pretty reasonable. The results that have caught people’s attention are McCain’s relatively strong performance in Illinois and Obama’s relatively strong performance in Montana and West Virginia. Some of these — particularly the Illinois number — are probably outliers (ARG also had some very weird results in Illinois during the Democratic primaries). But if a pollster puts out 20 or 30 polls, mathematically outliers are bound to happen in at least a couple of states. Fortunately, our model has numerous ways to hedge against the results of outlier polls, and so this isn’t something you should spend a great deal of time worrying about.

CNN/Time also has some very favorable looking results for Obama, particularly in Florida and Ohio, where he leads by 4 and 2 points respectively with third-party candidates included. (This is the version of the polls that we prefer; other sites will use the version without third-party candidates). These CNN polls are very recent, so it’s possible that they’re detecting some kind of very current shift toward Obama. On the other hand, our model also identifies the CNN/Time polls as having as having a Democratic lean of a point or two, and hedges slightly against these numbers as a result.