Although the national tracking polls are trending upward for Obama, this set of state polling is a strong one for John McCain: 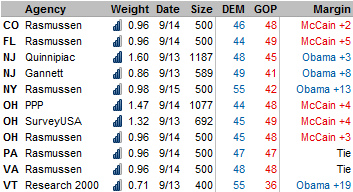 Ohio, certainly, is a Lean McCain state now. It has been polled extensively over the past week, and all polls but Quinnipiac show McCain with a lead in the neighborhood of 3-4 points. As we’re getting into electoral crunch time, the key dynamic to watch is the performance of the three or four tipping point states like Ohio, Virginia, and Colorado, both relative to one another and relative to the national popular vote estimate. Presently, Ohio is polling slightly behind Obama’s national numbers, whereas Colorado is polling a point or so ahead. If this dynamic continues, then Ohio will gradually become less important, placing more emphasis on either Obama’s IA/NM/CO parlay, or perhaps Virginia, which is one state where he’s had some favorable polling of late.

Looking quickly through the rest of the numbers, this set of Rasmussen polling is fairly poor for Obama, although some of that is caused by the fact that Rasmussen just re-weighted its party ID targets, producing a shift of a point or so toward John McCain. (Rasmussen’s re-weightings may well be perfectly valid — my goal is merely to provide context here).

Meanwhile, polling in the New York/New Jersey region has shown some bounce for John McCain. It’s probably too late for the McCain campaign to devote serious resources to New Jersey, but it might make fo an interesting target if they did. Then again, most of these polls overlapped with 9/11, and it’s possible that there’s some sort of 9/11 effect in the region.