Although we think that John McCain may still be in the midst of some sort of convention bump, so far there has been no real letting up of his improved performance in state-level polling: 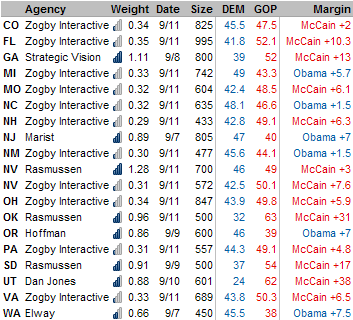 Ignore, for a moment, the series of Internet-based polls that John Zogby released today. What else do we see?

We see John McCain continue to consolidate his advantage in red states like Utah and South Dakota.

We see Nevada polling pretty close to the national averages, as it has all year. Right now, our model forecasts a 2.2-point victory for John McCain in Nevada, versus a 2.4-point victory nationwide. Just as was the case when Barack Obama was leading in the national polls, the key metric for determining resource allocation is not a state’s standing in the absolute sense, but where it stands relative to the national numbers. Nevada remains an important state because it’s polling so close to the national averages. Conversely, something like Wisconsin, though certainly winnable for John McCain, is polling about 7 points better for the Democrats than their national estimate, which means that it is unlikely to be a decisive state. New Jersey is also a good example. We see some evidence that it has tightened (Marist has him 7 points ahead among registered voters — the version we will use until the first debate — but just 3 points ahead among likely voters). But it is still polling at a considerable enough distance from Obama’s national averages that it is unlikely to serve as any sort of tipping point.

We do see a couple of polls showing Obama’s numbers holding up reasonably well in the Pacific Northwest, though the Elway poll in Washington is a bit weird. They split their sample into two, using different phrasings for each group; half the sample was asked a question that included the names of the VP candidates (e.g. “Barack Obama and Joe Biden”) and half got the top of the ticket only. Obama led by 9 points with the veeps included and 6 points without. Each of these are perfectly valid ways to ask the horse race question, so we simply average the two numbers and combine the samples.

…As for the Zogby Interactive polls, I tend to prefer to let them speak for themselves. Obama ahead in North Carolina but 6-7 points down in Virginia? I don’t find that especially credible. Anyway, they’re in our model, but given a very low weight.

I’ve also made one methodological fix. Alaska, because of the selection of Sarah Palin, was having some weird effects on our various sorts of regression analysis that we use throughout our model. Alaska has a lot of young voters, for instance, and so when the model sees that McCain has picked up 20 points or so in Alaska, it says “Gee Whiz! Obama must be tanking among young voters!”. So in other states with a lot of young voters, like Colorado, Obama was getting harmed by this, whereas the opposite might have been true in a state without many young voters like Florida. But really this pattern had nothing to do with young voters, and everything to do with the fact that Alaska is Sarah Palin’s home base; it hadn’t manifested itself in other states with substantial youth populations. To correct for this, I have simply pulled Alaska (and Delaware) from the sample whenever we’re calculating a regression, which produces what I find to be somewhat more intuitive-looking results.