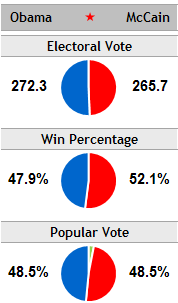 Our popular vote projection shows a literal tie, with each of Barack Obama and John McCain projected to earn 48.5 percent of the vote, and third-party candidates receiving a collective 3 percent.

Things get confusing, however, when looking at the electoral college. We project Obama to earn slightly more electoral votes on average. However, we also project John McCain to win the election slightly more often. What accounts for the discrepancy? Obama’s wins tend to be larger, and McCain’s tend to be smaller. If Obama wins this election by between 7 or 10 points, there are very few high-EV states that he won’t be able to put into play; even something like Texas is probably winnable. If McCain were to win by that margin, on the other hand, he would still almost certainly lose New York, he would almost certainly lose Illinois, and he would almost certainly lose California. Those states represent 107 electoral votes that are essentially off-limits to McCain, even on his very best days.

But when the election is close — and this is the case that we really care about — McCain has appeared to develop a slight advantage in the electoral math. There are several states on our map that are colored light pink, meaning that they tip very slightly to the Republicans; these include Colorado, Ohio, Virginia, Florida, Montana and Nevada, in each of which Obama has better than a 25 percent chance of winning, but less than a 50 percent chance. There are a fairly large number of scenarios, then, where Obama comes tantalizingly close to a victory, but loses several different battleground states by mere points or fractions thereof. This dynamic is fairly fluid, however, and if Obama were able to get a toehold somewhere like Colorado or Virginia, it could quickly reverse itself.

Does all of this mean that you should short Obama in the futures markets, which still show him as roughly a 60:40 favorite?

Not necessarily. Our model accounts for the topline results of the polls in as comprehensive a way as is possible, but it does not account for nonpolling factors such as turnout and ground game, macroeconomic conditions, or the probability of certain future events (like the conventions) tending to favor one or another candidate. The Obama campaign, I think, has good reasons not to panic; the facts and figures that we hear about their ground game in off-record conversations never fail to impress, and the campaign has a keen sense of how to play out the rest of the political calendar, in contrast to recent weeks where they had let McCain dictate the narrative. But the McCain campaign, just as surely, has reason to be pleased. Their candidate was never going to win a blowout election, but they are setting themselves up well to win a close one.

Finally, here are the state polling results, which we’ll simply present today as a data dump.