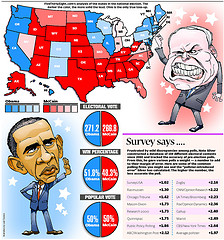 It’s going to be a busy day, so let’s get some housekeeping out of the way first.

Firstly, I was invited to write a guest column today in the New York Post, which you can find here:

It was a Sunday evening, two days before the 2004 presidential election, and Vice President Dick Cheney was aboard Air Force Two, on his way to Hawaii.

What was Cheney doing 30,000 feet above the Pacific Ocean instead of attending to some swing state like Ohio or Florida? Days before, a poll had come out in the Honolulu Advertiser showing Bush-Cheney tied with Kerry-Edwards in the state, at 43 percent of the vote each. This was considered a surprise; Al Gore had carried Hawaii by 18 points. But it was the first Hawaii poll to come out in months, and Cheney decided to gamble some of his limited time on the state’s four electoral votes.

It proved not to be worth the jet fuel – Kerry won Hawaii by a 9-point margin. But it was nevertheless a watershed moment in the history of polling. Instead of the campaign dictating polling, the polls were now dictating campaign strategy.

Secondly, you’re going to be seeing contributions from a new, very talented blogger, and I’ve also got a guest feature to roll out from one of my colleagues at Baseball Prospectus — more on this in the coming days.

But now, onto the polls. Three of them out today, and they all tend to confirm our existing impressions of their respective states. Rasmussen has John McCain 9 points ahead of Barack Obama (and 7 points ahead of Hillary Clinton) in Louisiana. That’s just slightly stronger than Obama has performed in other Louisiana polls, but probably outside the range where it can be considered competitive in any way, shape or form.

Meanwhile, in Massachusetts, Rasmussen has Obama ahead by 13 and Clinton ahead by 30. Massachusetts has at times been a frustrating state for Obama, first when he lost it badly in the primaries and then when some earlier polling had come out showing it to be potentially competitive. But at the end of the day the Democrats’ party ID advantage is too overwhelming in Massachusetts to give McCain much of a chance.

Finally, in Nebraska, SurveyUSA has McCain 12 points ahead. However, the poll also shows the race tied in NE-1, meaning that Obama could potentially pick up an electoral vote from that district. We had initially thought that NE-2, which consists mostly of Omaha, might be Obama’s better opportunity to pick up an electoral vote in Nebraska. But NE-1 includes the college town of Lincoln, and also shares a long border with Iowa, where Obama is very well liked. Both NE-1 and NE-2 are worth keeping an eye on.