One of our largest collections of polling data in some time: 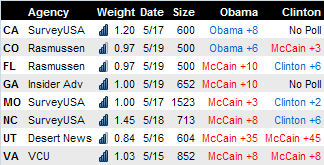 For Obama, his electoral map is sharpening. He’s presently winning all Kerry states except for New Hampshire, although he makes up for that with a safe-looking lead in Iowa. In order to win the election, he’ll either need to:

1) Win Ohio (while holding Michigan and Wisconsin), or
2) Win two or three of the Western “four corner” states (NV, CO, NM) and either Ohio or Michigan.

By contrast, the “Southern Strategy” of putting states like North Carolina, Virginia and Florida into play does not appear to be polling especially strongly for him at the moment. If he needs a third alternative, he might stand a better chance by aiming to flip the Midwest-Southern hybrid states of Missouri (where he’s still trailing, but these numbers are an improvement) and Indiana.

As for Clinton, she’s had a couple of weeks where she’s been polling pretty strongly everywhere. I would not pay especially much attention to the SurveyUSA poll showing her ahead by 6 in North Carolina. I am not saying it is an ‘outlier’; I agree with Charles Franklin‘s philosophy that there is no such thing as an outlier. But this is the whole point of taking a weighted average of polls, and other polling in North Carolina has not shown her especially competitive.

Nevertheless, Clinton certainly seems to have improved her hand in the South — I haven’t looked to see whether she’s getting more of the white Southern vote, or whether some black Southerners are starting to come back to her. The Florida and Missouri numbers definitely look good for her.

Somewhat counterintuitively, Clinton may actually have the broader electoral map than Obama, putting at least as many red states into play but also having more blue states that she’d need to defend. And for the time being, it is probably also the stronger electoral map, although the Obama folks can argue — not unreasonably — that things will change once the Democrats unify behind Obama, and also that Clinton’s map would look different had she been taking the frontrunner’s heat that Obama has been.

UPDATE: Inserted SurveyUSA’s California poll, and corrected the sample size on Missouri. It was actually quite a large poll (1,523 respondents), helping both Democrats.