Two new polls today. In New Jersey, Farleigh-Dicksinson has both Democrats leading John McCain by 5 points. This is similar to FDU’s last poll of the state, which showed Clinton ahead by 5 and Obama by 4, and qualifies as slightly reassuring news for the Dems in a state where polls have shown McCain being reasonably competitive.

But the bigger news for our purposes is the Strategic Vision poll of Pennsylvania that’s being reported by MSNBC and Political Wire. The poll shows Obama closing the gap in the Democratic primary matchup to 8 points — but it also shows Hillary leading her general election trial heat by 6 points, whereas Obama trails his by 5. The poll has not been released officially yet, but I’m assuming that the leaked reports are accurate and that the sample size is the same as Strategic Vision’s last poll of the state (1,200). A little bit of snap analysis below the fold.

If we look at the two polls, Strategic Vision and Quinnipiac, where we can extrapolate trendlines in Pennsylvania, we see two things:

1. Obama improved by about 10 points in his primary matchup, a result also seen in other polls of the state.
2. Hillary has improved her general election standing by a solid margin against John McCain. She went from a +2 against McCain in Quinnipiac’s last poll to a +8 in yesterday’s, and a -6 in Strategic Vision to a +6. Obama’s general election numbers, meanwhile, have essentially been static. He went from a +2 in Quinnipiac to a +4, but fell from a -3 in Strategic Vision to a -5.

So what’s going on? In the primaries, Obama is likely gaining support with some of those white Catholics that Chris Matthews likes to talk about. Frankly, I never bought that Obama was at risk of losing Pennsylvania by 20 points. Pennsylvania has generally run about 10 points behind the national polling averages for Obama. Right now, he’s ahead by 3 or 4 points in the national primary polls against Clinton, and behind by 6 or 7 in the Pennsylvania polling averages, so that would account for the 10-point margin.

But Pennsylvania has a closed primary, and if I’m right, those Chris Matthews Catholics were never the vote that Obama had to worry about losing in the general election anyway. He’s converting Type 1 voters (Clinton-Obama-McCain) to Type 2 voters (Obama-Clinton-McCain).

So where is Hillary gaining her general election support from? From independents? Not exactly. Take a look at the Quinnpiac internals by party identification: 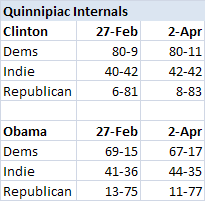 Unless Quinnipiac has shifted its party identification model — which it has every reason to do, because of the surge of Democratic registration in the state. So Hillary hasn’t moved up in any of the individual groups. But the size of the Democratic group is now larger, and she benefits from that more than Obama because there are still some Democrats in Pennsylvania that won’t vote for Obama in the general: likely not the Chris Matthews Catholics, but the conservative Type 3 (Clinton-McCain-Obama) Democrats in the Pennsyltucky parts of the state. Pennsylvania does not have a lot of Southern Baptists, but 21.5% of its population consists of white evangelicals of other types, who may behave similarly.

At least that’s what I think is going on. We should have no lack of polling data in Pennsylvania between now and the primary to track everyone’s progress.