SurveyUSA has a new round of polling out in more than a dozen states. Let’s run the numbers first and then let’s talk. 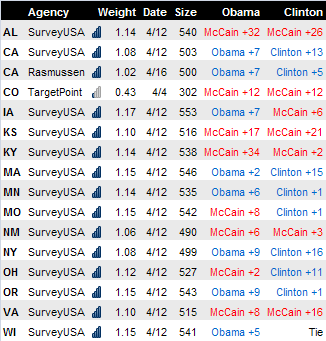 These are generally, although not uniformly, a poor set of polls for Barack Obama. The ones that are perhaps especially problematic for him are in Virginia and New Mexico, states where SurveyUSA has generally showed him running fairly well. The Ohio result, naturally, is important, although that’s consistent with what we’ve seen in other polling. And SurveyUSA shows a close race for Obama in Massachusetts, as it has all cycle; it would be nice to be able to look at another pollster’s numbers on that race.

As you can see, Obama’s win percentage against John McCain has declined to its lowest ever number, 41.4%, which leaves him essentially tied with Hillary Clinton, who is presently at 40.2%. When we began this project, the polls indicated that Obama was at a hair over 60% to win an election against John McCain; that number has now fallen by more than 20 points.

But for the Obamaphiles in the crowd who are inclined to panic, a couple of things to keep in mind: Firstly, even in a bad set of surveys, Obama retains some areas of strength. These are, particularly, the Pacific Northwest region and our North Central (e.g. Upper Midwest) region. In Wisconsin, Minnesota, Iowa, as well as in Washington and Oregon, Obama is likely to win fairly easily, whereas all of those states are in play in a Clinton-McCain contest. It’s these states, plus neighboring Michigan — which will not be a slam dunk for Obama but appears to be a better state for him than for Clinton — that account for why Obama is still at least tied with Clinton overall, in spite of performing worse than her in Ohio, Pennsylvania, and Florida.

Secondly, notice that the SurveyUSA polls were taken over the weekend, just as the bittergate controversy was hitting the radar. Keep in mind my prediction about bittergate, which is that it would have no real impact on the Democratic primary numbers, but perhaps a couple of points worth of medium-term impact on Obama’s general election numbers. So far, that prediction has been pretty well borne out.

The other dynamic in play here is something that I call ‘timing bias’: pollsters tend to release surveys in the wake of major news events. Consider, for instance, that the last time SurveyUSA released a big set of polls was just as the Jeremiah Wright controversy was breaking. Naturally, pollsters (and the clients they work for) want to gauge the electoral reaction to important events in the news cycle. But really, if you buy one of my fundamental arguments about polling, which is that most bounces are just that — temporary aberrations in the polling numbers — these are the very worst times to release polls. And it cuts both ways. If, say, Obama wins Indiana, and essentially concludes the nomination with an ‘upset’ victory, we’ll probably see a lot of polls released in the aftermath of that. Those numbers too, I’m guessing, would likely show a fairly big bounce for Obama — and that bounce too, I’m guessing, might well prove to be ephemeral. It’s helpful to have a pollster like Rasmussen on hand, which releases its polling data in dribs and drabs, rather than in big chunks.

Thirdly, our previous analysis shows that with a unified Democratic party behind him, Obama is likely to have a superior hand to play to Clinton’s.

p.s. One result I wouldn’t worry about for Obama: the TargetPoint poll showing him trailing McCain by 12 points in Colorado. Whatever hit Obama has taken, it does not appear to be in states like Minnesota and Washington, that are similar to Colorado demographically. And TargetPoint surveyed this contest on behalf of a Republican advocacy firm, and over small (~300 voters) sample sizes.