With fewer than six hours until voting begins in Dixville Notch, New Hampshire, the national polling picture has cleared up considerably. Barack Obama is on the verge of a victory, perhaps a decisive victory, in the race for the White House.

The national polls have all consolidated into a range of roughly Obama +7. That is right about where our model sees the race as well, giving Obama a 6.8 point advantage in its composite of state and national polling. Our model notes, however, that candidates with large leads in the polls have had some tendency to underperform marginally on election day, and so projects an Obama win of 6.0 points tomorrow.

Far more important, of course, is the race for 270 electors. It appears almost certain that Obama will capture all of the states won by John Kerry in 2008. Pennsylvania, while certainly having tightened somewhat over the course of the past two weeks, appears to be holding at a margin of about +8 for Obama, with very few remaining undecideds. Obama also appears almost certain to capture Iowa and New Mexico, which were won by Al Gore in 2000. Collectively, these states total 264 electoral votes, leaving Obama just 5 votes shy of a tie and 6 of a win.

Obama has any number of states to collect those 5 or 6 votes. In inverse order of difficulty, these include Colorado, Virginia, Nevada, Ohio, Florida, North Carolina, Missouri and Indiana. Obama is the signficant favorite in several of these states; winning any one of them may be fairly difficult for John McCain, but winning all of them at once, as John McCain probably must do, is nearly impossible.

McCain’s chances, in essence, boil down to the polling being significantly wrong, for such reasons as a Bradley Effect or “Shy Tory” Effect, or extreme complacency among Democratic voters. Our model recognizes that the actual margins of error in polling are much larger than the purported ones, and that when polls are wrong, they are often wrong in the same direction.

However, even if these phenomenon are manifest to some extent, it is unlikely that they are worth a full 6-7 points for McCain. Moreover, there are at least as many reasons to think that the polls are understating Obama’s support, because of such factors as the cellphone problem, his superior groundgame operation, and the substantial lead that he has built up among early voters.

McCain’s chances of victory are estimated at 1.9 percent, their lowest total of the year.

Our final polling update of the campaign will follow in the early afternoon tomorrow. 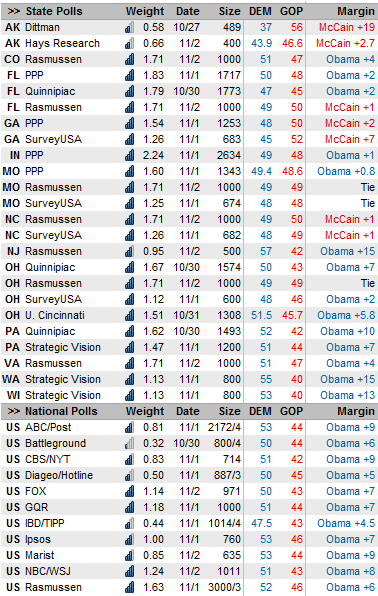