This is beginning to look like a five-state election. Those states are Virginia, Colorado, Pennsylvania, Ohio and Nevada. Essentially all relevant electoral scenarios involve some combination of these five states.

I should caution that by far the most likely scenario is that Obama wins some relatively decisive victory of anywhere from 3-12 points in the popular vote. If Obama wins the popular vote by anything in this range, he will find plenty of blue territory, accumulating somewhere between 300-400 electoral votes. The electoral math will matter very little.

We can probably assume, however, that IF the national polls tighten significantly (and to reiterate, the likelihood is that they will NOT), McCain will edge out a victory in North Carolina, Florida, Indiana, North Dakota, Montana, Georgia, and Missouri; put those states in the McCain column for the time being. Likewise, New Mexico, New Hampshire, Minnesota, Michigan, Wisconsin and Iowa all appear safe for Obama, even in the case of significant tightening. Put those in the Obama column.

That leaves our five states in play. The victory conditions for Obama involving these five states proceed something as follows:

1. Win Pennsylvania and ANY ONE of Colorado, Virginia, Ohio, or Nevada*
2. Win Ohio and EITHER Colorado OR Virginia.
3. Win Colorado AND Virginia AND Nevada.

(* Nevada produces a 269-269 tie, which would probably be resolved for Obama in the House of Represenatives.)

Now, suppose you think that Colorado is already in the bag for Obama because of his large edge in early voting there. We can then simplify the victory conditions as follows:

That’s basically what it comes down to, although I’m sure each campaign would claim that there are a larger number of states in play.

Sorry to get off on such a tangent about this; I wanted to talk, for a change, about something other than whether the POLLS ARE TIGTHENING (!!!) or not. But as to that question, the evidence is again somewhat mixed. Contrary to other recent days, Obama gained ground in the national trackers on average, picking up points in Research 2000, Gallup and Rasmussen. The Zogby that Matt Drudge went on about turned out to be the only poll where he lost ground, while ABC/Post, IPD/TIPP and Hotline held steady.

However, our model does perceive about a point’s worth of tightening in the state polls. And the Pennslyvania polls have probably tightened by more than one point, although it is important to note that the four polls that show the state in the mid- single digits (Rasmussen, Mason-Dixon, ARG and Strategic Vision) have all had Republican leans so far this cycle. Pennsylvania is still an extreme long shot for John McCain — Obama is more likely to win Arizona than McCain the Keystone — just not quite the long-shot that it had looked like a couple of days ago. 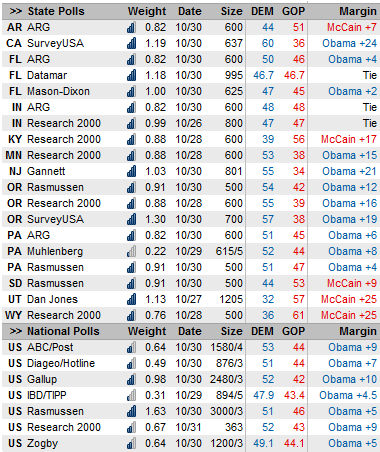