I’m short on time today, so let’s keep this on point: John McCain is in deep trouble. In spite of some incremental gains that McCain has made in some of the national tracking polls, the set of state polling that follows is so strong for Obama that he continues to hit record marks in all three of our projection metrics. We are now projecting Obama to win the election 90.5 percent of the time, with an average of 346.8 electoral votes, and a 5.4-point margin in the national popular vote. 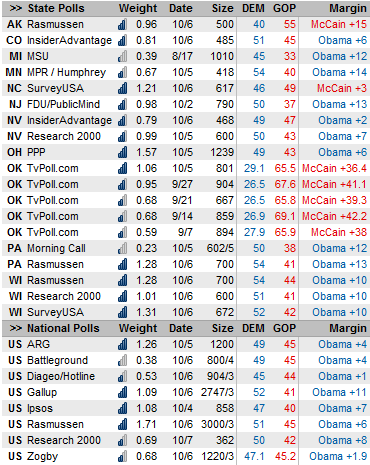 There simply isn’t any good news in here for John McCain (all right, he’s kicking butt in Oklahoma). The only swing state poll that he leads is the SurveyUSA result in North Carolina, but even there, Obama has bounced back from a 20-point deficit in a SuvreyUSA poll taken shortly after the Republican Convention.

Moreover, Obama’s position in the electoral vote remains even stronger than his position in the popular vote. We project him to win all of John Kerry’s states by at least 6.9 points (New Hampshire remains the weakest link). We also project him to win Iowa by 12.5 points, New Mexico by 7.7, Virginia by 7.3 and Colorado by 6.9. Getting this race back to a tie might not be sufficient for John McCain; he might need to pull ahead by 1 or even 2 points nationally to mitigate Obama’s edge in the battleground states.