As the political world’s focus shifts to the second presidential debate in Nashville, Barack Obama continues to expand his lead upon John McCain in all of our projection metrics, and now rates as almost a 9:1 favorte to win the election in November.

Both state and national polls are contributing to this result. Obama remains at his strongest-ever levels in the Rasmussen and Gallup tracking polls, leading McCain by 8 and 9 points, respectively. Although some of the other tracking polls — like Diageo/Hotline and the brand new Reuters/Zogby poll — show tighter race the Gallup and Rasmussen polls have by far the largest sample sizes, and so tend to get the most emphasis in the model.

Obama also gets a monster number from SurveyUSA in Pennsylvania, which has him leading by 15 points, up from a 6-point lead two weeks ago. SurveyUSA polls can be a bit volatile, but with that said, we now have multiple polls (Quinnipiac, Morning Call, West Chester/NPR) suggesting that Obama has a double-digit lead in Pennsylvania. We also show Pennsylvania moving back ahead of Michigan, projecting an 8.7-point win for Obama there as opposed to 8.4 points in the Wolverine State. The good news for McCain is that Pennsylvania is one of those states with absolutely no form of early voting, so while he’s got a lot of ground to make up, he wouldn’t be penalized for doing so late.

The set of CNN polling also contains good news for Obama, though CNN polls — which have had a Democratic lean this cycle — usually do. New Hampshire is another place where Obama’s numbers have improved recently; when coupled with his newfound strength in Pennsylvania, our model now assigns Obama a 69 percent chance to hold onto all of John Kerry’s blue states from 2004. 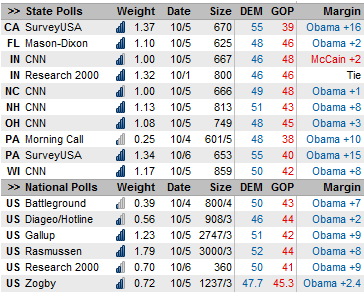