Are John McCain’s negative attacks succeeding in eating into some of Barack Obama’s support? They certainly aren’t yet. In fact, Barack Obama has had perhaps his strongest individual polling day of the year: 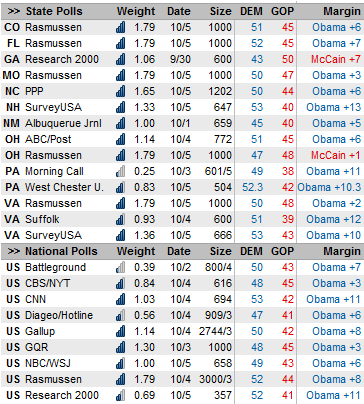 You can read these numbers as well as I can. Obama leads by 6 in North Carolina? 12 in Virginia? 7 in Florida? 3 in Missouri? Obviously, I am cherrypicking some of the more pro-Obama results here … but the point is, there are a lot of favorable results these days for Barack Obama.

The larger Obama’s margin in the popular vote becomes (and over the course of the past several weeks, he’s been gaining a full a point on McCain roughly every three days) the less the relative positioning of the states matters. For John McCain to get back into this race, he is going to need some dramatic events to occur, and we don’t know in which types of states such events might have a differential impact; something like an outbreak of hostilities in the Middle East could make a very different electoral footprint than new revelations about Barack Obama and William Ayers.

For that reason, the proper strategy is probably now to play a fairly large map; Obama in particular wants to keep as many doors open as possible if and when something bad happens to his campaign.

For the time being, however, John McCain is facing third and long — and appears that he’s about to get sacked.