This was something of a partly cloudy day for both candidates. The national polls generally contained reasonable news for Barack Obama, who advanced in four tracking polls to McCain’s three (Rasmussen was flat). In addition, Obama pulled strong numbers from the weekly editions of the GQR/Democracy Corps and Economist/YouGov polls.

On the other hand, this set of state polling contains some comforting nuggets for John McCain: 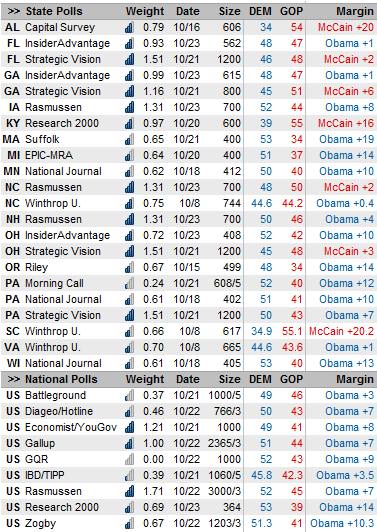 Strategic Vision has McCain narrowly ahead in both Florida and Ohio, and gaining ground in Pennslyvania. Strategic Vision is a Republican polling firm, and indeed has had a 2-3 point Republican lean this cycle, but nevertheless, these represent significant improvements for McCain in all three states from Strategic Vision’s last set of polling. Rasmussen, meanwhile, has him narrowly ahead in North Carolina — actually the first North Carolina poll that he’s led in some time — and closing his difference with Obama in New Hampshire, where his taxation message may be selling well.

Still, not all the news is good for McCain. Insider Advantage gives Barack Obama a large lead in Ohio (though note the survey’s small sample size), and perhaps more interestingly, a small lead in Georgia. There’s actually been quite a bit of polling in Georgia, and the consensus is certainly not that Obama is ahead; nevertheless, with a large proportion of new voters, it may be a difficult state to poll, and as Obama continues to bank votes in the state’s early voting period, it will be interesting to see how those numbers move. Michigan, meanwhile, where EPIC/MRA has Obama 14 points ahead, now looks completely out of reach for McCain.

On balance, we see this election as being very flat, but that is incrementally better news for McCain than yesterday’s horrible polling day, when he looked to be ceding further ground to Obama. McCain’s position has improved very slightly: we now give him a 5.1% chance of winning the election, up from 3.7% yesterday.