This is not the time when John McCain can afford a bad polling day. And yet he’s had perhaps his worst one of the year.

The national trackers were essentially a push — three moved toward Obama, two toward McCain, two were flat — but the action today is at the state level. And boy, there is a lot of action: 29 new state polls enterring our database. And many of them contain great news for Obama. 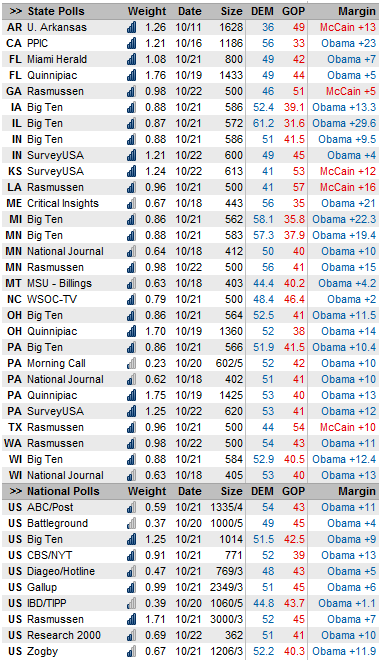 We already discussed the Big Ten and Quinnipiac polls, which are exceptionally strong for Obama across the board. But those aren’t the only places where he’s putting up some intimidating numbers. National Journal and SurveyUSA join Big Ten and Quinnipiac in giving Obama a double-digit lead in Pennsylvania, as does the Morning Call tracker. The Schroth Eldon & Associates poll for the Miami Herald and St. Pete Times in Florida, which has a fairly good reputation, puts him ahead by 7 in the Sunshine State. SurveyUSA now gives him a lead in Indiana, joining PPP and Big Ten; Indiana has turned blue on our map.

Obama even leads in Montana, a state which his campaign has never disengaged from, according to an MSU-Billings poll. Importantly, the MSU poll mentioned Ron Paul by name, who is on the ballot in Montana. He drew 4 percent of the vote, the precise difference between Obama and McCain. Furthermore, Obama’s strong results in deep red states like Montana and Indiana lead our model to conclude that North Dakota may in fact be in play, as well as two of Nebraska’s three congressional districts. If the election were held today, the Obama campaign might very well sweep every state on their target list.

To find good news for McCain, you have to go South — to the deep South — where new polling in Arkansas, Texas, and Louisiana suggests that those states have yet to become competitive.

As a result of all of this, there is now no perceptible rebound for John McCain; in fact, the race may still be trending toward Obama, although the safer assumption is that it’s flat. Meanwhile, Obama’s electoral position appears as strong as ever. John McCain’s chances of winning the election have dwindled to 3.7%, down from 6.5% yesterday.