After some incremental improvements by John McCain over the course of the past week, we are now looking once again a handful of polls showing Barack Obama with a double-digit lead — most dramatically his 14-point advantage in the latest Pew poll. Obama also gained ground in the aggregate of the national trackers, which showed four Obama gains (Zogby, Gallup, Pew, IBD/TIPP), one McCain gain (Battleground), and three pushes (Rasmussen, Research 2000, ABC/Post).

What we may have witnessed is some sort of dead cat bounce for John McCain. One possibility is that, as more voters are taking advantage of early voting windows across the country, the pollsters are finding that some voters whom they considered “unlikely” voters have in fact turned out to vote. Zogby gives Obama a 21-point lead nationwide among people who have already voted, and SurveyUSA and Civitas peg his advantage among early voters in North Carolina at around 20 and 30 points, respectively.

At the same time, between state and national polls, we are now seeing something like 30 sets of numbers released each day. Probability dictates that there are going to be a couple of outliers in each day’s sample. If we’re going to tout the Pew results, we probably ought to mention the latest results from GWU/Battleground, which have McCain down by just one point. Generally speaking, with this much data to look at, the rule of thumb is that when a poll looks like an outlier, it probably is one.

The state-level polls contain a mix of good and bad news for each candidate: 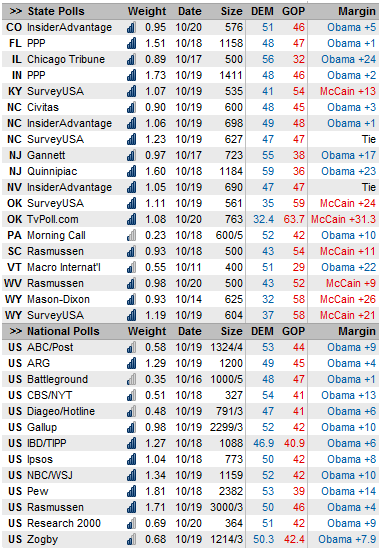 Here is more evidence, in this case from PPP, that Florida has tightened. The McCain campaign probably also has reason to feel a bit better about their standing in Ohio. Still — in spite of their historical importance as swing states — Florida and Ohio really constitute more of Obama’s Plan B, with Colorado and Virginia being the top tier. And there isn’t much evidence that Colorado and Virginia have tigthened (although InsiderAdvantage does have Obama’s lead narrowing a bit in the former).

The most noteworthy result for Obama is in Indiana, where PPP has him two points ahead. One noteworthy feature of Indiana is that it has had rather low turnout in recent elections, perhaps because neither party has really bothered to campaign there. As such, likely voter models which are rooted in past voting history may be unreliable. And according to Tom Jensen, Obama has a 68-24 lead among voters who did not cast a ballot in 2004. These are the sorts of statistics that the Obama campaign is looking at, and they’re why they remain very engaged in the Hoosier State.