It’s been a confusing day of polling — one of those where I’m happy to have a computer handy to do my dirty work for me. 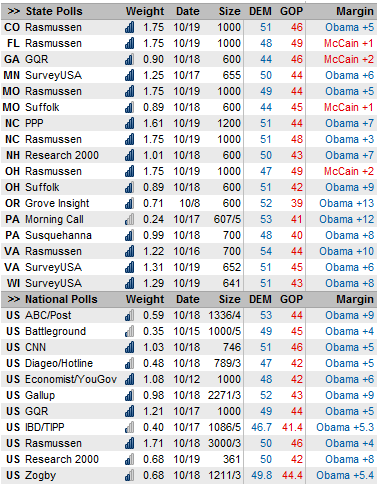 The trend over the past 7-10 days remains slightly toward McCain. It is difficult to pinpoint, however, just where the movement started. If I take the average of my daily point estimates from Thursday through Sunday — since the final presidential debate was concluded — I show Obama at a +6.0. That compares with a +6.6 in the ten days that proceeded the debate. However, looking at things even more precisely, it appears that the movement may have preceded the debate by a day or two, and that the debate itself was something of a wash.

It is also not clear whether Colin Powell’s endorsement has had any effect. Obama gained ground in four of the seven national trackers today, lost ground in two, and the last one was a push (this does not include the brand new ABC/WaPo tracker, which debuted today).

The central point is this: if McCain has gained ground — and most likely he has — then what he’s done is reset the race to roughly where it was two weeks ago, when Obama also had roughly a 6-point national lead. Except, the two positions aren’t entirely equal, since two weeks have run off McCain’s clock. Roughly speaking — and accounting for his inferior position in the electoral college — McCain needs to gain about half a point per day every day between now and November 4 to become a favorite in the electoral college. That is not an easy task; from the nadir of Obama’s numbers, which we put at 9/12, to his peak, which we put at 10/11, Obama was gaining about a quarter of a point per day on average. That is, by the standards of a presidential campaign, very rapid movement. But McCain needs to get those numbers down about twice as quickly as Obama got them up, and he does not have any debates or other major public events to assist him.

McCain also has significant problems with his electoral map, particularly in Virginia and Colorado, which continue to project about a point or so ahead of Obama’s national numbers. While McCain appears to have stopped the bleeding in Florida and perhaps Ohio, that is not the case in Missouri, Nevada, and North Carolina, which have drifted closer to the national averages.

If McCain were to make a kamikaze play for Pennsylvania — as John King seems to imply — while conceding Colorado, Iowa and New Mexico, this wouldn’t seem to make his task much easier. The Kerry states less PA, but plus CO, IA, and NM equal 252 electoral votes, leaving Obama just 18 votes short. Obama could pick up those votes in one fell swoop by winning Florida or Ohio — or, more plausibly, by winning Virginia plus any one of North Carolina, Missouri, Indiana or Nevada.

It is unlikely that McCain can accomplish this all of this organically, by winning garden-variety news cycles or even by claiming the lion’s share of undecideds. Rather, he likely needs some kind of unknown, external contingency to place himself back in the thick of the race.