John McCain has once again improved his position in the national tracking polls, having gained ground in 4 of the 5 6 trackers that published today (Rasmussen and IBD/TIPP were the exceptions).** Our model now perceives that Obama has come somewhat off his peak numbers, which were realized perhaps 5-7 days ago.

At the same time, McCain’s improved position in the trackers is a little bit difficult to reconcile with certain other pieces of evidence. In the Research 2000 tracking poll, for instance, while McCain has gained 5 points worth of ground in 48 hours in the topline numbers, the candidates’ approval ratings over that period are completely unmoved. In the Gallup tracker, while McCain has gained ground among likely voters since the debate, he has lost ground among registered voters. Lastly, every poll conducted on the debate itself suggested that Obama won the event.

What I think we may be seeing are some improvements in Republican enthusiasm. Prior to the debate, McCain was having a very rough go of things in the media, as the only stories seemed to be the ineffectiveness of his attacks on Bill Ayers, and the nonresponsiveness of his campaign to the economy. In the polls that measured these things, there was evidence that enthusaism was very low among McCain supporters. A conservative voter, having little real message to latch on to, and seeing McCain far behind in the polls, might have been telling pollsters that he wasn’t sure if he was going to bother to vote, and therefore might have been screened out by likely voter models, which all of the tracking polls are now using.

Between “Joe the Plumber”, “spread the wealth”, “I’m not George Bush”, etc., however, McCain at least now seems to have a few somewhat more constructive talking points (in that sense, the fact that the Ayers attacks went over like a lead balloon at the debate might have done him a favor). So some of those crestfallen conservatives might have moved back into the likely voter universe.

What I don’t know that McCain is doing, on the other hand, is actually persuading very many voters, and particularly not independents or registered Democrats. If that is the case, than McCain is likely to run into something of a wall very soon here, brought about the Republicans’ substantial disadvantage in partisan identification. People sometimes misunderstand the nature of “momentum” in presidential campaigns. If McCain was down 8 points yesterday, and is down 6 points today, that does not mean that he is likely to be 4 points down tomorrow. On the contrary, polling in the general election seems essentially to be a random walk, with the minor stipulation that the polling has had some tendency to tighten slightly during the stretch run (as our model accounts for). That is, the polls are essentially as likely to move back toward Obama tomorrow as they are to continue to move toward McCain.

McCain’s other problem is that the polls in battleground states have not really tightened at all. Obama gets good numbers today, for instance, in North Carolina, Wisconsin, and Florida. Obama presently has something like a 3:1 advantage in advertising, and most of that advertising is concentrated in battleground states. As such, this may serve as a hedge against any improvements that McCain is able to make elsewhere in the country. 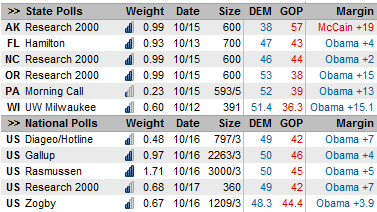 ** EDIT: I had originally missed the IBD/TIPP poll, which apparently does publish on weekends, and shows Obama gaining ground. It is not accounted for in today’s simulation run.