Perhaps the CBS poll that shows Barack Obama with a 14-point lead among likely voters (12 points when third-party candidates are included) is a modest outlier. But if so, John McCain has more and more outliers that he has to explain away these days. There are now no fewer than seven current national polls that show Obama with a double-digit advantage: Newsweek (+11), ABC/Post (+10), Democracy Corps (+10), Research 2000 (+10), Battleground (+13), Gallup (+10 using their Likely Voter II model) and now this CBS News poll.

These are balanced by other results that show the race a hair tighter. Our model now projects that, were an election held today, Obama would win by 8.1 points. It also expects that the race is more likely than not to tighten some.

Nevertheless, we are a full month beyond the Lehman Brothers collapse in mid-September. Obama has enjoyed quite a remarkable run, turning a 2-point deficit into an 8-point advantage. What’s especially remarkable about it is that Obama’s lead has continued to increase with an eerily consistency. The collapse itself precipitated an almost immediate 3 or 4 point gain in Obama’s poll numbers, moving him from a point or so down to a point or so ahead. But since then, Obama has won news cycle after news cycle, adding another two points or so to his national lead every week.

McCain now has to go on a run of his own, a large enough run to wipe at least 8 points off of Obama’s lead, and perhaps more like 9 or 10 to cover his inferior position in the Electoral College and the votes that Obama is banking in early and absentee balloting. It is imperative that McCain does not just draw tomorrow night’s debate, does not just win a victory on points, but emerges with a resounding victory, the sort that leaves the spin room gasping for air. Failing that, we are getting into dead girl, live boy territory.

Let’s look at the polls: 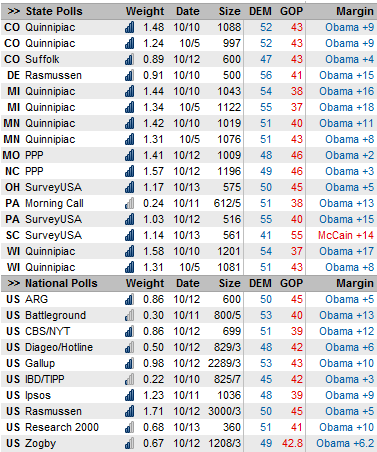 The state polls don’t present a much brighter picture for McCain. In particular, the Quinnipiac set of polling, showing large leads for Obama in Colorado, Michigan, Minnesota and Wisconsin, is bad news for him. Note that Quinnipiac conducted two separate sets of polling both before and after last week’s debate, with the debate only seeming to consolidate Obama’s advantage.

Pennsylvania, meanwhile, where SurveyUSA has Obama sustaining a 15-point lead, may be joining Michigan as a state which is completely out of reach to McCain. Ohio is still within reach — and the fact that it’s lagging a couple of points behind Obama’s national numbers is reason for McCain not to give the state especial concern — but clearly now seems to lean toward Obama. The Suffolk result in Colorado is a little better for McCain than the Quinnipiac numbers, at least, and PPP has Obama moving slightly off his peak in North Carolina, although that may only be because McCain has finally started to invest resources there that he’d rather be spending everywhere else. The Tarheel State, in other words, has served its purpose for Obama, whether or not he ultimately wins it.