It’s hard to tell these days whether the McCain campaign is coming or going; they have thus far defied our prediction that they would revert to a kinder, gentler tone. But the polls continue to break in pretty much just one direction, and it isn’t in Senator McCain’s. 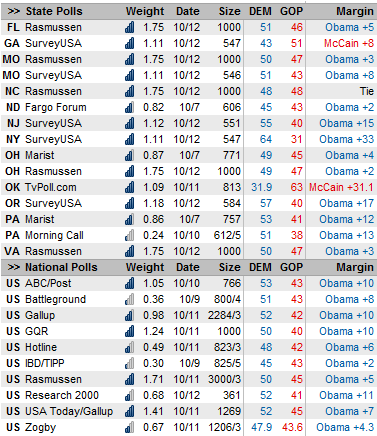 Both Rasmussen and SurveyUSA released a ton of polling today, and it is almost uniformly favorable for Barack Obama. All you really need to know about the Rasmussen polling is that the five state they now define as battlegrounds — Ohio, Florida, Missouri, North Carolina, and Virginia — went to George Bush by an average of 7 points in 2004. Today, Rasmussen has Obama ahead in four of the five (including his first lead ever in a Rasmussen poll of Ohio), and tied in the other (North Carolina).

SurveyUSA, meanwhile, shows Obama making big gains in Missouri, and (less interestingly) in Oregon, New Jersey and New York. Overall, our model looks at the polls that were in the field yesterday — these include all of the Rasmussen and SurveyUSA polls that we just mentioned — and thinks it was his second-strongest individual polling day of the year, trailing only one day in early February.

Obama even holds the lead in a Fargo Forum poll of North Dakota, a state which his campaign abandoned some weeks ago. Our model is not yet ready to call North Dakota a toss-up — we have no context to evaluate the Forum‘s poll, since this is the first survey they have released all year, and September polling had shown a double-digit lead for McCain in the state. Still, along with West Virginia, Montana, and the 2nd Congessional District in Nebraska, the Peace Garden State represents another place that Obama could win on a very good Election Night. Winning all of those plus all of the more traditional battleground states would total 387 electoral votes, which would better Bill Clinton’s figure of 379 in 1996.

The tracking polls, at least, did move on balance toward McCain today. However, they remain strong for Obama, and there is no reason to give special reverence to them. The one-off national polls deserve consideration too, and both ABC/Post and GQR/Democracy Corps give Obama a 10-point lead, as of course do the state polls. Our model considers the trackers along with everything else, and does not yet perceive any cessation in Obama’s momentum.

There is a little bit of tracking poll housekeeping, however. Gallup is now listing likely voter results in addition to registered voter results. Our policy since the first debate has been to use the likely voter model when we have the choice, and so that’s what we will do from here forward. However, Gallup provides two separate likely voter models: “Likely Voters I”, which favors Obama by 7 points, is based on “current voting intentions and past voting behavior”; “Likely Voters II”, which goes to Obama by 10, is based on “current voting intentions” only.

I understand that Gallup wants to cover its butt; this is a difficult election to evaluate. With that said, I’d wish they’d tell me which of their likely voter models they think is superior and stick with it.

If they’re going to ask me to make a choice, then I’m going to go ahead and make one, and that is with the “Likely Voters II” model, as “Likely Voters I” would seem to entirely strip out the registration gains that Obama and the Democrats have made over the past four years. In addition, the fact that there is a massive Democratic advantage in enthusiasm makes me skeptical of any likely voter model that cuts 3 points out of the Democratic margin. Because of the way that our model handles national polls, neither decision actually advantages Obama or McCain any, but I do think that “Likely Voters II” is liable to be a more accurate reflection of the electorate.