The political industry’s day of rest is Saturday, not Sunday, when the morning talk shows can make news, and campaigns try and jockey to lead the news cycle in the week ahead. As such, it tends to be the slowest day of the week for polling, and today is no exception: 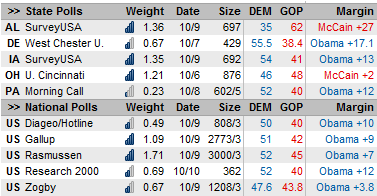 There are really only two items of any significance here. Firstly, Obama continues to hold or slightly improve his position in the national tracking polls. But secondly, McCain got a strong result in Ohio, where the University of Cincinnati’s poll for an Ohio newspaper consortium has John McCain 2 points ahead in the Buckeye State. Bonus for McCain: UC’s polls have a strong track record. Mitigating factors: about three-fifths of the interviews in the poll were conducted before the debate, which seems to have boosted Obama’s standing slightly, and he has improved his position modestly from the couple of polls that UC conducted in September, which had McCain ahead by 4 and 6 points respectively.

Overall, these results appear to roughly cancel out, and Obama’s chance of winning the electoral college is 90.9 percent, the same as it was yesterday.