With 25 days to go until the election, Barack Obama is presently at his all-time highs in four of the six national tracking polls (Research 2000, Battleground, Hotline and Zogby) and is just one point off his high in Gallup. He has emerged with clear leads in both Florida and Ohio, where there are several polls out today. He is blowing McCain out in most polls of Pennsylvania and Michigan, and is making states like West Virgina and Georgia competitive. 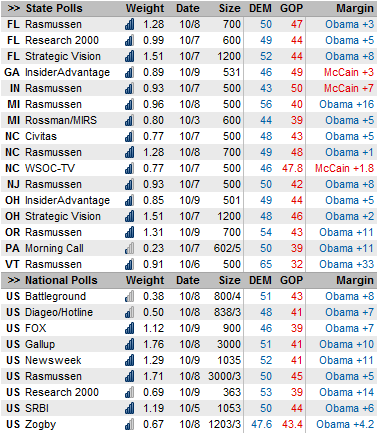 There’s just nothing in there for McCain to hang his hat on. Even a pollster like Strategic Vision, which has generally had a Republican lean this cycle, now has Florida and Ohio going against them (Florida in a big way). Well, OK, maybe they’ll hold on to Indiana, although both campaigns’ internals likely have the state closer than Rasmussen does.

McCain is getting some criticism for campaigning in Iowa, and for sending Sarah Palin out to West Virginia, but the truth is that their electoral hand is so poor right now that it doesn’t much matter in which states they’re deciding to bide their time. Remember, any world in which McCain has a chance to win on Election Day is a world that looks very different from this one — some significant event will have to have occurred to fundamentally change the momentum of the race. We don’t know which states might be affected disproportionately by such an event, and so a lot of states are conceivably worth attacking or defending, any of which could potentially become more important in the face of unknown unknowns.