Gonna try and make it to the Cubs game tonight, which means that I’ve got a ton of work to do this afternoon, which means that … you’re getting a rare AM edition of Today’s Polls. And it’s a good one for Barack Obama: 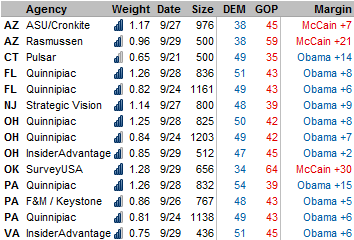 What’s up with those Quinnipiac polls? Why have I listed them twice?

Well, Quinnipiac broke its sample into two halves: pre-debate and post-debate. For all intents and purposes, these are two separate surveys, and so that’s how I list them. Obama gained ground in the post-debate versions in all three states (OH, PA, and FL).

More importantly, however, the polls represent significant gains for Obama since the last time Quinnipiac had been in the field in early September, particularly in Florida, where he had been 7 points behind before.

The McCain camp is going a little crazy over these polls. Usually, when a campaign does something like that, it’s worried about morale. But do their complaints have any basis in fact?

Quinnipiac’s polls have shown a slight Democratic lean this cycle — they’ve been 1-2 points more favorable to Dems than contemporaneous polls of their states. From what I can tell, their head of polling (Peter Brown) has fairly conservative politics, so I don’t know that it can be called a partisan lean. But that is the side that the polls have tended to end up upon nevertheless.

At the same time, they are highly-rated polls, use large sample sizes, and have plenty of rich trendlines for comparison. Is it possible that they are outliers to a certain degree? Possibly — maybe even probably — but as I intimated yesterday, with Obama’s surge nationally it was inevitable that we were eventually going to get an oh sh*t set of state polling for Obama. There clearly seems to have been some movement toward Obama in Florida, as well as in Pennsylvania, where the Morning Call tracker has had him gaining a point literally every day since its inception. Ohio, I am somewhat less convinced about, but InsiderAdvantage also gives him the lead there (as well as a 6-point lead in Virginia).

The most critical point may be that the McCain campaign now faces something of a Hobson’s choice. In terms of states where they had hoped to play offense, Michigan began to break away from them a week or so ago, and now Pennsylvania — which had initially reacted well to Sarah Palin — seems to be doing the same. But if all they’re doing is playing defense, that gives Obama so many scratch-off tickets — Colorado, Florida, Ohio, Virginia, North Carolina, and perhaps Indiana, Nevada, and Missouri — that it’s essentially inevitable that he’ll get lucky in one or more of those states, several of which he already appears to have the lead in.

My gut instinct if I were the McCain campaign is that it might be time to pick one of Pennsylvania and Michigan — whichever state my internals liked better — and consolidate my offense there. McCain certainly can’t be spending time in Iowa, where he spent much of yesterday, but where he has never led a single public poll against Obama.