There was 1:49 on the clock, and the Washington Capitals and the Anaheim Ducks were tied, with two goals apiece. Both could have used the two points a win would bring: The Capitals were in a tight battle with the New York Rangers, the New York Islanders and the Pittsburgh Penguins for control of the Metropolitan division, and the Ducks could further extend their Pacific division lead.

But rather than try to score the game-winner, neither team took a shot on goal in the final 1:49, content to let the Feb. 6 game go to overtime, when both teams would be guaranteed at least one point.1

Francois Beauchemin, a Ducks defender who was on the ice for much of the final 1:49, admitted that going to OT — where the winner gets two points and the loser one — is the primary goal late in tie games. “We won’t take as many offensive chances as we would if we were down one goal or tied at the end of the second period,” he said. “We talk about it [with the coaches].”

Todd Reirden, a retired defender who played for four NHL teams and now oversees the blueliners as a Caps assistant coach, agreed. ” ‘Sit back, play defense, make sure we get a point’ would never be words that I use, but certainly, you get that far into a game and as a coach you want to leave with something,” he said. “With the parity in the league right now, the importance of getting points on a nightly basis has become more of a focus of not just our team, but other teams as well.”

Since 2010, the Caps have played 125 games that were tied at the end of regulation, including a remarkable 28 during the 2013-14 season. That number puts them, fittingly, in a tie with the Islanders, atop the league. Those two teams are not alone in their quest for extra hockey, however; 25 percent of games this season (through Tuesday) have reached overtime. If that number stands, it will be the highest yearly percentage of overtime games in the league’s history.

At the end of tie games, teams across the league don’t play to win — they play not to lose.

It wasn’t always this way. For most of the NHL’s history and through the 1998-99 season, a team earned two points for a win in regulation or overtime, zero points for a loss, and one point for a tie. But in 2005, the NHL mandated shootouts at the end of overtime, which prompted a change in the point structure. Now, the winner would get two points and the overtime loser one. (From 1999 to 2005, the loser of an overtime game also received a point, but matches could also finish tied, with each squad earning a point.) By and large, the new structure encourages teams in tie games to try to play for overtime, where the total number of points awarded to the teams increases by 50 percent (three vs. two).

In today’s NHL, overtime frequently benefits both teams, which is why teams that are tied often holster their sticks. Take a look at this chart, which shows the expected goal (EG) rate per minute2 over the course of an NHL contest. EGs use shot distance and location from the NHL’s play-by-play data to estimate the number of goals that we expect the two teams to combine for during each minute of play. There’s something different about that third period. 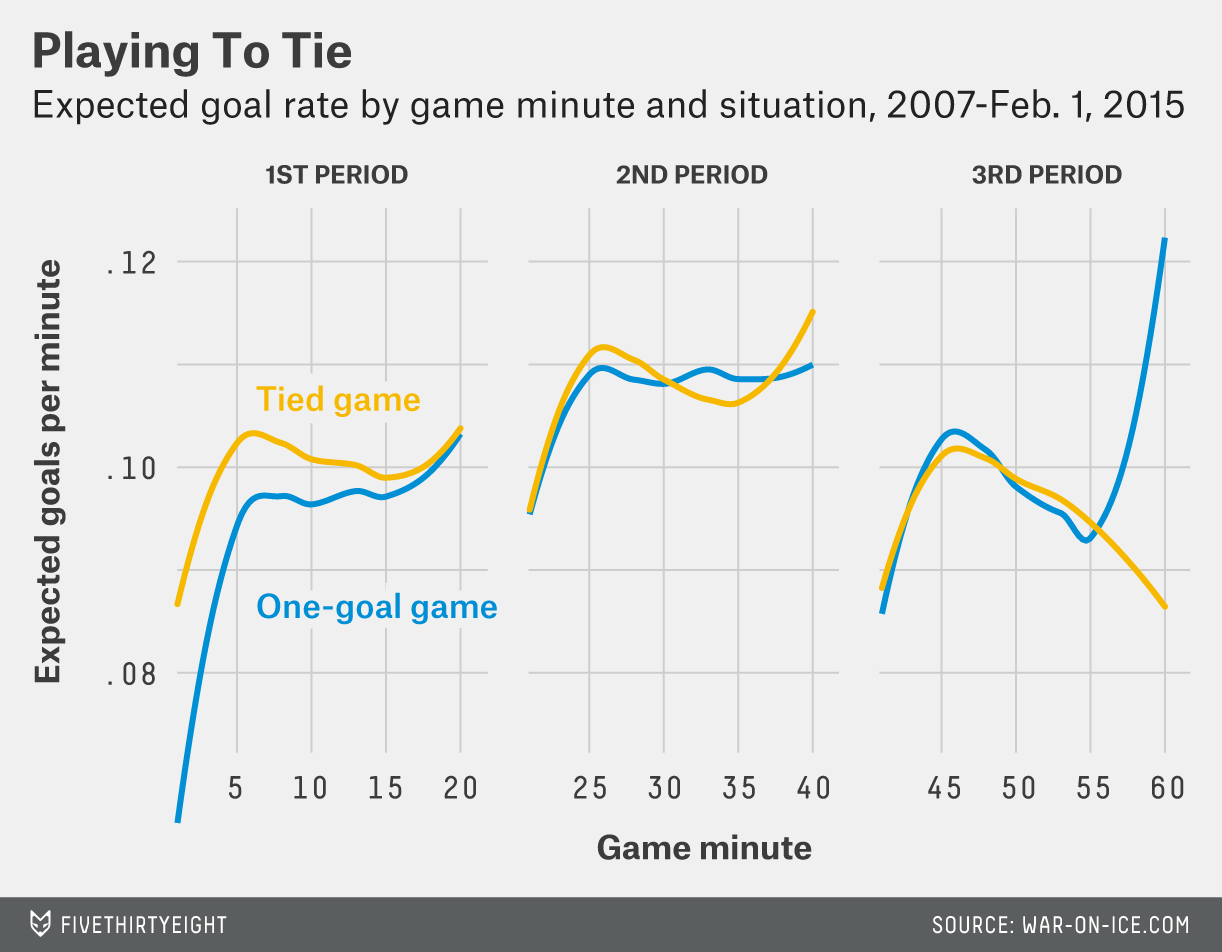 The expected goal output is nearly identical between tied games and one-goal games from the 15th through 55th minutes of the game. But for the last five minutes, the number of EGs rises for one-goal games and drops for tied games.3

At the end of a tie game, benches shorten, and coaches change their behavior. Reirden, for example, says he is loath to send out a defenseman who might take an unnecessary risk, preferring a guy he knows will stay home and limit the opposition’s attacking chances, even if that means sacrificing a shot at getting a goal.

It’s tempting to say, meh, more overtime equals more fun. Fans love it — it’s free hockey after all. And four-on-four, sudden-death free hockey at that. Perhaps relatedly, league revenue has skyrocketed since the 2004 lockout, reportedly reaching an all-time high of $3.7 billion in 2014.

But more overtime leads to a radically different game. For starters, the number of overtime games increases as the season advances; the postseason chase makes teams desperate to take advantage of the extra point available.

Take a look at this chart, which shows the overtime rates in the league’s old and new point systems by the day of the season in which the game was played.4 (The shaded regions represent 95 percent confidence intervals for the smoothed lines.) 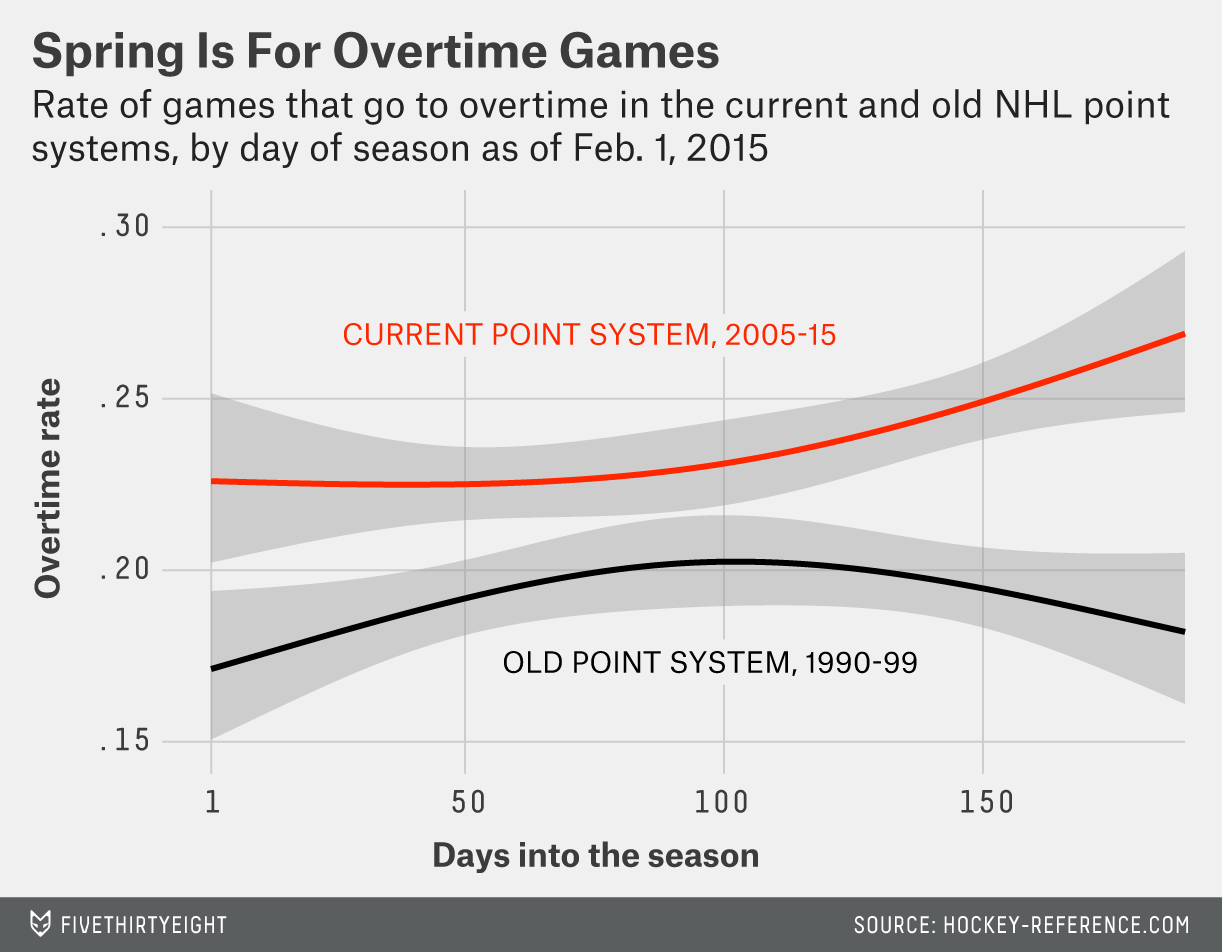 While overtime rates have been consistently higher in the current point system, the late-season change is dramatic. Roughly two-thirds of the way through the season, OT rates spike; in the old system, without the loser point, rates plummeted late in the season. Spring is now the NHL’s overtime season.

The other way the game changes: Nonconference games become a lot more passive for both teams. The flip side of that is that teams try to win more often against in-conference teams.

If you corner people who work in the NHL, they’ll admit that teams cater their behavior and offensive aggressiveness based on a variety of seemingly unintended incentives. “There is a lot more strategy at the end of the games than I remember,” Reirden said.5 The game is changing — but is it for the better? The NHL considered the merits of alternative point systems as far back as when it instituted the new one. But nothing has come of it. Much like players in a tie game late in the third period, the league seems uninterested in altering the status quo.