Since the shooting Sunday at Orlando LGBT nightclub Pulse, American LGBT activists have pointed out that many members of the community targeted by the shooter are still not allowed to donate blood that could help save victims.

The ban has a long history. In 1983, after scientists understood how HIV was spreading but had no test to find it, the Food and Drug Administration instituted a deferment on blood donations from men who had had sex with men since 1977. That eventually became a lifetime ban. The rule was only scaled back last December, when the FDA issued a revision. Now, men who have sex with men can donate blood — but only if they haven’t had sexual contact with another man for a year before the donation. That, along with the other questions donors must answer, depends on people being honest, which has its faults. But the FDA has said that even with its shortcomings, the ban is important because men who have sex with men are the demographic with the highest prevalence of HIV in the U.S.

It would be easy to assume that the lifetime ban has been successful at keeping HIV out of the blood supply. Today, the National Institutes of Health say the risk of a recipient contracting HIV through a transfusion of tainted blood is 1 in 2 million. And even that assessment overstates the risk because it is based on statistical calculations. The actual risk, as measured by incidence, is much, much lower. More than 15 million pints of donated blood are transfused into Americans each year. The last time anyone is known to have contracted HIV from blood donation was in 2008.

But this success — which has been duplicated in Canada — has little to do with donor bans and almost everything to do with blood screening, experts told me. Since 1985, every drop of donated blood has been tested for HIV. As the testing technology has improved, the incidence of transfusion-acquired HIV has plummeted, a fact that bolsters the argument of critics, who say it’s time to end a ban on blood donation that isn’t backed by the evidence. 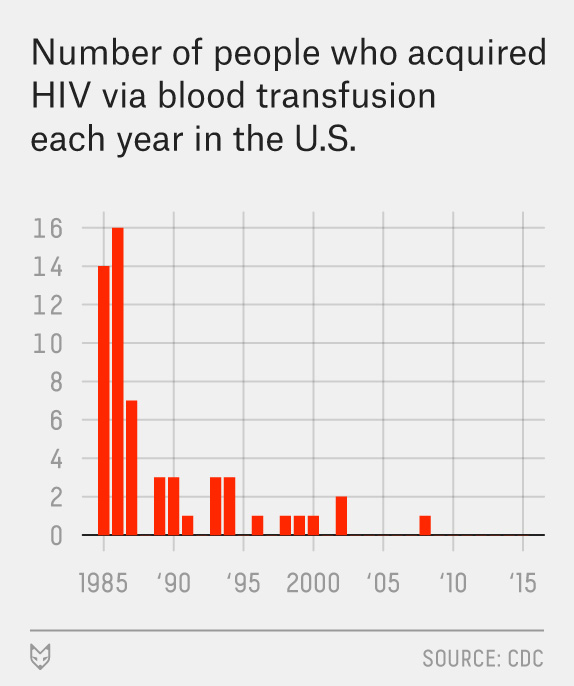 Americans donate blood through a patchwork of independent organizations, but all that blood is subjected to the same federally regulated screening process. Donated blood is put into storage while samples are taken and tested for a variety of diseases. There are two different tests used for HIV, and both are highly accurate. The false-positive rate for this system is .01 percent, said Brian Custer, associate director of the Blood Systems Research Institute, and Sheila O’Brien, associate director of Canadian Blood Services. False negatives are even less frequent than that. The primary risk for HIV-positive blood entering the donor system is the lag between when a person becomes infected and when the infection is detectable — what scientists call the “window period.” It’s currently nine days. In the United States, there are a couple hundred cases each year where infected blood is discovered during testing. In those situations, donors are identified, made aware of their diagnoses, and restricted from donating again.

This year, researchers from the FDA published a paper suggesting there would be risks involved with relying solely on this system to prevent transmission. Using statistical modeling, they predicted that eliminating donor bans on men who have sex with men would result in an additional 31 units of HIV-infected blood slipping past the screening annually, potentially exposing as many as 54 people — which could be a compelling argument for maintaining the ban. But this is based on the assumption that donors would not practice any self-selection. And people who donate blood represent a civic-minded subset of the population that might be less likely to donate if they think they have done something risky, O’Brien told me.

Public health experts don’t know much about the prevalence of high-risk behaviors within that group. Or, rather, what they know is hampered by sampling bias. For instance, a 2012 study found that 46 percent of young men who have sex with men were having unprotected anal sex. But that study was done using subjects recruited from GRINDR, a gay hookup app. This sort of problem is the norm in studies of these men’s sexual behavior, mainly because it’s difficult to recruit large populations of men who have sex with men outside the context of an event, location or app that might be biasing the sample toward high-risk people. “On average, higher risk seems to be associated with that group. It’s not a causative risk factor. It’s associated,” O’Brien said. “Most studies that focus on [men who have sex with men] focus on high-risk MSM, people who have risk factors that would preclude them from donating anyway.”

But we can learn something about risky donors by looking at the people whose donated blood has tested positive for HIV. In the 2008 case where a recipient was infected by donor blood, the donor was a man from Missouri in his 40s who was married to a woman but had anonymous sex with men and women — frequently while intoxicated.

Scientists don’t know how many of the HIV-positive donors identified through screening are men who have sex with men. There is no way to gather this information because blood donations are collected through a number of organizations.

Custer is part of a team working on a program to collect detailed information about every donor whose blood tests positive for HIV. In a pilot, conducted from 2010 to 2013, Custer’s team found that 76 percent of HIV-positive donors were male. They tended to be either white or black and to not have completed education after high school. And 52.4 percent of those men had had sex with another man in the past 12 months. An additional 9.3 percent had had sex with men at some point in their lives.

The forms people must complete before donating blood include questions about whether they’ve had sex with a sex worker, whether they’ve used injected drugs, and other details of their lives — in addition to asking whether they are a man who has had sex with men. All those things can preclude a person from being allowed to donate.

But “right now we don’t exclude and don’t ask any questions around heterosexual partnerships,” Custer said. “They could have a very large number of partners, and we don’t ask. It’s a fair criticism.” A possible solution to the debate over donor bans would be to make the bans dependent on sexual risk factors that apply to everyone, Custer and O’Brien said.

But they also said that solution would likely meet with resistance, primarily because it could drastically reduce the donor pool. Some donors will resent having to answer questions about their sex lives, Custer said. Last year, Canadian Blood Services did a survey of potential donors that included questions about the number of sex partners they’d had in the past year. “We found we would exclude a lot of them and would have trouble having enough blood,” she said.

O’Brien also pointed out that any decisions made about changing donor bans were based on more than just evidence. In 2013, Canada reduced its ban on men who have sex with men from lifetime to five years since last sexual contact with a man. In the process, the country included consultations with stakeholders, including the LGBT community and people who received blood donations. “At the end of the day, we went with the five-year deferral because the recipients were more comfortable with that,” she said.

Meanwhile, the FDA has approved a new technology that would make the blood supply even safer. In December, the agency gave a green light to the Intercept Blood System, which can damage and disable any HIV virus in blood samples, rendering it incapable of infecting a recipient. But the FDA’s 2016 paper suggests that it probably won’t change its position on men who have sex with men any time soon.