As I’ve hinted a couple of times, we now have a new version of the model running, which attempts to account for the interrelationships between polling movement in different states. Before I can work up the energy to fully describe that, let me first tell you about the new Tipping-Point States metric that I’ve developed to accompany it.

A Tipping-Point state is now defined as a states that would be most likely to alter the outcome of a close election if it were decided differently. More specifically, a Tipping-Point State is among the closest states –- taken alone or in combination –- that would give the losing candidate at least 270 electoral votes if transferred to him from the winner’s column, with no wasted electoral votes.

Let me give you a couple of examples. First, 2004, which is an easy one. The closest states won by Bush were New Mexico and Iowa. However, these would not have given John Kerry enough electoral votes even if he had won them. So the third-closest state, Ohio, was the lone Tipping-Point State for that election, since it would have gotten Kerry to 270 all on its own.

Now a somewhat more complicated example: 1960. Richard Nixon was 51 electoral votes shy of winning that election. The closest Kennedy states were as follows:

So, we start with a 51-EV gap and begin whittling those numbers down for Nixon. Giving him Hawaii makes it 48, Illinois makes it 21, Missouri cuts Kennedy’s lead to 8, and New Mexico to 4. And then we hit New Jersey, which gives Nixon the election. But it also gives him 12 extra electoral votes.

So we go back through the list in reverse order and see if there is any wastage. In this case, there is. If we place New Mexico back in the Kennedy column, Nixon still has 8 electoral votes to spare. In fact, while we must keep Missouri and Illinois, we can also eliminate Hawaii. So the Tipping-Point states for Nixon in 1960 were Illinois, Missouri, and New Jersey. This was the most efficient possible combination of states that would give him a winning electoral margin.

But I tried to slip one by you there. What do I mean by a “close election”? I mean one in which the electoral math matters. That was the purpose of the graph that I posted this morning: 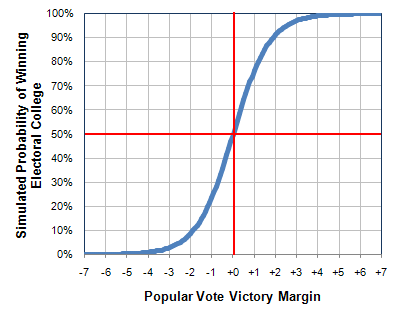 So this definition is rather complicated mathematically — but at the same time, I think it’s more intuitive than the previous version. It’s definitely a lot more robust.

The hot-off-the-presses Tipping Point numbers are as follows: 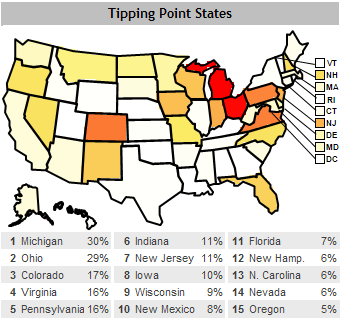 Michigan and Ohio will each prove to be decisive in a close election about 30 percent of the time. After that are Colorado and Virginia, which serve as gateways to their respective regions.

The really interesting thing is to compare the Tipping Point states with and without the intrastate (or should that be interstate?) correlations. A state like North Carolina is punished, for instance, for reasons that most of you can probably figure out. But we’ll save that for later.