The big (long-expected) news from East Asia from this weekend was the landslide victory of Japan’s opposition party, the Democratic Party of Japan (DPJ). Ousting the long-ruling Liberal Democratic Party (LDP), who have dominated the country since the end of US occupation in 1952, the DPJ and its coalition partners now control 318 of the 480 seats of the Diet’s lower house. The DPJ has controlled the upper chamber since 2007.

Looking back to the election last time that the LDP lost power – – a brief stint from summer 1993 to spring 1994 — we can see a rapidly changing landscape in Japanese politics.

The 1990 election reaffirmed the dominance of the LDP, though with a caucus that emerged 30 members lighter than in 1986.

Looking at the 1990 results, we can see a curious trend. While the LDP won significantly less than a majority of the national vote, nearly four points shy, they walked away with almost 54 % of the seats in the House of Representatives. The next two largest parties, the Socialists and the Clean Government Party, also profited beyond their share of the national vote, while the smaller parties and independent candidates lost ground.

Moving on to the 1993 balloting, however, things got worse for the LDP. 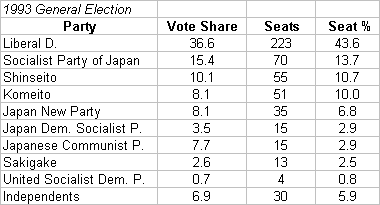 Following this election, the 8 minority parties pulled together a short-lived coalition government, led by Morihiro Hosokawa of the Japan New Party, which then merged with the Shinseito party’s members and other left-leaning groups to form the current Democratic Party of Japan.

The main outcome of the Hosokawa government was the installation of Japan’s current mixed electoral system, where both single-member district seats and overall proportional representative seats exist within the Parliament. Japan is broken up into 300 districts and 11 electoral blocs, where previously all members of the House of Representative were elected from (multi-member) districts . Voters cast a ballot for a specific candidate for their district, as well as for a party for their electoral bloc, which together contribute the remaining 180 members of the House of Reps. As a result, a strong national showing only guarantees you a portion of the 180 proportional “electoral bloc” votes – meaning that winning individual seats is key. The LDP has dominated the single-member districts for generations, in part because of the normal power of incumbency, which seems to particularly robust in this case.

Looking a bit deeper into the results, it turns out that the DPJ has performed well at the national level for some time, even winning a plurality of the proportionally distributed seats in 2003. 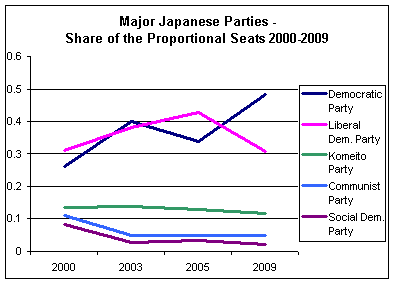 However, it was not until 2009 that the DPJ was able to pick off a significant number of LDP-held single-constituency seats and take the overall majority, while at the same time expanding their strength in the proportional “electoral blocs” 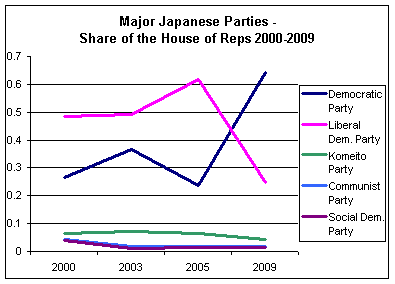 The new administration under presumptive Prime Minister Yukio Hatoyama has promised to parlay their resounding win into a number of reforms in Japan. Given the poor performance of the Japanese economy, and continued public dissatisfaction with the pace of foreign policy reform, there are many things for the new government to tackle. We will take a closer look at what this means for US-Japan relations and politics in a future article.

In the meantime, we can summarize the strategy of the DPJ/Hatoyama government with the following few points:

1. Domestic issues: While the election included elements of foreign policy, it is clear that Hatoyama is focused on reform at home, including traditional moderate left priorities of minimum wage, worker protections, and subsidized education costs.

2. Reform relations with US and region: Following fifty years of relatively stable expectations on both sides of the Pacific, Japan is ready for closer cooperation with regional partners like China, Korea, and south-east Asia. At the same time, Hatoyama promises to review the relationship, particularly regarding the military presence, of the US and allies.

3. Government efficacy: The DPJ has spoken widely of decentralization and transparency in government, something that they alleged the LDP was poorly deficient in.

Moving forward, we should expect to see a focus on more “democratic socialist” style policies in Japan, while maintaining relatively low taxes and OECD-type foreign policy goals. The key question for observers is whether this is the beginning of a path of reform and change in Japanese political culture, or if perhaps this election simply confirms a change that began in the mid-1990s and early 2000s and was not brought to fruition until this year.

Given the history of rewarding political stability and steady progress — we saw that the DPJ victory was portended by strong national showings beginning in 2000 and 2003 — it seems more likely to be the second. Rather than a flash in the pan, like the brief 1993 overthrow of the LDP, we are more likely to see another 5-10 years of slow but important political and societal adjustment and change in Japan, this time with the very conservative LDP on the sidelines.

Correction: The first version of this article did not well explain the change in electoral system that occurred in 1994, which has now been adjusted.
—
Renard Sexton is FiveThirtyEight’s international columnist and is based in Geneva, Switzerland. He can be contacted at sexton538@gmail.com