Not to be taken seriously.

What if the election were a three-way battle between John McCain, Barack Obama, and Hillary Clinton? 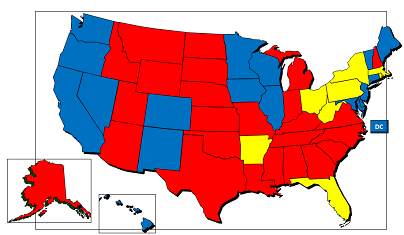 Under this scenario, Clinton wins 126 electoral votes in Arkansas, Florida, Massachusetts, New York, Ohio, Pennsylvania, Rhode Island, and West Virginia. Obama wins 182 electoral votes in California, Colorado, Delaware, Hawaii, Iowa, Illinois, Maryland, Maine, Minnesota, New Jersey, New Mexico, Nevada, Oregon, Vermont, Washington, Wisconsin and the District of Columbia. McCain wins the remaining 230 electoral votes. So that means that … Obama wins the election in the House of Representatives? I have no idea, and in practice the Democrats would probably lose states like Florida and Colorado where they do not have a strong party identification advantage.