OAKLAND, Calif. — If we someday look back and can firmly say that the Golden State Warriors were the greatest team ever assembled, Thursday night’s 113-91 laugher over the Cleveland Cavaliers in Game 1 of the NBA Finals may be the moment that idea began coming into focus for the average fan.

In the first half alone, Golden State missed a whopping 15 shots from inside the restricted area, which basically equates to point-blank range. Draymond Green, who logged 32 points, 15 rebounds and nine assists in a Game 7 loss last year, didn’t score a basket until there was just over a minute left in the third period. And Klay Thompson, arguably the second-best shooter in the world, finished the evening 3-of-16 from the floor. Just two Warriors finished the game as double-digit scorers.

Yet while Golden State looked primed to roll a gutter ball, Kevin Durant’s performance acted as the ultimate bumper rail, and the Warriors prevailed by 22 points instead.

The superstar finished with 38 points on 26 shots, and logged eight rebounds and eight assists without turning the ball over even once.1 Durant had six dunks by himself, a number that was jarring when juxtaposed against the fact that the Warriors finished with just four turnovers as a team, tied for the fewest in a game in NBA Finals history.2 Honestly, think about that: Durant had more dunks than his team had turnovers.

Durant was at times a playmaker, setting up his teammates.3 He was a lethal 1-on-1 scorer when he wanted to be, undressing Richard Jefferson with a nasty stepback that nearly incinerated the old-timer’s shoe. But perhaps most importantly, he pushed the tempo and created defensive conundrums for Cleveland that basically break basketball logic.

Twice during the second quarter, Durant dribbled the ball right down Main Street without a single Cavalier stepping up to challenge him.

And while it’s easy to blame that on horrendous defense — Cleveland was the worst transition D in the NBA during the regular season, and many of us thought the team might struggle to get stops in this series — it isn’t as simple as the Cavs being lazy or afraid of defending Durant. Instead, they were most concerned about leaving Stephen Curry wide open for a corner three.

On both of these plays, you’ll notice that the Cavs are moving to their right to make sure that Curry doesn’t get a clean look from that spot. In doing so, Durant waltzes in for the four easiest points he’ll ever score.

Cavs coach Tyronn Lue suggested during his post-game press conference that it was a mistake to give Durant the easy looks in transition, because it allowed him to find a rhythm from outside. And there appeared to be some truth to that. KD shot just 1-of-5 from outside the paint in the first half but stayed afloat by shooting 9-of-13 from inside the painted area. He then went on to shoot 4-of-5 from outside that area after halftime, including a transition dagger where defenders, again, left him alone because of how focused they were on Curry.

It’s a night-and-day difference from Harrison Barnes, whom the Cavs were happy to ignore toward the end of last year’s series. Now, Cleveland gets burned for the slightest mistakes, while Golden State’s secondary players can be less perfect than they’ve ever been. The addition of Durant changed that dynamic, and given that this is happening in the Finals, it’s scary for the rest of the NBA.

The Cavaliers offense revolves around LeBron James getting to the rack and creating problems elsewhere, but in Game 1, those problems seemed to have been solved. According to player tracking data from NBA.com, James drove to the basket 21 times in Game 1 — he did so just 9.5 times per game in the regular season, and 11.1 times per game in the postseason before Thursday. Things didn’t go well on those plays. 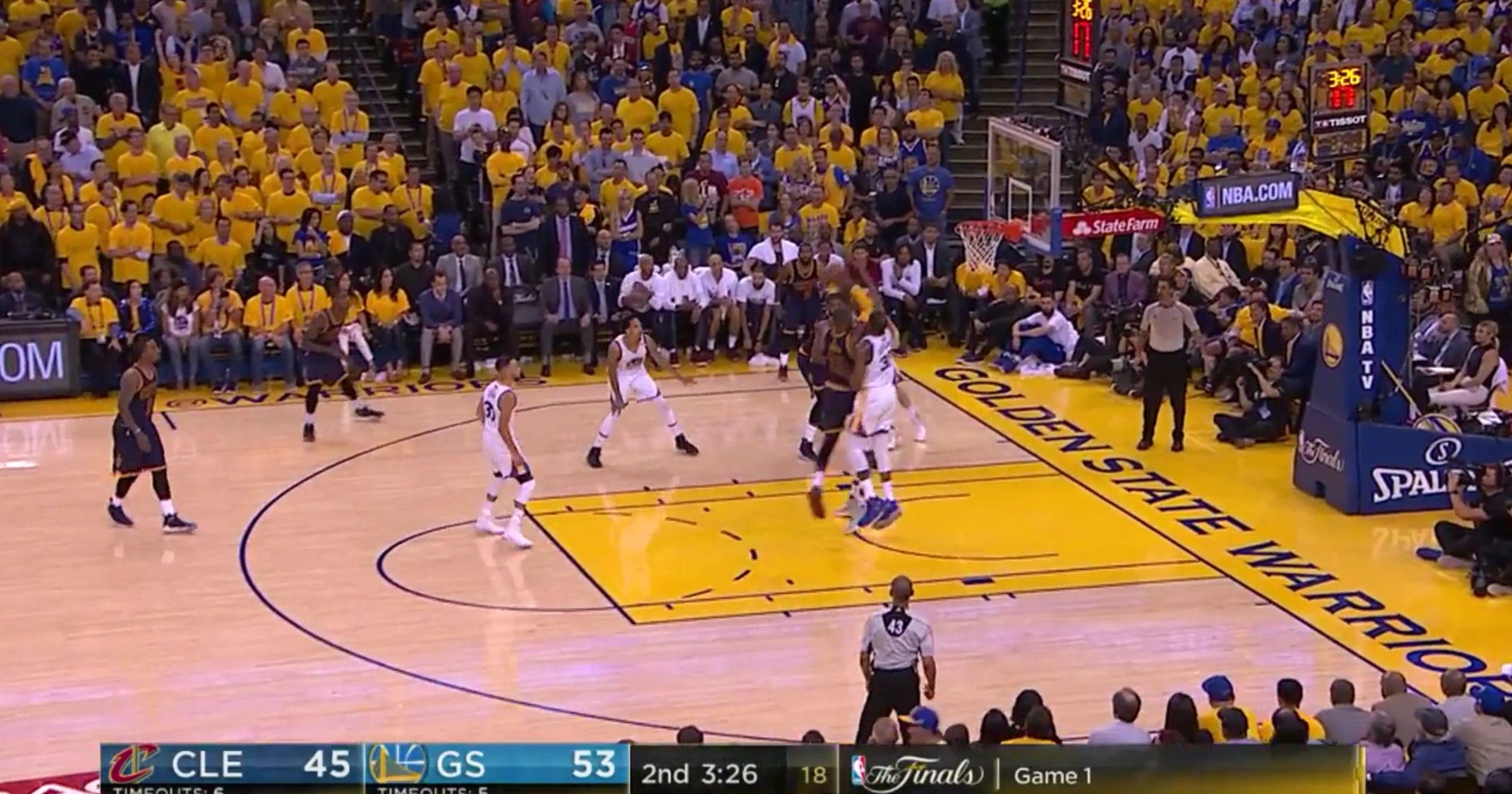 The Warriors’ ability to contain LeBron with just Durant and not compromise the rest of their defense threw the entire Cavaliers offense out of alignment. With the other Golden State defenders staying home on the Cleveland shooters, James had just one assist and compiled five of his eight turnovers on those plays. He went 2 for 8 on his drives — a significant drop off from the 62 percent he shot on his attempts off drives during the regular season.

The entire Cleveland offense is premised on James’s ability to score efficiently at the rim and draw help. But Durant has been one of the best rim protectors in the league this season, allowing opponents to shoot just 48.7 percent at the rim in the regular season and 41.8 percent in the playoffs. Whether or not James can solve that, single coverage at the rim will be a big factor in whether or not the Cleveland offense looks any better going forward in the series.

The Cavs were very, very bad — but they’re not dead

For a blowout to happen, it usually takes two teams playing at opposite ends of the spectrum. And as good as Golden State was at protecting the ball and scoring in transition, Cleveland’s offense was equally dreadful in just about every way.

Take shooting: The Cavs’ 34.9 percent accuracy from the field was their second-worst single-game mark of the entire season, trailing only this January loss to the Blazers. (Factoring in 3-point shooting using effective field goal percentage only makes things marginally better — this was their fifth-worst game according to that metric.) They made just 14 of the 38 shots (37 percent) classified as “open” or “wide open” by the NBA’s player-tracking data (including 7-for-24 from downtown) and were 3-for-28 (11 percent) on shots that weren’t created by either James’s or Kyrie Irving’s shooting or passing. Neither Tristan Thompson, Deron Williams nor Kyle Korver scored (they shot 0-for-10); J.R. Smith made Cleveland’s first basket of the game and wasn’t heard from after that.

Giveaways were also a major problem. Cleveland’s 17.1 percent turnover rate was tied for its seventh-highest of the entire season. The whole offensive package added up to a mere 91.4 points per 100 possessions, the Cavaliers’ fourth-least efficient game of the season — and by far the worst outing of the playoffs for a team that had gone into the Finals leading all teams in offensive rating.

The good news for the Cavs is that, as bad as they looked in Game 1, they’re far from doomed. Just one year ago, they were beaten by a wider average margin (24 points) in their first two games than they lost by Thursday (22) … and we all know how that series ended. With its explosive 3-point shooting, the Cavs’ offense could heat up and make us all forget about their bad night. But by the same token, Cleveland can scarcely afford any more duds against an opponent that might be the greatest the game has ever seen. Like their odds of winning the series, the Cavs’ margin for error just became more razor-thin than ever.

CORRECTION (June 2, 1 p.m.): An earlier version of this article incorrectly said that Kevin Durant allowed opponents to shoot 41.8 percent at the rim during the regular season. That was the number for the playoffs. His regular-season number was 48.7 percent. The story has been updated.

Kyle Wagner is a former senior editor at FiveThirtyEight. @kylenw