With two rounds of the NCAA men’s tournament in the books, it’s clear that there’s no overwhelming favorite to win the national title. No. 1 overall seed Virginia was gone less than 36 hours into the tourney,1 and defending champ North Carolina didn’t last a whole lot longer. Although most of the Cinderellas have cleared the dance floor (save for South region No. 11 seed Loyola-Chicago2), the next few weeks could belong to any of about a dozen teams.

Here’s what jumped out to us during the tournament’s first weekend-plus of action:

This is the Strange 16

Glance at the seed numbers of the teams left standing, and you’ll notice an odd mix. Only two No.1 seeds survived the tournament’s first weekend — the fewest since 2004 — and as many teams seeded seventh or worse (six) advanced as teams seeded in the top three of their regions. The resulting Sweet 16 isn’t necessarily stocked with scrappy opening-weekend flukes, as many of the first-round giant killers — such as UMBC, Buffalo and Marshall — didn’t make it past their second opponent. As a result, plenty of other years had more double-digit seeds reach the tourney’s second week. So this year’s Sweet 16 is just … well, strange. 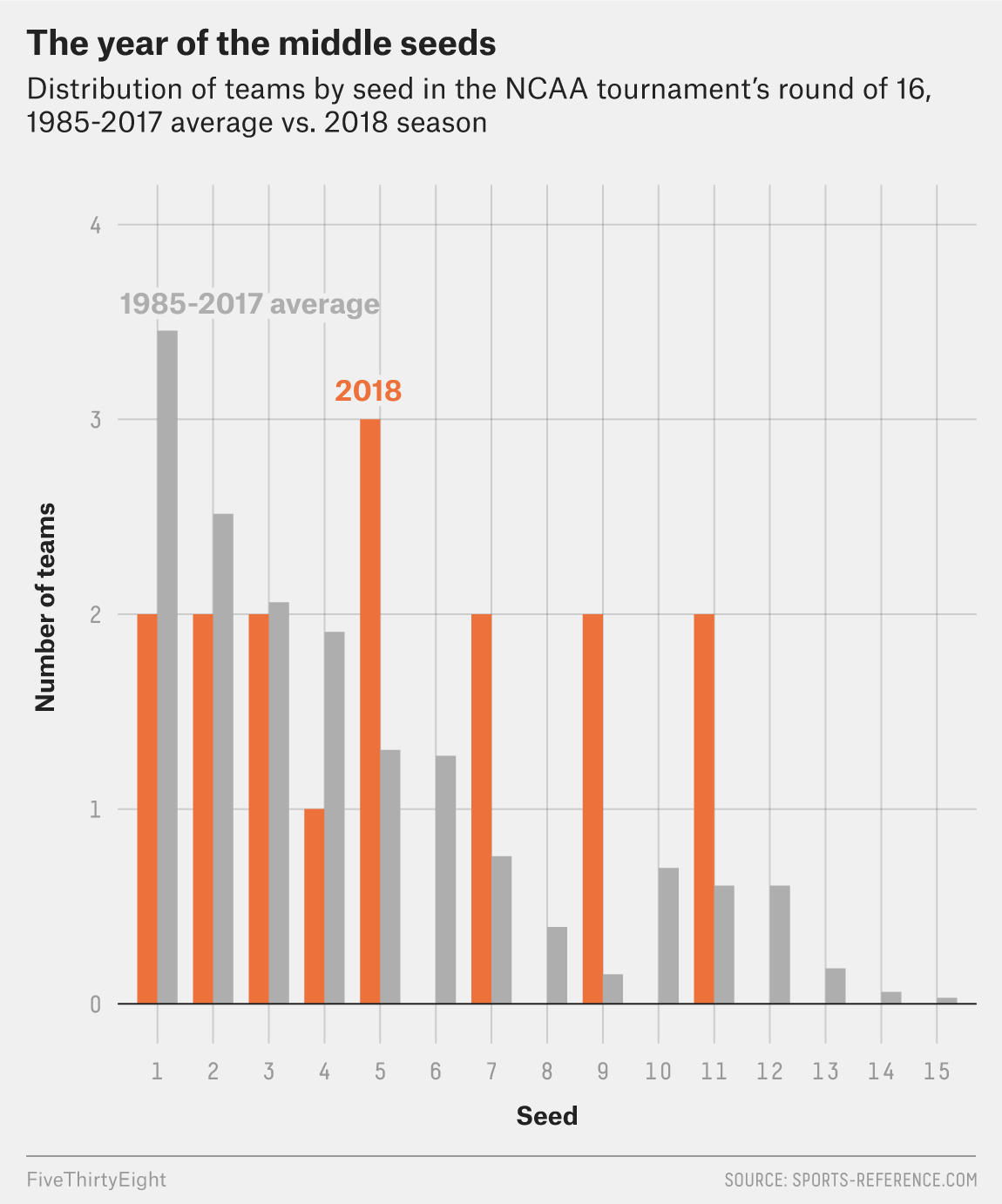 In fact, if we compute the squared difference between this year’s number of Sweet 16 teams at each seed and the historical average for every year since 1985, this is the most aberrant distribution of seeds in any modern tournament, surpassing even 2000 (when 12 of the 16 surviving teams were seeded between slots 4 and 10).

Perhaps more surprising than the barrage of upsets that highlighted opening weekend was the sheer magnitude of those unexpected wins. As No. 16 seed UMBC personified with its historic 20-point thrashing of No. 1 Virginia, these weren’t games in which the underdog squeaked by on a last-second shot; no, the favorites tended to be mercilessly crushed when they lost.

Including both the rounds of 64 and 32, games won by lower-seeded teams this year have come by an average of 10.6 points, only the third time in the 64-team era that the average upset at this stage of the tournament came by a margin of 10.5 points or more. The others were in 2000 (yes, that tournament again), when underdogs won their games by an average of 10.9 points per game, and 1997, when they won by 10.6 on average. But those years’ first two rounds saw only 12 and 13 total upsets, respectively, by teams with an average seed number of 8.9. This year’s tourney has featured 15 upsets, by teams with an average seed of 10.1, which makes this collection of underdog landslides even more impressive.

Before the tournament, we relegated Kentucky to “dark horse” status in the South region, if simply because its path to the Final Four was shaping up to be a daunting one: First, a tough Davidson team in the round of 64; then, most likely, Arizona, Virginia and Cincinnati, all in a row. For all of Kentucky’s talent, that seemed like a tall order.

Then, Arizona lost. And Virginia. And now, Cincinnati. (Not to mention Tennessee, Miami and Texas, too.) Suddenly, Kentucky finds itself as the sole team seeded better than seventh in its region, with a relatively clear road ahead. Our model currently gives UK the best Final Four odds of any team remaining in the field, at 57 percent.

According to the Basketball Power Index system developed by ESPN’s Stats and Information Group, Kentucky’s toughest game along its path to the Final Four will end up being its opening-round matchup against Davidson — which is an astounding testament to the ease of the Wildcats’ path if they do wind up winning the South:

Of course, given the underwhelming performances by favorites in the tournament so far, there’s no telling if Kentucky will be able to take advantage of its big opportunity here, either. But no team can potentially benefit from the opening weekend’s shake-ups as much as the Wildcats — and it’s not even close.

For all the wackiness of the tournament’s first weekend, a look at our model’s list of most likely tournament winners reveals plenty of tried-and-true programs at the top, from 2016 champion Villanova at No.1 to 2015 winner Duke in second place, 2012 champ Kentucky in third and ‘08 winner Kansas in fourth. Although some would-be inaugural champions — such as Gonzaga, West Virginia and Texas A&M — are lurking right below, the odds are pretty strong we’ll see a familiar team cutting down the nets in San Antonio a few weeks from now.

However, it’s still anybody’s guess which team that will be. Even Nova, as the nominal favorite, has but a 22 percent probability of winning the championship, according to the FiveThirtyEight model. Only four teams have double-digit title chances right now, which is just one more than there were before the tourney began. And remember, last year’s champ, North Carolina, was only at 9 percent at this stage of the NCAAs.

It’s only fitting that a season as wide-open as this one continues to be clouded with uncertainty about who the best team is — and whether it will even be the last one standing in two weeks. After a wild, weird first two rounds of the tourney, we can only hope for more of the same when play resumes Thursday.