Kentucky has to win two more games to become the first undefeated national champion since Indiana in 1975-76. And if the Wildcats succeed, the stats we have suggest that they’re a notch or two more dominant than those Hoosiers were.

Getting data on Kentucky is easy: The Wildcats’ every game has a digital box score that’s been compiled and analyzed by the likes of Ken Pomeroy and our own March Madness predictions. But Indiana’s statistical record from its undefeated season remains in the analog age, locked in scans of stat sheets. 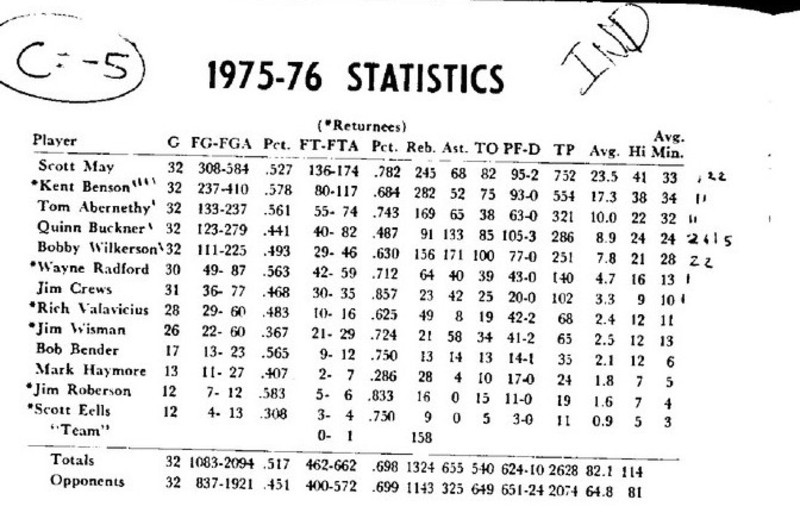 To truly measure the 32-0 Hoosiers’ greatness, we’d want to compile the schedule and results of every Division I team that year. Unfortunately, that would involve inputting dozens of data points from hundreds of image files. And our favorite speed typist was busy.1 So we simplified our analysis: We entered the scores of every Indiana game, then adjusted the Hoosiers’ average margin of victory by the average margin of victory of each of its opponents that season.2 That gave us an estimate of Indiana’s Simple Rating System scores, which otherwise aren’t available for teams that far back.3

What we found is that Kentucky has been slightly better, relative to its opposition, than Indiana was. Kentucky’s SRS is 29.05, meaning it would beat an average team on a neutral floor by about 29 points. Indiana’s estimated SRS is 27.49. Though that’s just an estimate, we can be fairly confident — about 90% sure — that Kentucky is the more dominant team. (Again, these are estimates only relative to the average team each season — the question of which team would win head-to-head is an entirely different one.)

We also did a bit more data entry from those NCAA.org scans of old team stat sheets to compare Indiana’s core stats with Kentucky’s. Our former ESPN colleague Dean Oliver, now with the Sacramento Kings, developed four factors to describe teams’ style of play. We estimated these for Indiana,4 and we also computed each undefeated team’s pace of play and its points scored and allowed per 100 possessions.

Indiana was better than Kentucky in a few ways: It allowed fewer points per possession, shot for a slightly higher effective field goal percentage, forced a greater rate of turnovers and allowed slightly fewer free-throw attempts per shot from the floor. But in every other respect, and every net measure, the Wildcats best the Hoosiers. 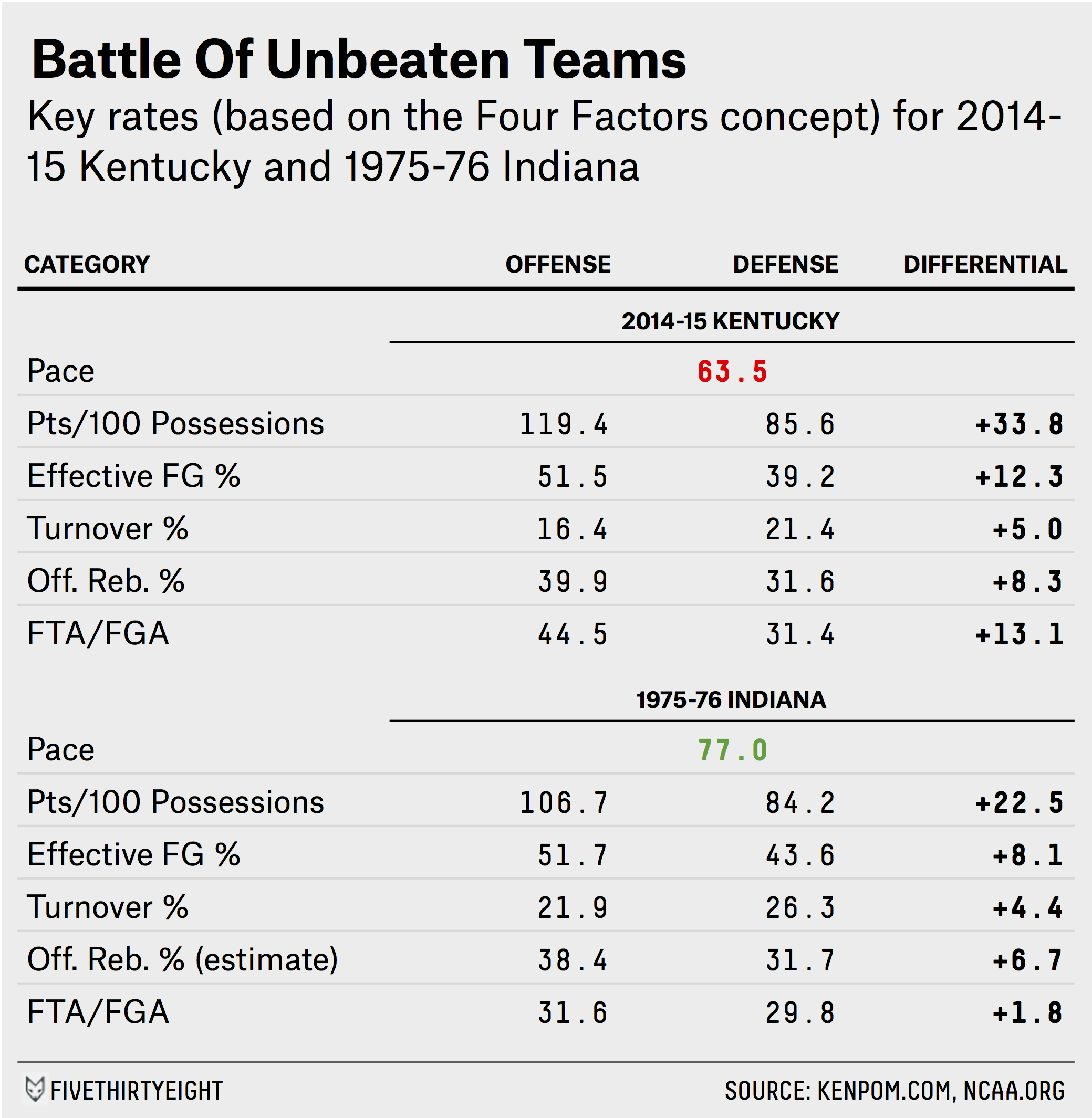 Of course, Kentucky is trying to finish as undefeated champion in 2015 — it’s not chasing the 1975-76 Hoosiers or perfection. Or, as Kentucky coach John Calipari keeps emphasizing to the media when they ask about his team’s quest to finish 40-0, “We know we’re not perfect. We’re undefeated, but we’re not perfect.” The coach is right, and he’d be just as correct if he were describing the 1975-76 Hoosiers.

Both the 2014-15 Wildcats and the 1975-76 Hoosiers are great teams — probably among the 25 best teams relative to their competition in the last 40 years of men’s college basketball. But neither team ranks as the best in recent decades. What sets apart Kentucky and Indiana is that they managed to win all their close games and remain undefeated. Indiana won two games in overtime, and five more by five points or fewer. Kentucky has also won two OT games, and two other games by five points or fewer. Each team played nailbiters against Notre Dame: Indiana won by three on Dec. 11, 1975, while Kentucky won by two on Saturday to advance to this weekend’s Final Four in Indianapolis.

We have reliable SRS data going back to 1985. Eight teams rank ahead of this season’s Kentucky squad, including two previous Kentucky teams: the 1996 two-loss champs, and the 1997 national runners-up. Those 1997 Wildcats — along with the No. 1 team on our list, the 1999 runners-up, the Duke Blue Devils — provide a warning to this year’s Kentucky squad that the best team usually doesn’t win the NCAA tournament. Even among the eight teams of the last 30 years that were more dominant than Kentucky has been so far this year, just two won the title. 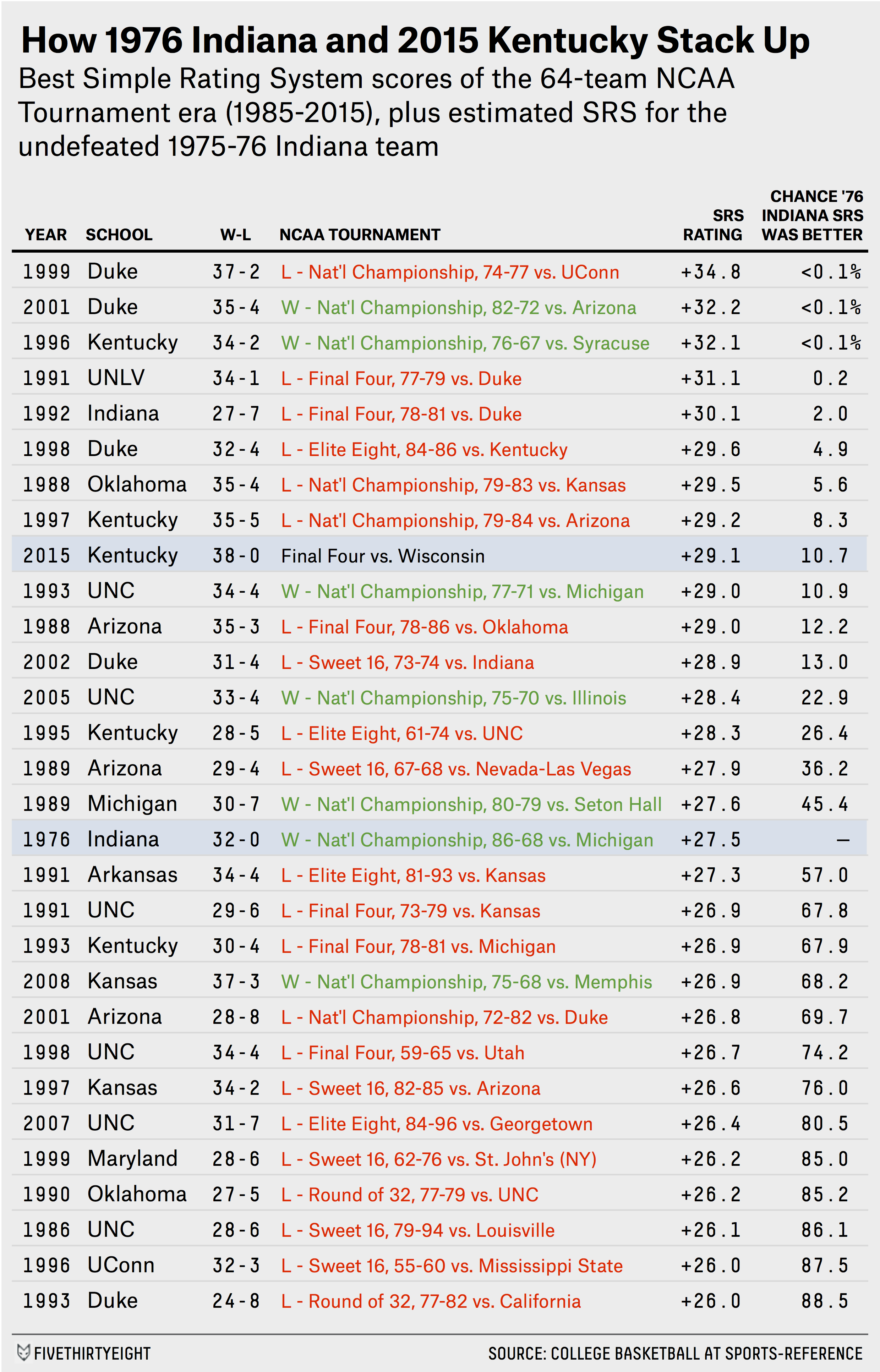