As we wrote Thursday, the 2014-15 Cleveland Cavaliers figure to be a very good basketball team after acquiring Kevin Love from the Minnesota Timberwolves in a trade this week. That move came on top of the offseason’s biggest coup — persuading LeBron James to return to Ohio after a four-season stint in Miami — and it gives the Cavs two of the top six or so players in the NBA. According to our calculations, Cleveland has the talent to rattle off more than 60 wins next season.

James is no stranger to helping rack up big win totals. His teams have won 60 or more games in a season three times in his 12-year NBA career, and 50 or more games eight times (pro-rating the 2011-12 Heat’s 46 wins in 66 games up to 57.2 wins in the NBA’s usual 82-game schedule). But, provided they stay relatively healthy next year, James’s new Cleveland teammates could supply him with the best supporting cast he’s ever had.

We can measure the contributions of James’s teammates by looking at how well a statistic like Real Plus/Minus (RPM) or Statistical Plus/Minus (SPM) would predict they’d play if his team replaced him with an average player. For example, RPM calls for the 2014-15 Cavaliers to produce a +9.6 efficiency differential, or the gap between offensive efficiency and defensive efficiency (and a predictor of future success). James is projected for a +9.1 RPM while playing 72.9 percent of the team’s available minutes. Given his performance and playing time, his teammates would need +0.7 RPM apiece for the team’s overall differential to add up to 9.6. This implies that a team composed of James’s Cavs teammates — plus an average player (with a rating of 0.0) taking up James’s 72.9 percent of available minutes — would instead have a differential of +2.9.

We can calculate this for each of James’s teams, using both SPM and RPM, to find the most talented supporting casts he’s played alongside: 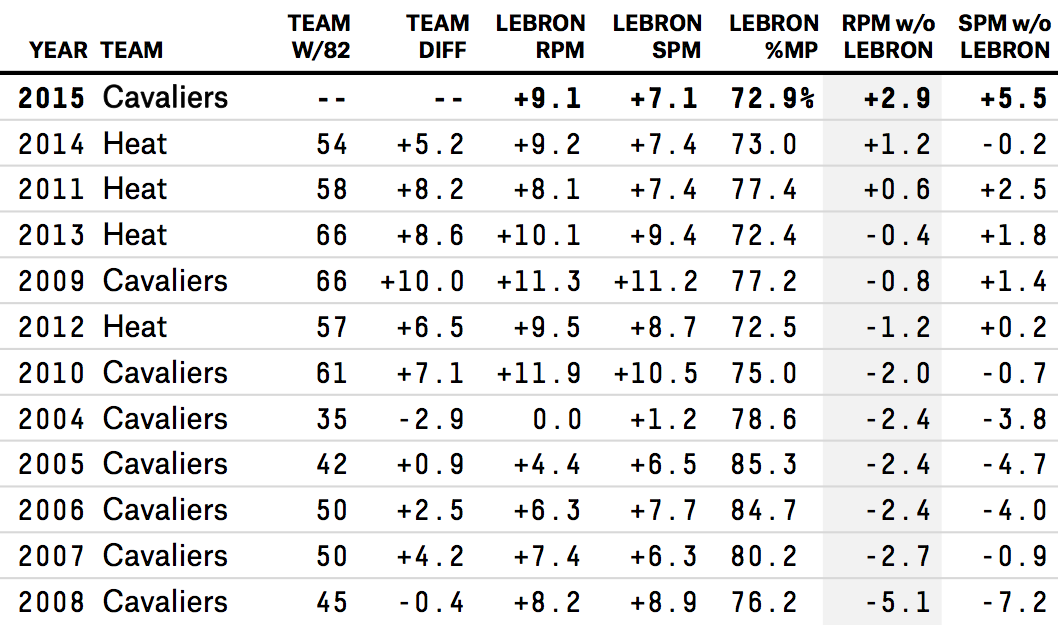 If we use our earlier projected distribution of minutes played, then the 2014-15 Cavaliers will easily feature the best supporting cast James has ever lined up with. However, as we noted earlier, there are a few reasons to think James’s new teammates might be closer to the pack.

First, injuries could matter quite a bit for this group. Kyrie Irving and Love combined for 148 games played last season but were limited to 67 the year before. Using Houston Rockets analyst Ed Kupfer’s rule of thumb that players should be penalized one game for each six missed last season and one for each 20 missed two years before (from a baseline forecast of 76 games played), the Cavs would project to give 2,125 minutes to players unaccounted for on our roster projection. If those replacement-level players performed at a level of -2.0 points per 100 possessions, then the 2014-15 Cavs’ supporting cast would produce an RPM differential of +1.4 without James, which would be only marginally ahead of that provided by James’s teammates on the 2013-14 Heat.

There’s also the issue of growing pains — and diminishing returns — when a new roster comes together. Love might be a perfect fit with James and the Cavs, but players joining unfamiliar teams tend to perform worse than their plus/minus ratings would predict. This could especially be true because of the adjustment that will be required of Love, who used 28.6 percent of the Timberwolves’ possessions while on the floor last season. He’ll be joining forces with James (31.0 percent of possessions used with the Heat), plus Kyrie Irving (28.1 percent) and Dion Waiters (25.8 percent). Following in the footsteps of the 2010-11 Heat, next year’s Cleveland squad will probably blow away records for possession-users coming together on a team. However, it’s not always easy to predict how much of a difference there will be between the sum of a team’s parts and its actual performance.

Even so, the Cavaliers are considered the favorites to win next year’s NBA championship. A lot of that is due to James’s return, but it doesn’t hurt that he’ll play with the most gifted set of teammates he’s ever had.