Rather than douse speculation about which additional Republicans might enter the presidential sweepstakes, Rick Perry’s announcement that he would seek the White House seemed only to stoke the fire. At least five prominent Republicans — Sarah Palin, Representative Paul Ryan, Gov. Chris Christie, Rudolph W. Giuliani and George Pataki — are being linked to potential bids.

Some rumors are firmer than others: whereas Ms. Palin has said repeatedly that she is considering a presidential bid, Mr. Christie has denied his interest at every opportunity. And of course, that these politicians might seek the White House does not mean that their bids would succeed, or even necessarily lead to a respectable finish. Mr. Perry, who as governor of Texas has been an important player in Republican politics for a decade and has been laying the groundwork for a campaign for months, may have set an unrealistic example (and Mr. Perry’s campaign has been far from error-free).

But ignore that for a second. Suppose that these candidates all woke up one morning and found themselves surrounded by competent strategists, press handlers, pollsters and information technologists.

Suppose that they knew that the residents of Iowa and New Hampshire would not hold too much against them for entering the race so late. We won’t assume that they’ve already raised money — the election genie doesn’t grant every wish — but suppose that they could get a fund-raising network in place relatively quickly.

This lets us focus on the more fundamental question: Is there likely to be interest in their campaigns among crucial G.O.P. constituencies?

In order to consider this, we first need to think about where the current Republican candidates stand. Where are the strengths in the field, and where are the gaps that one of these candidates might hope to fill?

One of my favorite ways to evaluate this is with a graphical
representation in which we plot the candidates in several
dimensions: 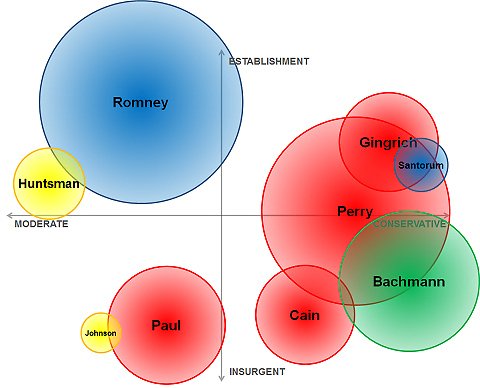 The first dimension represents candidates’ overall ideological positioning from left to right, relative to other Republicans. (In this context, “left” means moderate or center-right, while “right”
means quite conservative.)

The second dimension, which runs from the top to bottom of the chart, is what I call the insider/outsider or the establishment/insurgent axis. It has do to, in essence, with whether the candidate is running a grass-roots campaign that argues against entrenched interests or is trying to use those interests (like access to money and favorable media coverage and endorsements from influential party officials) to their advantage.

There is room to analyze how I’ve positioned the individual candidates. Libertarian-minded candidates like Mr. Paul are never going to be easy to classify on a chart that includes just one dimension for political ideology. And I’m not quite sure where to put Rick Santorum on the establishment/insurgent axis.

Basically, you have two candidates anchoring the field: Mr. Romney in the establishment/moderate quadrant, and Mr. Perry considerably to his right, but straddling the establishment/insurgent divide. Then you have a number of satellites surrounding Mr. Perry, perhaps only one of which — Michele Bachmann — is large enough to have her own gravitational field. You have Jon Huntsman, who in recent days has been moving away from Mr. Romney and toward the southwestern corner of the chart, quite explicitly criticizing his party’s establishment from the center. And you have the libertarian candidates, however they might figure into the equation.

Much of this reflects the entry of Mr. Perry. Before he entered the race (and before Tim Pawlenty exited), the distribution of candidates was somewhat more even. On the other hand, there was a lot more white space before — lots more turf up for grabs — which is why Mr. Perry might have felt compelled to run. 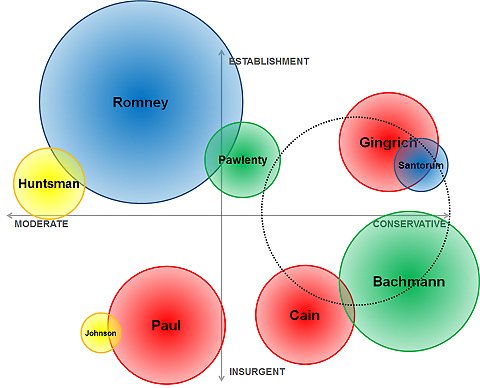 Still, even with Mr. Perry in the field, there is some unoccupied territory. Which candidates might be in the best position to claim it?

One is Paul Ryan of Wisconsin.

Mr. Romney sometimes gets sympathetic treatment from these groups — but oftentimes not, despite the fact that he seemed to be sufficiently conservative for them in 2008. And Mr. Perry has not yet been embraced by them, perhaps out of concerns about his electability.

So Mr. Ryan could squeeze his way in. In addition, the field is light on Midwestern candidates after Mr. Pawlenty’s exit from the race, giving Mr. Ryan a potential geographic advantage. 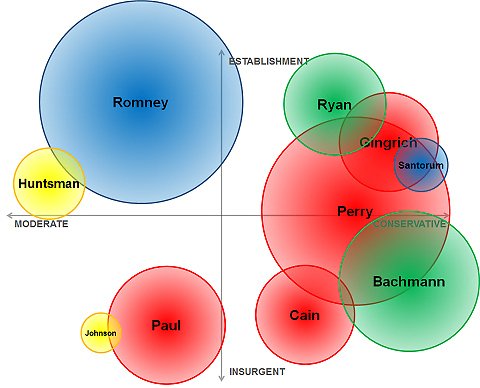 The other candidate who could find himself with some running room is Mr. Christie of New Jersey.

It’s not clear that Mr. Christie is necessarily any more conservative than Mr. Romney — and Mr. Romney may not be conservative enough to win the Republican nomination. But Mr. Christie is considerably fresher and has had fewer opportunities to get himself in trouble, and therefore might have more flexibility in how he positions himself: as a plucky, authentic outsider to rank-and-file Republican voters, as a pragmatic problem-solver to independents — but as an electable, pro-business (and anti-union) conservative to party elites. 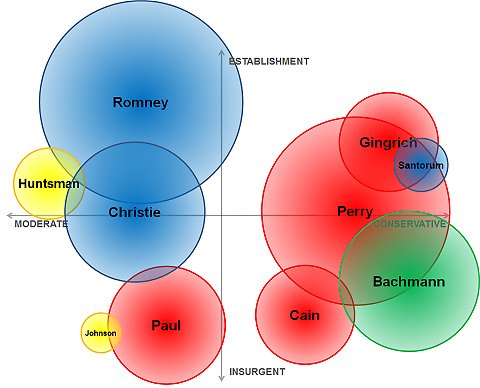 Any or all of that could blow up. It’s one thing for an actual, declared candidate to be all things to all people. Only the very best candidates, like Ronald Reagan, can pull it off. (Mr. Reagan was a movement conservative but also won plenty of Democratic votes.) When a potential candidate is billed as all things to all people, be skeptical; those expectations may not be realistic and it may be almost impossible for the candidate to live up to all of them at once. Still, Mr. Christie has a lot of raw political talent and could cover a lot of ground.

Sarah Palin, on the other hand, is a known commodity who would have trouble re-inventing herself. And as an insurgent conservative, she’d be moving onto some very crowded turf, having quite a bit of overlap with Mrs. Bachmann, Mr. Perry and Mr. Cain. 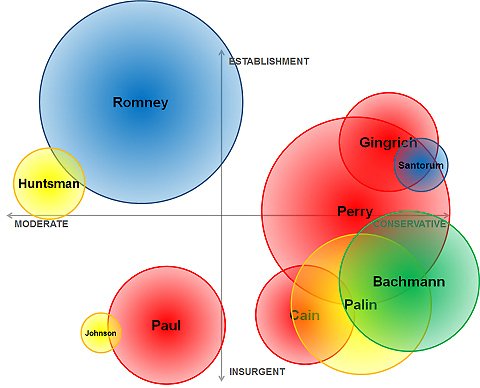 I’m not sure that all of these candidates could survive Ms. Palin’s entry, even in the immediate term. Mr. Cain might be the first to fall; his momentum seemed to peak several months ago. Mrs. Bachmann also has stopped her ascent up the national polls — although she’s doing well in Iowa– and Ms. Palin would take a bite out of her support. Mr. Perry might be less vulnerable, but with Ms. Palin running, the effect of future mistakes might be magnified.

It may be just as likely, however, that the loser is Ms. Palin: she could find the type of Republican voter she is courting is already pretty happy with Mrs. Bachmann and the other choices, and that she has trouble breaking out.

Mr. Giuliani, presumably running as a moderate, would have fewer candidates to compete with. But Mr. Romney would be a big problem for him. It’s not that Mr. Romney is all that moderate himself (he ran as a conservative in 2008). But given the mood of the Republican electorate right now, you aren’t seeing a lot of calls for someone to move into the race from Mr. Romney’s left. And the issue that Mr. Giuliani often used to position himself to the right of other Republican candidates, national security, will have less salience than it did four years ago, in part because it is a comparative strength of Barack Obama’s. 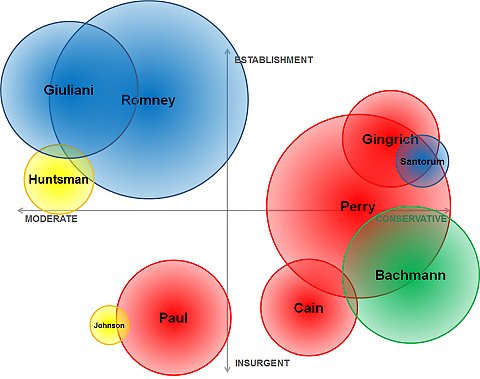 Still, Mr. Giuliani often polls at about 10 percent when he is included in surveys. That percentage might fade if he were to run, as it did in 2008. But if Mr. Giuliani were to take even 3 or 5 percent of the vote from Mr. Romney, that could have an impact, especially in New Hampshire.

It’s not that Mr. Pataki has a poor résumé: to the contrary, being the thrice-elected governor of a very big, very liberal state like New York is quite a credential for a Republican. But Mr. Pataki was last on a ballot in 2002 and, in contrast to many Empire State politicians, kept a relatively low national profile. It’s just the sort of candidacy that might have a chance if Mr. Pataki had a lot of time to introduce himself to voters. But as a late entrant, his profile (competent former Republican governor from a big blue state) is liable to be overlapped too much by Mr. Romney’s. 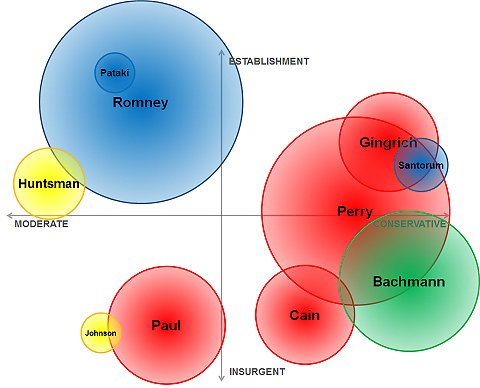 But perhaps several of these candidates will decide to run, producing a very crowded field. 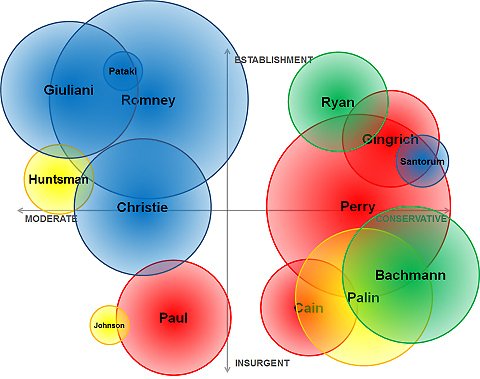 One seismic factor affecting Republicans’ decision is that Barack Obama is now exceptionally vulnerable for an incumbent president. If you’re a Republican and you think you can become president, that’s doubly important for you; not only does it mean that those aspirations are more likely to be fulfilled this time around, it also means that they’re less likely to be realized in 2016 or 2020 because there’s now more chance that some other Republican will already occupy the Oval Office by then.

So real estate in the Republican primary field has become more valuable. And, despite Mr. Perry’s entry, there’s still some available for the taking. Not much of it is prime real estate, but like the nooks and crannies of Manhattan, it may still be in demand.

The odds of these late entries succeeding are pretty low. If four of these candidates enter the race, three of them are liable to regret it. But the fourth just might become president.