Fireworks are the quintessential American way to celebrate the land of the free and the home of the brave on the most American of holidays: the Fourth of July. But as brave as we may be while striking that match and lighting that explosive, fireworks are dangerous. Their use led to roughly 11,400 injuries and eight deaths in 2013, according to the U.S. Consumer Product Safety Commission (CPSC).

It’s not surprising the CPSC’s Fireworks Annual Report, which compiles injury data from hospitals, showed that 7,400 of last year’s accidents happened between June 21 and July 21. The commission’s breakdown of injuries by type was limited to those in that 30-day period, and there were some interesting takeaways:

We were curious how the rate of injuries has changed over the decades, specifically since the very patriotic Bicentennial — but the CPSC report was first issued only in 1998.

Before we explore the older numbers, let’s take a minute to consider the law. Many states have loosened consumer firework regulations since 2000. Consumer fireworks are technically legal in 46 states (only Delaware, Massachusetts, New Jersey and New York completely ban them), but, according to the American Pyrotechnics Association (APA), 27 states have age requirements for purchasing consumer fireworks; 18 have laws limiting the dates when consumers fireworks can be sold (usually the one or two weeks around Independence Day and New Year’s Eve); and 24 ban consumers from buying and/or using aerial fireworks.

So, the rules have changed, but have injury rates steadily increased? Last year’s injury rate might raise concern because it was the highest in the history of the CPSC report — and 31 percent higher than it was in 2012. But though that 31 percent increase sounds scary, it’s 31 percent of a small number; injuries increased from 2.8 per 100,000 Americans in 2012 to 3.6 in 2013. And while the CPSC’s first annual report came in 1998, the organization has data for prior years. Add in those years, and the picture looks a lot less alarming. 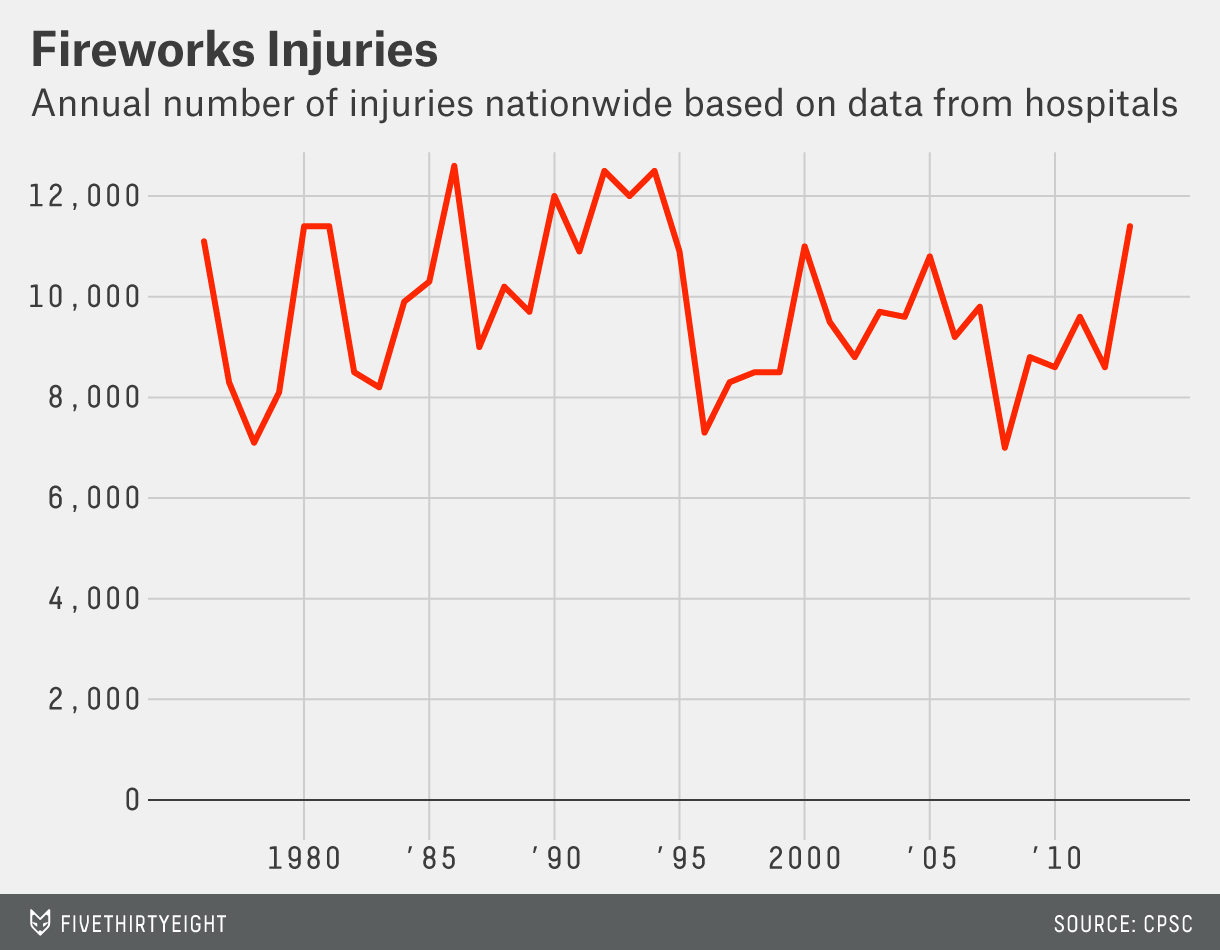 CPSC data shows there were 11,100 fireworks-related injuries in 1976, similar to last year’s 11,400. And when compared with data from the Department of Commerce and the U.S. International Trade Commission, we see there were 38.3 injuries per 100,000 pounds of fireworks consumed in the Bicentennial year, but there were just 6.1 injuries per 100,000 pounds of fireworks consumed last year. This rate is still an increase from the 4.1 rate in 2012 — which had stayed relatively consistent since 2002 — but some confounding factors might cloud that significance. 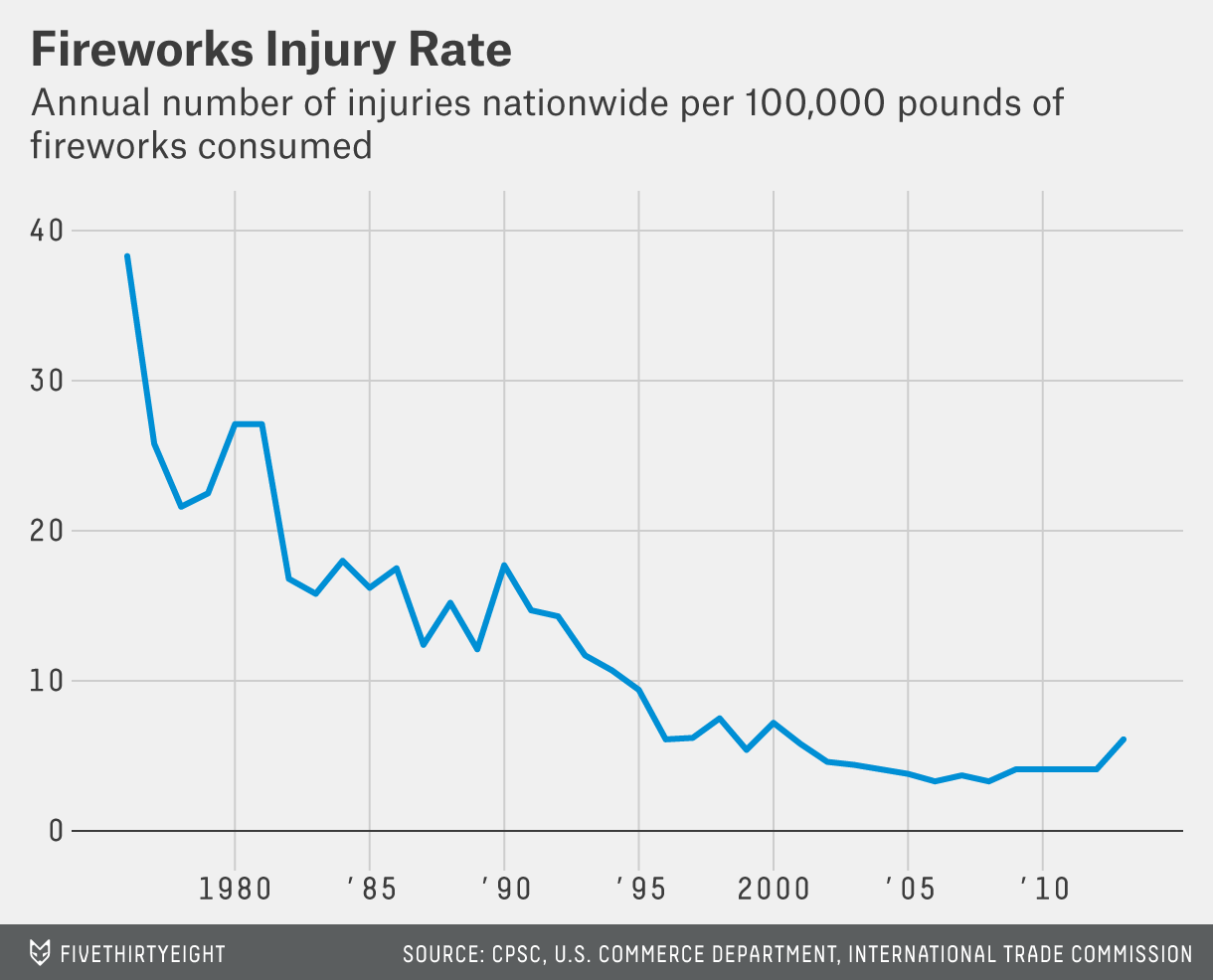 Nationwide, fireworks consumption decreased from 207.5 million pounds in 2012 to 186.4 million pounds in 2013. It would seem that less consumption would mean less use, but the numbers are estimated based on amount of imports and domestically manufactured fireworks, rather than actual sales. That means that factors that affect imports and domestic production, but not sales, would change the estimate to be less accurate. And in 2012, that’s exactly what happened. Widespread drought led to an unprecedented number of municipal fireworks bans, which meant less sales. Because of this, there was a high level of existing inventory in 2013, which means that there were less imports necessary to meet the demand.

While there is anecdotal evidence that sales increased significantly from 2012 to 2013, we couldn’t find any hard nationwide numbers. That is, we have no idea how last year’s injury rate (or 2012’s, for that matter) actually compares with previous years.

Based on historical numbers dating to 2002, it certainly appears as if Americans can generally be trusted with their fireworks. But we don’t know whether the modest uptick in injuries recently is an abberation or the beginning of a trend. Either way, it’s worth keeping in mind the risks associated with fireworks as we celebrate our country’s birthday.