The New York Rangers’ Stanley Cup hopes are officially on life support. New York trails the Washington Capitals 3-1 in the series going into Friday night’s game, and the Rangers have just a 16.5 percent probability of advancing to the Eastern Conference Final if you calculate their odds using each team’s regular-season Simple Rating System (SRS) scores.

The Blueshirts’ potential upset loss is particularly significant because they won the Presidents’ Trophy for the 2014-15 season, an award given annually to the team with the NHL’s best regular-season record. By definition, winning the trophy is an accomplishment reserved for great seasons, but there’s also a reputed downside to the honor. The widespread perception around the league is that the Presidents’ Trophy is cursed, its winner having only gone on to hoist Lord Stanley’s Mug eight times in the 28 full seasons since the Presidents’ Trophy was first awarded for the 1985-86 season.

And you can change that record to 8-for-29 if the Rangers fall to the Caps.

But hockey is a notoriously unpredictable sport. If the competing roles of talent and luck in a team’s record are roughly even over an 82-game regular season, randomness reigns supreme in the playoffs, where even great teams can be beaten in a best-of-seven series if the puck bounces the wrong way a few too many times. Luck may be hockey’s “bullshit dump,” but there’s also no denying that the game is, in many ways, built on a foundation of chaos.

Given that, have the Presidents’ Trophy winners really won all that much less than you would expect from teams with their talent levels?

As it turns out, not only have they not won less, they’ve actually won slightly more. Specifically, they’ve captured more Cups and more overall playoff series than we’d expect based on their regular-season SRS ratings after simulating the postseason brackets for every year from 1986 to 2014: 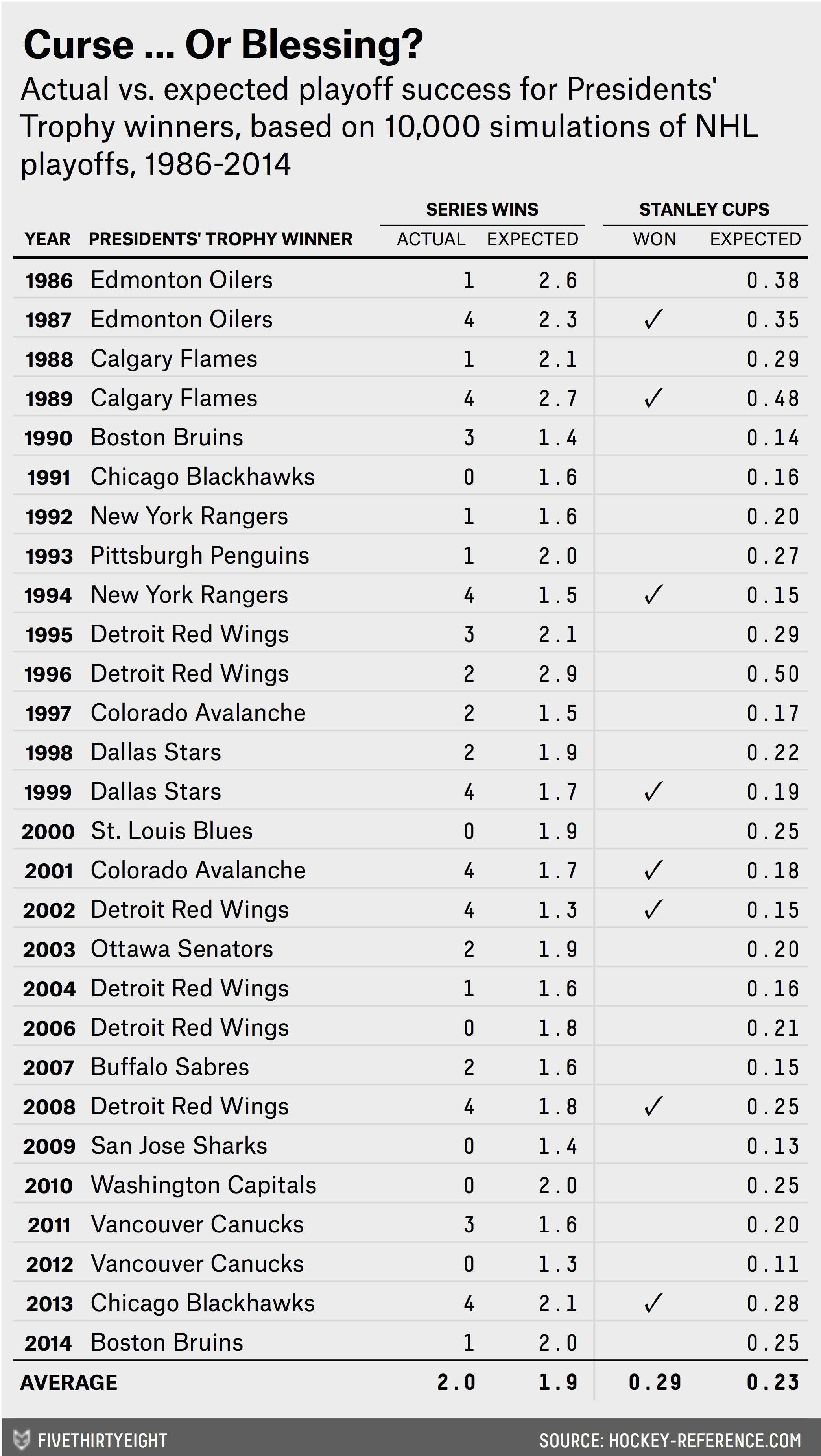 Statistically, then, there’s no significant difference between how much playoff success you would expect Presidents’ Trophy winners to have based on their regular-season performance and how much they actually wound up having.

In other words, there is no curse of the President’s Trophy.

The Rangers might become the latest regular-season league-leading squad to fall short of the Stanley Cup. But that’s more a testament to their own play — and the chaos of playoff hockey — than any curse hanging over Madison Square Garden.