In 1964, Ron Hunt was a young second baseman just starting to make his bones in the big leagues. He played for the Mets, a terrible team still years away from transforming into Amazin’ glory. On May 9 of that year, they were playing the mighty Cardinals, a loaded team that would go on to win the World Series. The man on the mound that day was Bob Gibson, one of the best and most terrifying fireballers in baseball history.

Gibson had staked the Cards to a big lead, and he now needed just two more outs to bag a complete-game win. Hunt was due up next, and he knew all about Gibson’s blazing fastball, his tendency to come inside with it, and his neverending quest to intimidate batters into submission.

“I started messing with my shoelaces,” said Hunt 51 years later, speaking in short, hard-edged bursts from his farm in Wentzville, Missouri.

At the time, he figured that fiddling with his laces and stalling for time would do one of two things: Break Gibson’s concentration, piss the big right-hander off, or both. A warning rang out from the dugout: “ ‘Gibson is gonna drill you!’ Sure enough, he hits me.”

Shaking off the impact of the pitch, Hunt spotted the ball coming to rest near his feet. He picked it up, turned toward Gibson … and flipped it back to him. Trotting down to first base, Hunt was greeted by first baseman Bill White, who wanted to know if Hunt was OK after getting drilled by the one fastball that caused more nightmares than any other of his generation.

Flipping balls back to pitchers wasn’t something Hunt reserved for titans of the game like Gibson. He did it nearly every time after getting plunked by a pitch. And nobody in baseball’s modern era has been hit more times in one season than Hunt. He retired in 1974 with 243 hit-by-pitches (HBPs)1, but his record-breaking season came when he was playing for the Montreal Expos in 1971. That year, he got plunked 50 times, still the highest total for anyone after 1900.2

It’s one thing to be a record-holder. It’s quite another to absolutely obliterate the field in one statistical category. Check out how far ahead of the pack Hunt’s 50 HBPs look compared to all other post-1900 totals.

That’s a 43 percent spread between Hunt’s 50 and Baylor’s runner-up effort. Pick your most unbreakable record, and Hunt’s dominance dwarfs it. Joe DiMaggio’s 56-game hitting streak? Pete Rose came closer to Joe D at 44 than Baylor did to Hunt.3 Cy Young’s 511 wins? Walter Johnson’s 417 Ws came closer. Barry Bonds’s 73 homers in 2001? Nope. Hack Wilson’s 191 RBIs in 1930? Nope. You could argue that in modern baseball history, no player ever crushed all others in any one facet of the game the way Hunt did with his plunk-fest in 1971. 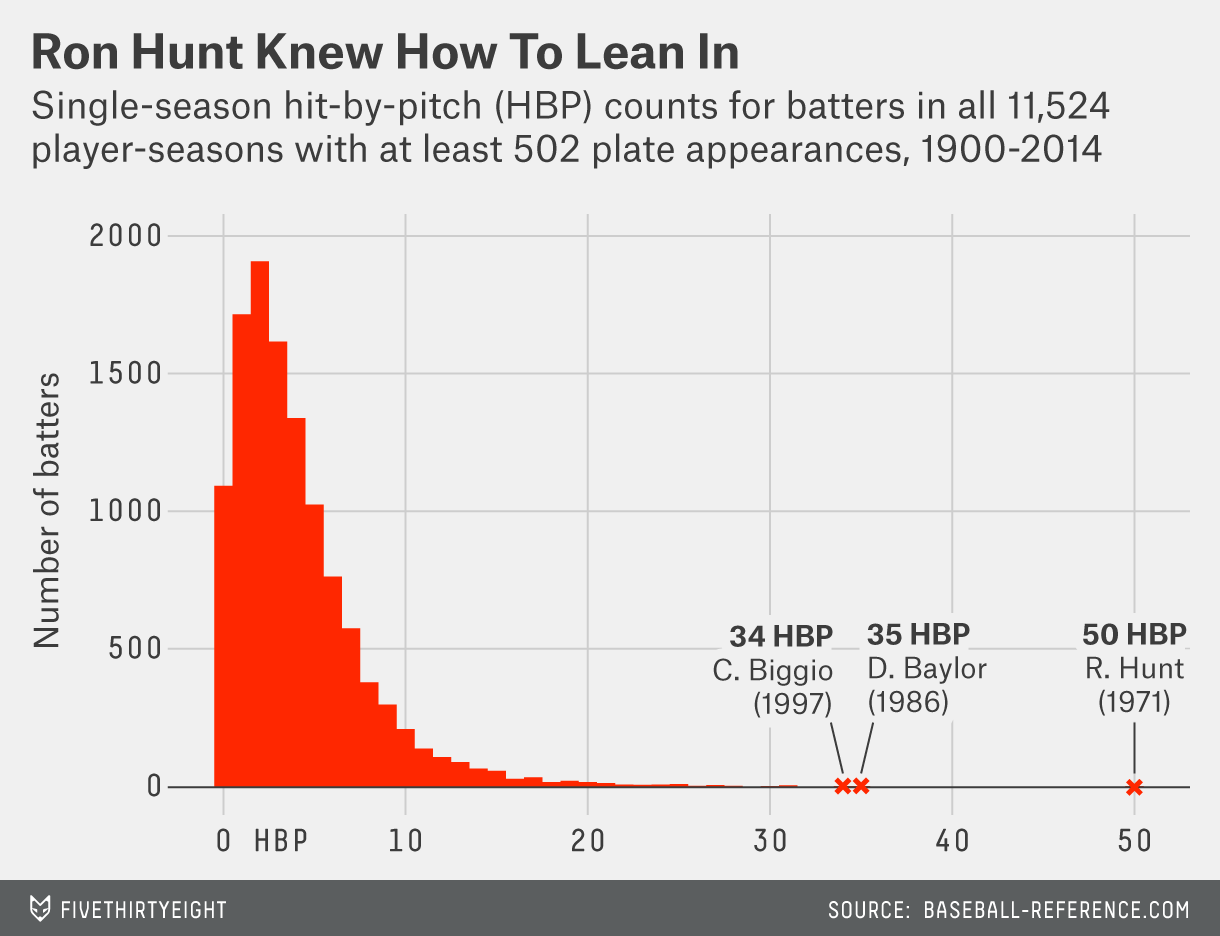 When we assemble every player since 1900 who’s ever logged 502 or more plate appearances in a season,4 Hunt’s lonely spot way over on the right side of that chart is 13 standard deviations above average for hit-by-pitches in a season. If you’re not a math expert, think about that number this way: There’s ostensibly nothing in our everyday lives that could ever be anywhere close to 13 standard deviations above the norm — not a man who’s 8 feet tall, or 700 pounds, or blessed with a 200 IQ.

When you’re 13 standard deviations ahead of any other season, it suggests somebody didn’t just get lucky — he got really, really good.

“His hitting style was that he crowded the plate,” said Bill Stoneman, Hunt’s teammate for three seasons in Montreal, including his record-breaking campaign. “Back when we played, pitchers pitched inside a little more than they do now. When that pitch came inside, he didn’t budge. He just let the thing hit him.”

“First I would blouse the uniform — this big, wool uniform, I would make sure it was nice and loose,” Hunt said. “Then I’d choke way up on the bat, and stand right on top of the plate. That way, I could still reach the outside pitch. That was the Gil Hodges philosophy on hitting: The two inches on the outside corner were the pitcher’s, the rest was his. I thought, ‘If I can take away those two inches, and he’s not perfect, I can put the ball in play and get some hits. And if he comes inside, I can get on base that way, too.’ ”

This, to Hunt, was gamesmanship, a way for a power-deficient hitter to gain an edge on the pitcher both physically and mentally. It was also, if we’re applying the letter of baseball law, illegal. A right-handed batter, Hunt would set up with his left arm hanging over the plate. Major League Baseball’s Rule 6.08(b) stipulates that the batter must make an “attempt to avoid being touched by the ball” to be awarded first base after getting hit by a pitch. Hunt made no such attempt.

“The ball would be headed toward his elbow or his ribcage,” said Dave Van Horne, who called Expos games on TV and radio for the first 32 years of the franchise’s existence. “He would turn his back away from the pitcher and deflect the ball with that spin move, so that he avoided those direct hits. To the average person, it would look like he was trying to get out of the way of the pitch, when, in fact, he just wanted to stand in there and take it.”

“Did the umpires know what he was doing?” Van Horne asked rhetorically. “Sure. But I don’t think they wanted to get into many arguments with him!”

At 6 feet tall, 186 pounds, Hunt wasn’t the biggest guy, even if he was strong for his size. But it was his fearlessness, as well as his quick and nasty temper, that earned him respect within the game. No other player, then or now, had the courage to flip baseballs back to pitchers after getting hit. Most players don’t want to piss off the guy who could hold your life in his hands, and really don’t want to do it when that guy is Bob Gibson. 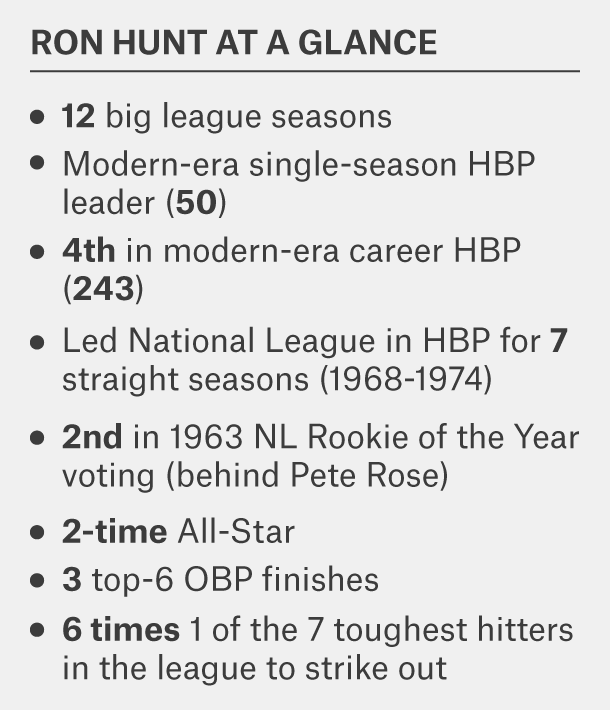 Never was Hunt’s win-at-all costs approach better on display than in 1971. His HBP pace started relatively slowly that season, with Hunt getting hit seven times in his first 33 games. Then on May 26, he put on a clinic, reaching base four times in five trips to the plate, via a walk, a trademark slap single, and two plunks in an 11-1 over the Braves. On June 6, Padres lefty Dave Roberts fired a nine-hit shutout against the Expos … and Hunt still found a way to get hit twice. On June 25, he absorbed three blows in a single day, with one HBP in the first game of a doubleheader, and two more in the nightcap; that first one came against Nolan Ryan, whose fastball could bore a hole into Fort Knox. Finally, on Aug. 7, Hunt led off the game against Reds right-hander Jim McGlothlin … and got nailed for the 32nd time that season, breaking the 20th-century record held by long-ago Cardinals outfielder Bobby Evans.

But he still had 18 bruises and one major brawl to go. Ten days later, Hunt led off the top of the third against Padres righty Steve Arlin. He took a fastball in the ribs, winced, then watched the ball come to a dead stop right next to him. Keeping with tradition, Hunt picked the ball up and gently tossed it back to Arlin. His next at-bat came in the fifth, with a runner on first and nobody out. Again Arlin tried to come inside with a fastball. Again he whacked Hunt with the pitch, this time on the arm. The ball bounded a few feet up the first-base line. Hunt walked toward it, ready to scoop the ball up and lob it back. Padres catcher Bob Barton, widely regarded as a nice guy, had had enough of Hunt’s act. Barton scurried to the ball, and grabbed it before Hunt could get it. Hunt turned toward Barton, ripped his mask off with two hands, and punched him right in the jaw. A fight ensued, the benches emptied, and in the end Hunt was the only player ejected. He returned to the lineup the next day and got drilled by Padres lefty Fred Norman.

Hunt took all of that beating with pride. He was keenly aware of his limited talent and reveled in beating his opponents with guile, and a mean streak.

All that abuse took its toll over the years. Now 73 years old, Hunt can reel off his 15 surgeries, 12 of them from baseball: one on the left shoulder, four on the right, both knees, a steel rod in his back, you name it. And none of that counts the injuries he’d shake off to play the next day.5 Don Drysdale once threw a fastball so hard, it left a baseball-shaped imprint on Hunt’s shoulder blade for weeks.

Hunt eventually gave in, donning a protective rubber sleeve around his ribs that was so tight, it was painful to watch him pull it on. That one provision aside, Hunt’s body was fair game, with none of the modern armor that helped next-generation HBP leaders like Biggio trot to first base again and again.

Jacques Doucet, a sportswriter for La Presse in Montreal for the Expos’ first three seasons and the French-language TV voice of the team for their final 33 years, was one of Hunt’s closest friends. They’d go on fishing trips together, with Hunt airing his grievances against half the league and Doucet sitting and listening. They remain close to this day, with Hunt offering little nuggets of baseball wisdom that never fail to make Doucet smile.

“Ronnie always used to say one thing to me in jest,” Doucet said. “ ‘A lot of people give their body to science. I gave mine to baseball.’ ”