Spike Lee and Toni Morrison are two of my students’ favorite authors. Of course, their inclusion on our syllabus is not without controversy. For instance, Morrison’s beloved “Peeny Butter Fudge,” a collaboration with her son Slade, includes a recipe on the last page, and my students really want to make it. While there are no peanut allergies in my class this year, the recipe is much too sugary.

My students are 4 and 5 years old, and finding excellent books for them featuring people of color, kids with two dads, kids with no dad, or girls who slay dragons is a persistent challenge. Like many educators, I find myself returning to a handful of treasured titles, including “Peeny Butter Fudge” and Lee’s “Please, Baby, Please.”

Annual statistics from the Cooperative Children’s Book Center bear out what I know from visits to my local library. For three decades, the librarians at the center, a modest outfit at the University of Wisconsin, have tracked one dimension of diversity in books for children and young adults: racial diversity. Children’s and young adult literature (“kid lit”) represent a stubbornly white world even as U.S. children are increasingly people of color.

Since the center began tracking data in 1985, it has found underrepresentation of people of color both as authors and characters. Originally, it only tracked African-American authorship and content, finding just 18 new titles by African-American authors that first year. Over time, educators and other stakeholders requested data on other groups as well. So the center’s librarians began counting books by or about American Indians, Asian-Pacific Americans, and Latinos. Going forward, they will add a new category: books featuring a character with a disability.1

In any given year, the number of books about one racial group would go up slightly while the number of books about another group decreased. However, Kathleen Horning, the center’s director, and other advocates for diversity in children’s literature see indications that 2014 might be the year the trends began to change. In February, the center released its newest data, which for the first time showed a year-over-year increase in every category.2 The quantities remain tiny when considered as a percentage of children’s books published in the U.S. 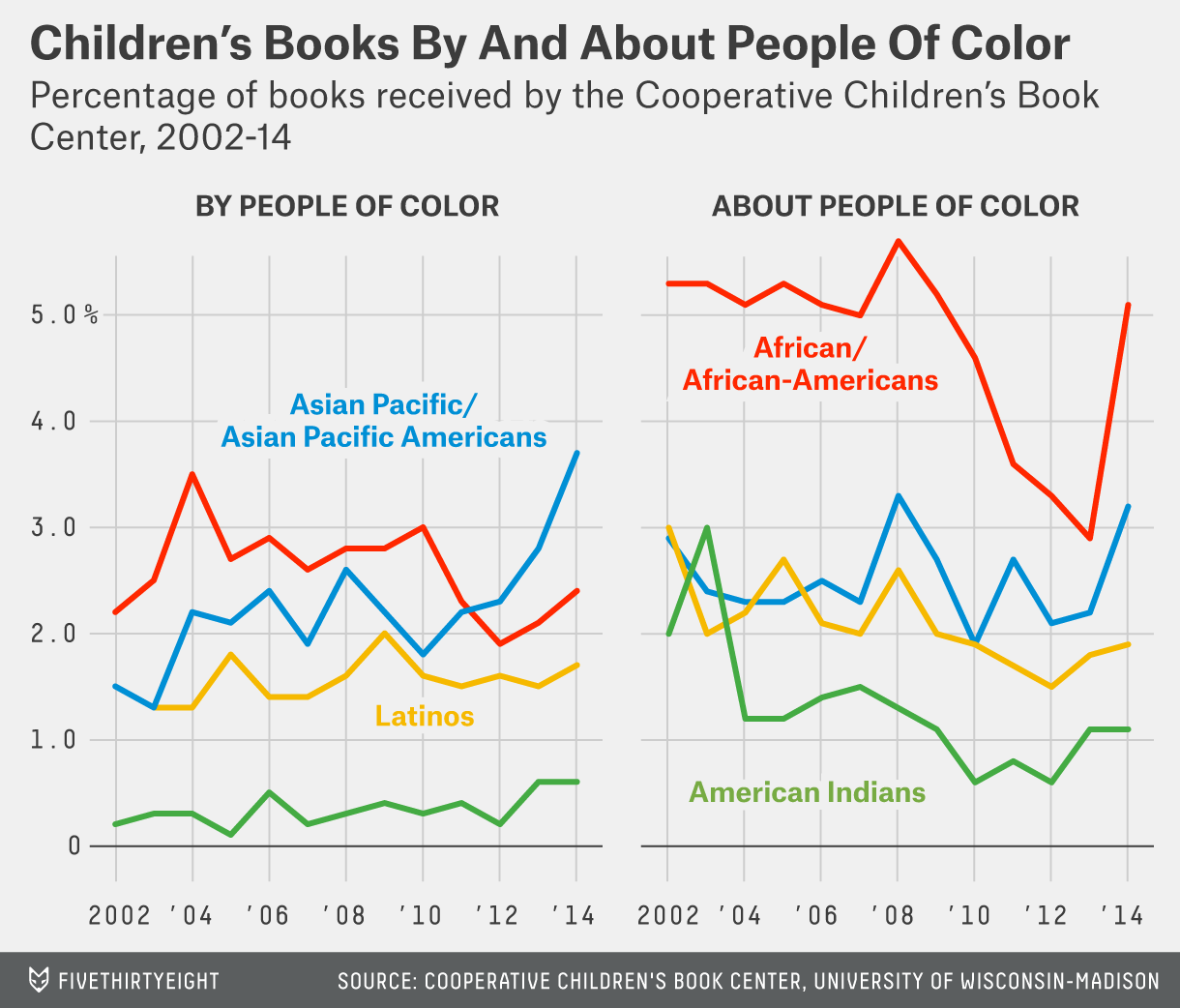 It, of course, remains to be seen whether the rise in the number of diverse books published in 2014 is a blip or an upward trend.

While the changes are slight, the efforts underway to change the face of kid lit are significant. In May, a group of authors and industry professionals launched a revived effort to change children’s publishing using tools that were not available to previous generations of activists. The volunteer-led coalition known as We Need Diverse Books has raised more than $334,000, largely through crowdfunding, fueled in part by a campaign on Twitter using the We Need Diverse Books hashtag.3

The efforts of We Need Diverse Books echo those of the Council on Interracial Books for Children, which formed in the 1960s in connection to civil rights work in Mississippi. Indeed, movements to change the faces of children’s literature often come hand in hand with broader social movements. It may be no accident that the year that brought us #BlackLivesMatter also brought us #WeNeedDiverseBooks.

Advocates talk about the potential of kid lit to serve as both “windows” and “mirrors” — windows into life experiences of others and mirrors that reflect and affirm kids’ life experiences. When whole groups of people appear as stereotypes or not at all, all children lose out. Zetta Elliott, author and advocate, and Christopher Myers, an author, illustrator, and recent addition to the We Need Diverse Books advisory board, have each made the case that these are matters of life and death. Elliott used that phrase in a 2009 open letter to the publishing industry. In a 2013 essay in The Horn Book, a children’s literature magazine, Myers wrote: “The plethora of threatening images of young black people has real-life effects. But if people can see us as young dreamers, boys with hopes and doubts and playfulness … perhaps they will feel less inclined to kill us.”

Industry experts offer a variety of reasons for the lack of diversity in children’s literature, and We Need Diverse Books is using a multipronged approach to address them. One of the group’s initiatives aims to help change who is sitting at the desks of publishing houses reviewing incoming manuscripts. In 2014, Publishers Weekly’s annual salary survey of the industry inquired for the first time about race; 89 percent of respondents who identified their race said they were white. Authors of color report that the overwhelming whiteness of the publishing industry can mute them. They hear again and again that their characters aren’t relatable, or that their books aren’t child friendly, or that they are for the wrong audience. S.E. Sinkhorn, publicity chair for We Need Diverse Books, said that the organization is in talks with many publishing houses, encouraging them to hire diverse interns, and that grants from We Need Diverse Books will support some candidates who could not otherwise afford to take those internships.

We Need Diverse Books is also sponsoring various contests, both to publish first-time diverse authors and to honor new books by those in the field. These efforts stem from the recognition that many diverse authors are already writing but may need help connecting to publishers or, if already published, to wider audiences. The Walter Dean Myers Award will recognize notable books by diverse authors, amplifying those books’ impact and presumably their sales.

Sales, of course, are a big issue. “The market for your work just isn’t there” is a line that authors of diverse books say they hear frequently. At the same time, some authors find that their books don’t receive the same marketing push as books by white authors. They also find their books carted off to a separate section of the library, “multicultural literature,” where they stand apart from general interest. Small publishers like Lee and Low have arisen to specifically publish and promote diverse books, attempting to disprove the notion that there’s no market for them.

But when those in publishing say there’s no market for diverse books, they may be right, in a sense, because at least one major market for diverse books has winnowed even as the appetite for them has stayed strong. “We have seen a real change as school and library budgets have been gutted,” Horning said. Great Society funds in the 1960s supported school libraries and at the same time the rise of many authors encouraged by the Council on Interracial Books for Children. In the years immediately following the financial collapse of 2008, school library spending on books decreased by 10.5 percent. Authors like Nikki Grimes have noticed publishers’ shifting toward “blockbuster-craving bookstore markets.”

So far, We Need Diverse Books has not made library funding a focus. Instead, in addition to its internship program and writing contests, it’s focusing on amplifying diverse books through publicity. The organization has created toolkits to help librarians select and promote diverse books, established an author visit program to bring diverse authors into classrooms, and begun organizing a Diverse Books Festival to take place in Washington, D.C., in 2016.

Whether We Need Diverse Books maintains its momentum will depend not only on the efforts of the coalition organizers but also on media attention and political momentum around equity more generally. “Our campaign would not have been as successful as it has been if the tone wasn’t there in the general public already,” Sinkhorn said. “We gave it the push and the outlet.”

The librarians at the Cooperative Children’s Book Center have begun surveying review copies of books for 2015. “We are not under any impression that that shift is going to happen immediately, not in the next year, not five or maybe 10,” Sinkhorn said. Still, she said, she’ll be keeping a close eye on the center’s data.

The good news is that even a few great books can make big waves in the classroom. Recently, I introduced my students to two titles included in the center’s 2014 data: Katheryn Russell-Brown’s “Little Melba and Her Big Trombone” and Kathryn Otoshi’s “Two.” My students love these stories. They’ve been listening to recordings of Melba Liston’s music and participating in dramatic retellings of “Two.” That doesn’t mean, of course, that they’ll cease their campaign to make some of the Morrisons’ peanut butter fudge.

Amy Rothschild is an early childhood educator whose writing has appeared in Dissent and The Hechinger Report. @amywrothschild