The economy is improving, but the wealth gap between white and minority families is only growing wider. 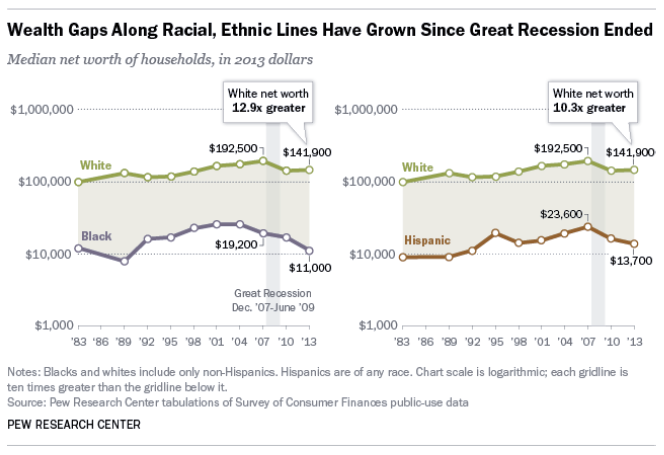 Much of the recent debate over inequality has focused on income — what people earn in a given year. But in some ways, wealth is even more important. Wealth is what gives families a safety net in case of a lost job or a medical emergency; it’s what ensures workers a secure retirement or gives them the flexibility to start a business; and it’s what allows parents to give their children a head start in life. The recession hit wealth even harder than it hit income: Many Americans who held onto their jobs saw their net worth plunge when the housing bubble burst and the stock market crashed.

The recovery in wealth has been weak across the board. According to the Federal Reserve’s Survey of Consumer Finances, the source of Pew’s data, the inflation-adjusted net worth of the median U.S. household — the value of all its assets minus its debts — fell nearly 40 percent between 2007 and 2010, and has been essentially flat during the recovery. No major group by race, age, education or pretty much any other factor has fully dug out of the hole left by the recession.

But whites have seen at least some recovery in their finances. According to Pew, the net worth of the median non-Hispanic white family was about $142,000 in 2013, up 2.4 percent from 2010 after adjusting for inflation. Black and Latino families, meanwhile, have seen their net worth decline. As a result, the wealth gap between blacks and whites is at its highest point since 1989. 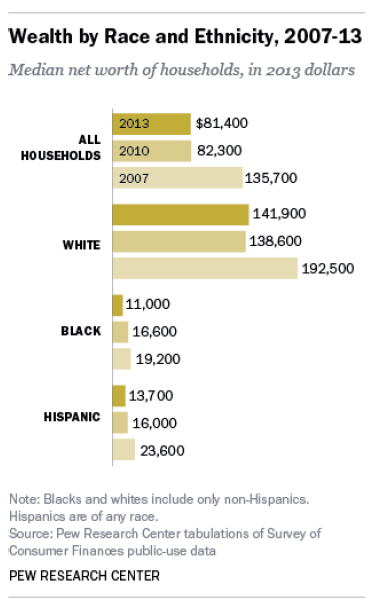 The widening wealth gap isn’t particularly surprising. As my colleague Andrew Flowers and I wrote when the Fed data was released in September, inequality in general has increased during the recovery, in part because the stock market has rebounded much more quickly than wages or home values. Wealthier families are much more likely than poorer ones to own stocks; the same disparity exists for race.

Black and Hispanic families were also hit harder by the recession. Their incomes took a bigger hit, they were more likely to lose their homes to foreclosure and they were disproportionately affected by job cuts in the public sector. The unemployment rate peaked at 9.2 percent for whites during the recession versus 16.9 percent for blacks and 12.9 percent for Hispanics.