The Virginia men’s basketball team started this season with two highly Virginia-esque wins, the statistics of which were so consistent that some were identical. There was stifling defense: 34 points allowed on 59 possessions against Syracuse, then 34 on 69 trips against James Madison. There was pedestrian offense: Tony Bennett’s team shot 4-for-25 from 3-point range in both games. And despite that, the Cavaliers won easily: They failed to record an offensive efficiency of 100 in either game but won 48-34 and 65-34.

In some ways, the Virginia team that won the national championship last season was the least like the others that Tony Bennett has assembled. Those Cavs actually finished ranked higher in adjusted offensive efficiency (second, at 123.4) than adjusted defensive efficiency (fifth, at 89.2), aided by the development of three players who went on to become NBA draft picks. De’Andre Hunter (picked fourth by the Lakers), Ty Jerome (24th, 76ers) and Kyle Guy (55th, Knicks) combined to score 61.4 percent of Virginia’s points last season.

After a talent drain not seen in Charlottesville since the 1980s, perhaps Virginia’s return to its roots could have been expected. This season’s Cavaliers don’t have a player who shoots 40 percent from 3-point range, like Guy and Hunter did last season. They have to win the hard way — prevailing in close, low-scoring games — and after an initial rebuilding process, they’ve done it by doubling down on the philosophy that vaulted them to the top in the first place. A team that lost to South Carolina at home and then started 4-4 in ACC play is now one game back in the conference standings.1

“A lot of people might say we’re maybe not the prettiest team,” Bennett said after his team upset Florida State in January. “We don’t always play beautiful. We can be awkward at times. At times it can be painful. But I say embrace it. Just play the heck out of the defense and get better — and don’t worry about trying to be something you’re not.”

There’s been one constant in Bennett’s 11 Virginia teams, both the national champion and the first-round flameouts: a glacial pace. The Cavaliers have ranked 316th or lower in Ken Pomeroy’s adjusted tempo for each of the past 11 seasons, slowing from 61.7 in 2010 to 59.3 this season. In fact, for the fourth straight year, they’re dead-last in that metric.

When they were dominating the ACC at that pace but still experienced some hiccups in March, they faced an intriguing question: Were they too slow? The No. 1 seed that won the national championship provided a suitable answer, but the fact remains that slow-paced games favor the underdog — a role Virginia could play in the NCAA Tournament for the first time in three years. The slog may have hindered the Cavaliers’ elite teams in the past. This season, it may be just what they need to exceed expectations.

In past years, when Virginia was a high seed in the habit of walking the ball up the court, Bennett’s team was naturally at risk of ending up in a shootout with a team like UMBC. Now, most games are still close — since Jan. 7, 15 of 16 have been decided by single digits, and three have gone to overtime — but that means the Cavaliers have been in the position to upset the likes of Florida State and Duke. They’re 10-2 in games decided by five points or fewer. Saturday at home, Virginia all but sealed its NCAA Tournament case by beating Duke as only it can. The defense held the nation’s third-highest scoring team by points per game (82.3) to its lowest total of the season (50), and Virginia’s Jay Huff iced the win in the final seconds by stuffing a Vernon Carey layup that would have put Duke in the lead.

Asked after that game how his blood pressure was, Bennett said, “Where it always is. All year. Every game,” meaning: high. But Virginia’s style is for the best. No team since 2002 has snagged a top-eight seed in the NCAA Tournament with an adjusted offensive efficiency under 104. Virginia’s is 99.4 through Wednesday’s games, 3.1 points worse than this season’s average. The Cavaliers’ adjusted defensive efficiency is 85.2, 17.3 points better than average. Since at least 2002, just 12 total teams, two major-conference teams and no NCAA Tournament teams have entered the postseason with a wider disparity.2 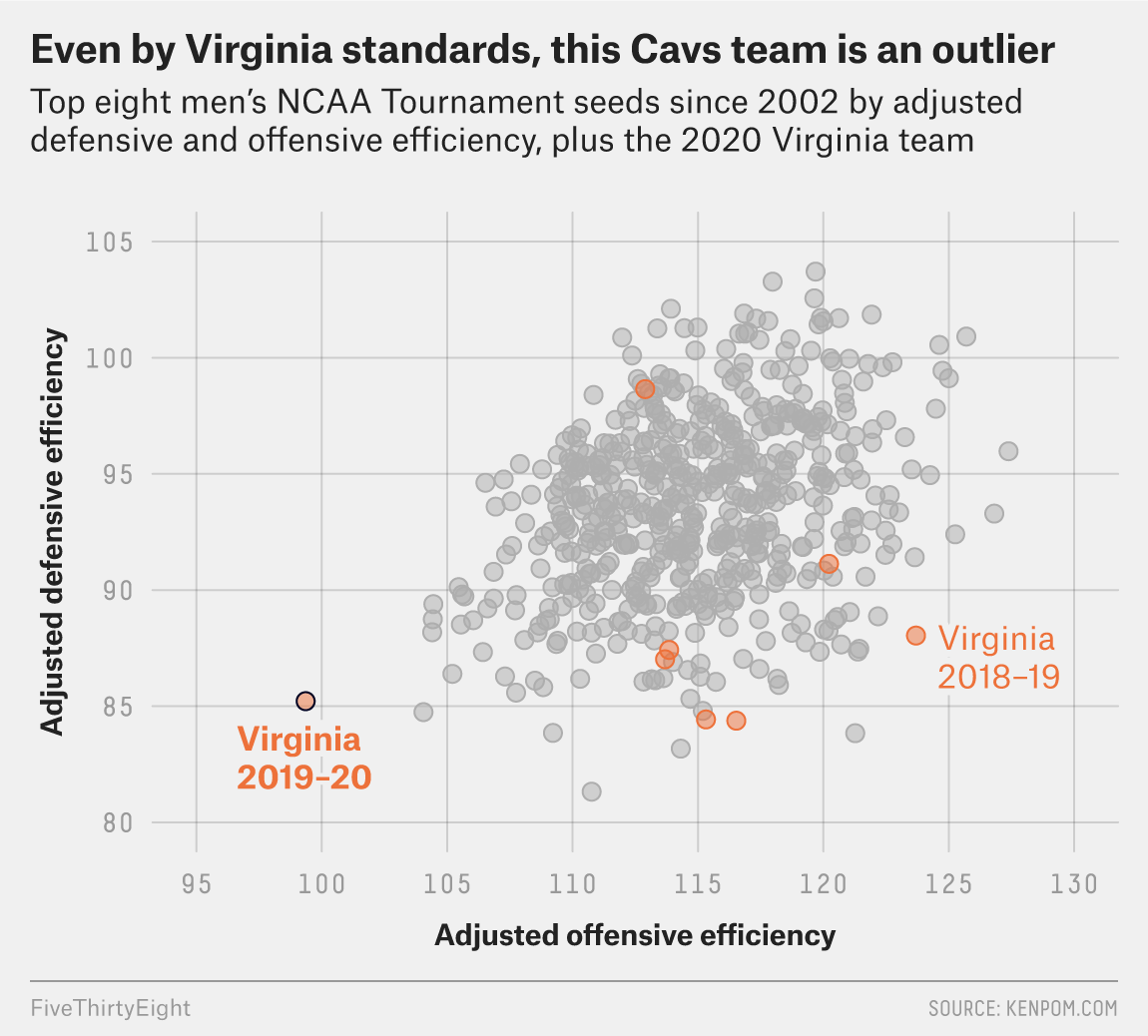 Virginia’s defensive efficiency of 85.2 is best in the country and, perhaps more impressively, the best in Bennett’s tenure. Against his pack-line defense, opponents are again hoisting lots of 3-pointers (42.4 percent of shots) and making very few of them (29.0 percent, 12th in the country). Opposing teams’ effective field-goal percentage is just 43.0, and this Virginia team is better than Bennett’s first 10 at denying opposing free-throw opportunities. What the Cavaliers also do at an improved rate is block shots, like the one Huff swatted to win the game Saturday. With defensive specialists Huff and Mamadi Diakite both in the starting lineup, Virginia might be all-in on defense more than ever before.

The only team (Louisville) to beat the Cavaliers since Jan. 20 did it by shooting 25-for-49 from the floor and 21-for-24 from the line, limiting its turnovers to five and grabbing eight of 24 available rebounds on the offensive end. Those stats would be a lot to ask of, say, a No. 1 seed in an NCAA Tournament game, and this March, Virginia will not be that team.