It took nearly four minutes for the Portland Trail Blazers to put their first points on the board Tuesday night in Game 1 of the second round of the NBA playoffs. By the time the final horn sounded, they hadn’t improved much, finishing with an offensive rating of just 90.5 points per 100 possessions against the San Antonio Spurs. It was a collapse for an offense that had been operating near peak efficiency — the Blazers scored 111.8 points per 100 possessions in their last series against the Houston Rockets, second only to the Los Angeles Clippers in this year’s playoffs. They need that offense, too. Portland had the league’s 16th-best defense this season. When the offense isn’t working, the team probably isn’t either.

The offense stalled Tuesday night primarily because the Blazers just couldn’t make shots. Often “just couldn’t make shots” is a euphemism for bad luck, and a dismissal of how the opponent’s defense affected a team’s shooters. A glance at the numbers from Game 1 could certainly leave you with that impression. In the regular season, the Blazers made 38 percent of their shots from outside the restricted area. On Tuesday, that share was just 27 percent. But it was more than just a collection of tough rolls and bad bounces — the Spurs put whole lot more hands in the Blazers’ faces than the Rockets ever did. 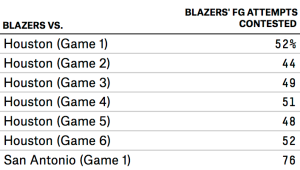 According to NBA.com’s SportVU Player Tracking Box Scores, 76 percent of the Trail Blazers’ shot attempts in Game 1 were contested. (Contested shots, according to the stat-keepers, are defined as shots that have a defender within 4 feet of the shooter.) In their series against the Rockets, only 49 percent of the Blazers’ total shot attempts were contested. The chart to the left shows the percentage of Portland’s shots that were uncontested in each of their individual playoff games this season.

Unfortunately, NBA.com only has splits on contested and uncontested shots available by single games, so we can’t quickly put together a league-wide comparison to see how much of a random blip this is. What we do know is that the Spurs held their opponents to the fourth-lowest effective field goal percentage in the league this season. In December, NBA.com’s John Schuhmann found that the Spurs were contesting the highest percentage of opponent jump shots in the league, and by a fairly wide margin.

That the Blazers are taking contested shots indicates the effectiveness of the Spurs defense in dictating who’s shooting and when. Twenty-one of LaMarcus Aldridge’s 25 total shots Tuesday night were contested, suggesting that the Spurs took away open jumpers and the Blazers ended many of their possessions with the highest probability of success given the circumstances — letting the preternaturally talented Aldridge take a shot. And he made plenty of them — 52 percent of the contested shots — to finish with 32 points overall. But the Spurs still forced the Blazers’ offense out of their rhythm.

The foundation of the Trail Blazers’ offense is creating and making open jumpers. They use a variety of strategies built around Aldridge in the post or running pick-and-rolls with Damian Lillard, but the goal is always to get the ball into the hands of an open shooter. Every contested shot Aldridge takes is ending a possession that hasn’t resulted in an uncontested shot for someone else. In many ways, the ratio of contested to uncontested shots is one of the vital signs for the health of the Blazers’ offense. Any disruption of their ability to create open space for their shooters shows that the Spurs’ defense is succeeding.