Anne Hathaway is out this weekend with “The Intern,” a movie that also stars Robert De Niro in a delightful role-reversal: Hathaway plays a stressed-out boss, and De Niro an intern. That’s the extent of the joke. And judging by the trailer, the movie doesn’t get any more sophisticated than that.

“The Intern” doesn’t seem like a great movie: It’s earned a middling score of 55 percent fresh on Rotten Tomatoes, and we’re still in September, a traditional dump-month for movies that don’t test well. “The Intern” is, on the other hand, a fantastic opportunity to look at the career of Hathaway, one of the best and, oddly, most polarizing actors working today.

Riffing on our previous Hollywood Taxonomy coverage, I used Rotten Tomatoes and OpusData to find the critical reception and box office performance, respectively, of all the movies that had Hathaway in a starring role. Since Hathaway is adept in an ensemble cast and often still manages to steal the scene even in smaller parts, I also included her supporting roles.

The best I could do was sort them into these three relatively distinct categories: 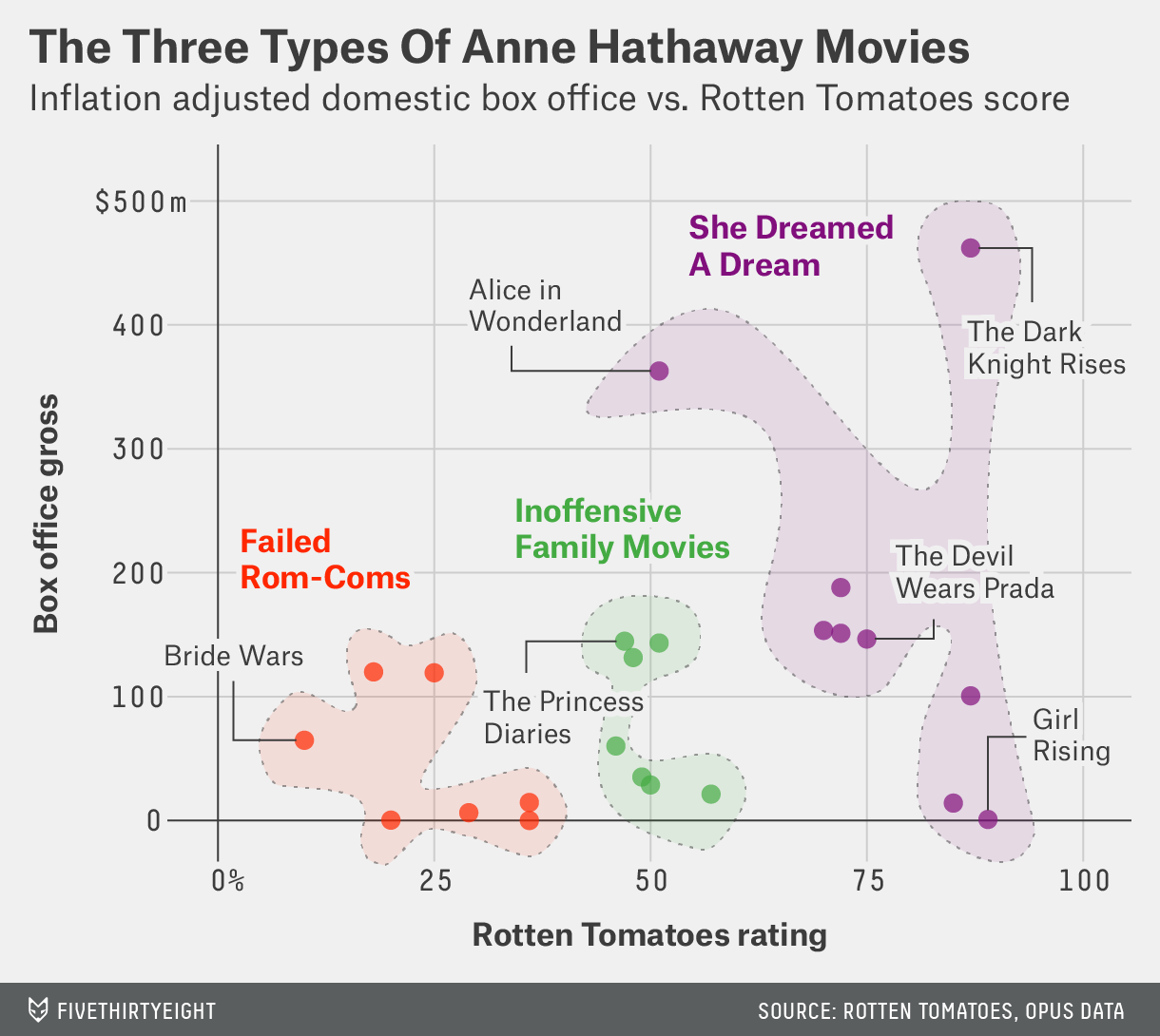 “Welcome to the graveyard of ambition.”

Alright, so there’s a little more genre nuance going on here than merely failed romantic comedies, but none of these movies were particularly good, and all of them were predictable films with a prominent romantic plot. All of these movies made less than $120 million at the domestic box office and had less than 40 percent fresh on Rotten Tomatoes. Those are not numbers you want to see.

You get the idea.

At 18 percent fresh,“Valentine’s Day” is the second-lowest rated film Hathaway’s ever appeared in. It’s an ensemble-cast movie, featuring a subplot where Topher Grace can barely cope with Hathaway’s career as a phone sex operator. This film includes some very antiquated views on the agency of sex workers, and, at the same time, strains the viewer’s suspension of disbelief with the idea that Grace could ever consider himself too good for Hathaway.2

All these films are ripe for ridicule, but they’re innocent attempts at classic character arcs that just didn’t work out so well.

Instead, I want to focus on “Bride Wars,” the lowest-rated film (10 percent fresh) that Hathaway has ever appeared in, and which may very well be the worst movie I’ve never seen. Please enjoy the trailer:

That scene where the brides tackle each other is the climax of the film, but somehow made it into the preview. The gist is that Hathaway and Kate Hudson are best friends until the worst wedding planner in America makes a bush-league mistake and schedules their weddings for the same day. No problem, this conflict is easily resolved through a 30-second conversation between rational adults, right?

Wrong. Rather than do what normal humans in a 20-year friendship would do, they decide to sabotage each other’s weddings in this 89 minute3 comedy. Everyone is miscast: One of the couples consists of Hathaway — a go-getter who fights for herself in the real world — playing a meek fiance to Chris Pratt’s character, an unredeemable ass with no endearing qualities or even an iota of charm.4

It comes down to this: Hathaway is very good in the movies she is in, but in retrospect some of those movies aren’t that great.

This cluster of movies is the rock on which the Anne Hathaway™ Brand was built. I don’t even have cable, and I can tell you for a fact that at least one of these movies will soon be airing — or was recently aired — on some network with “family” in the title.

These films each made less than $150 million domestically and got in the ballpark of about 50 percent fresh on Rotten Tomatoes, ranging from 46 percent on the low end (“Hoodwinked”) to 57 percent on the high end (“Becoming Jane”).

You can trace much of Hathaway’s initial work to her breakout role in “The Princess Diaries” as a fish-out-of-water “commoner,” a formula Hathaway would lean on repeatedly in the following several years.

“The Princess Diaries” has a mediocre 47 percent fresh rating and is the ultimate in awful childish wish-fulfillment. It’s “Harry Potter” for a society that realized magic is dead and the only reliable guarantee of happiness on this forsaken earth is inherited dynastic wealth.5

The only film in category that doesn’t neatly fit under “inoffensive family films” is “Love and Other Drugs,” the pharmaceutical romance movie. Let’s be real though, our society’s most watched cable networks are essentially funded by erection pill advertisements, so it’s hard to still be scandalized by this one. (Underrated film, for what it’s worth.)

Hathaway realized, though, that you can only make so many movies like this. Because then she burned down the family-friendly schtick and took her career to a fantastic new level.

She Dreamed A Dream

“No, I don’t want to quit. That’s not fair. But, I, you know, I’m just saying that I would just like a little credit… for the fact that I’m killing myself trying.”

Hathaway got serious, and it’s been amazing.

The turning point is generally considered 2010 or 2011 — probably “Love and Other Drugs” smashed some of the princess vibe she had cultivated in the preceding 10 years — and she’s been on a tear since, with critically acclaimed roles in critically acclaimed movies, entree into director Christopher Nolan’s shortlist of preferred actresses, roles that require immense depth, and an Academy Award all her own for a notoriously short appearance in a notoriously long movie.

What prompted the change? “The Devil Wears Prada,” 75 percent fresh rating, might be the most instructive place to look. It’s the earliest film in the set where Hathaway has a leading role, and it shows the hardening of a doe-eyed newcomer into an achieving machine beset on all sides by adversaries who want nothing more than to sabotage her.

Either way, these are fantastic films. “Alice In Wonderland” saw Hathaway once again stand beneath a crown, but this time with some nuance and madness. She was the heart of “The Dark Knight Rises,” a tour-de-force in “Les Miserables,” and acted the hell out of the worst dialogue written in “Interstellar.”6 These films either made a ton of money (“Alice in Wonderland,” $363 million) got great reviews (“Les Miserables,” 70 percent fresh) or both (“The Dark Knight Rises” made $462 million and earned 87 percent positive ratings).

This is the kind of Hathaway that makes people jealous.

Categorizing Hathaway’s filmography comes down to quality much more than money, but it’s very difficult to nail down any kind of trajectory: Hathaway made “Bride Wars” three years after “The Devil Wears Prada,” but then turned around and made “Alice in Wonderland.”

Here’s her box office and Rotten Tomatoes scores plotted as a function of time:

No change over time, no discernable trajectory that isn’t merely related to “The Dark Knight Rises” being really good and making lots of money. In a given year, it’s just as likely Hathaway will star in a frilly turd of a romantic comedy as it is she will appear in an Oscar-nominated turn of greatness. She’s the Targaryen dynasty of movies — whether it’s great or it’s terrible, she’s going to play it all the way.

That means the “The Intern” may suck (and it probably sucks, barring a brilliant twist or a terrifically inaccurate trailer.) But unlike with other actors, it doesn’t mean that Hathaway is on the way down. It just means she’s doing something different this time, and will be back again sometime next year with a prepared awards speech.

Check out the other actors we’ve profiled in Hollywood Taxonomy.

CORRECTION (Sept. 29, 11:50): A previous version of this article incorrectly described the plot of “Song One.” The character in the coma is Hathaway’s character’s brother, not her boyfriend.