What’s the worst movie in history? “Battlefield Earth,” featuring John Travolta as a dreadlocked alien (IMDb rating: 2.4)? “Troll 2,” a non-sequel featuring no trolls (IMDb score: 2.6)? “Ishtar,” the only movie for rent in Hell’s video store (IMDb score: 4.1)? Perhaps it’s “Gigli” (IMDb score: 2.3), the movie that ruined (the first) Bennifer for all of us?

According to voters on the Internet Movie Database, it’s none of the above. With a dreadful weighted rating of 1.4 out of 10 based on more than 44,000 votes, a 2014 Bollywood movie called “Gunday” is by far the worst movie in the IMDb universe.1 A pretty silly, over-the-top Bollywood action flick about gun couriers that features a love triangle and lots of comical misunderstandings typical to the genre, “Gunday” has somehow found its way to the bottom of the biggest movie database in the world.

That bottom is very far down. There are currently more than 235,000 films on IMDb, and in reporting this piece I found that the average rating of a movie on the site is 6.31, with the middle 50 percent of movies rated between 5.5 and 7.2. Not a single qualified movie besides “Gunday” rates worse than 1.8. 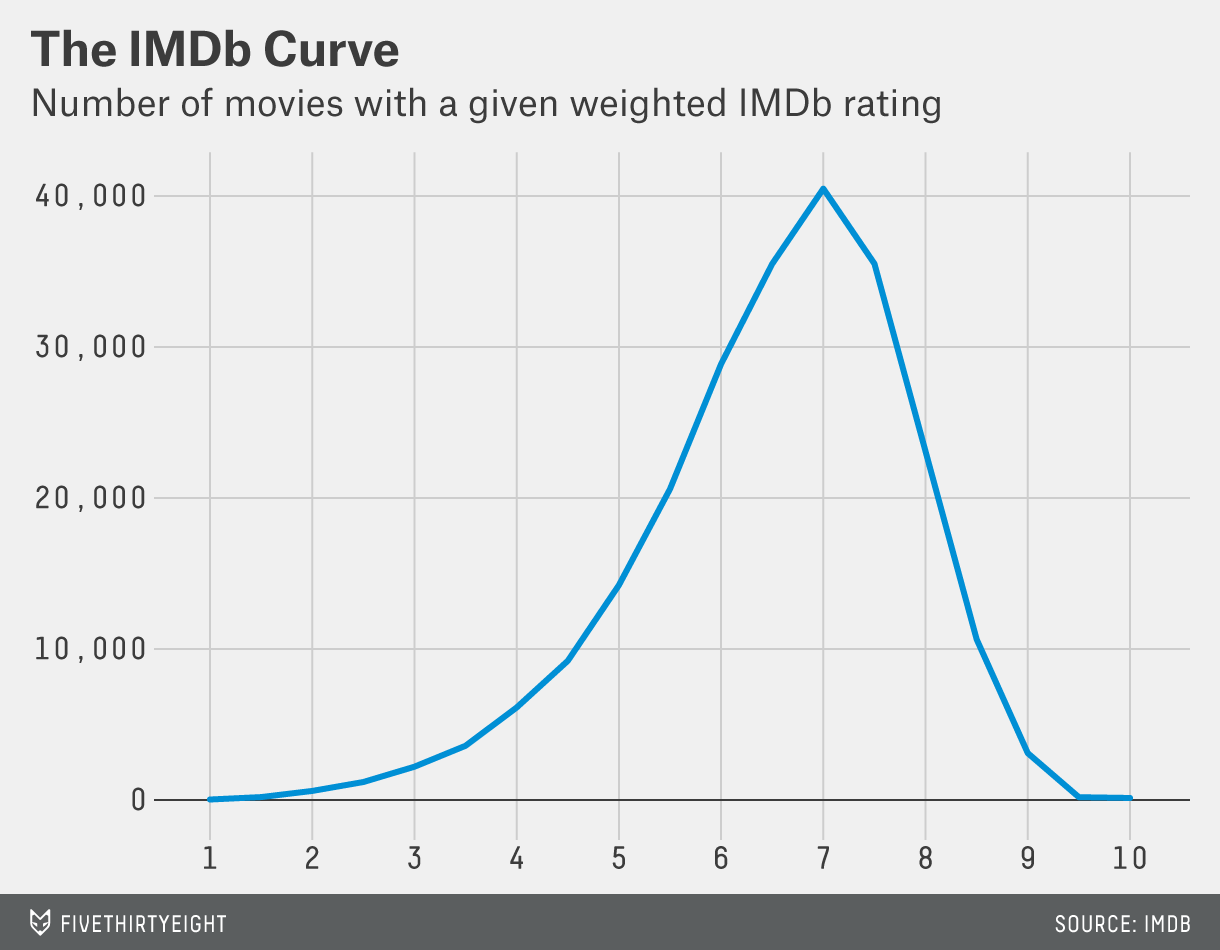 “Gunday,” which came out of the huge Bollywood studio Yash Raj Films in February, isn’t that bad. There are a few large plot holes and unconvincing character motivations, but the dance sequences are top-notch, the costumes are fun, and Irrfan Khan’s portrayal of a world-weary policeman is as good as his fans have come to expect. In India, it’s the top-grossing February movie in Bollywood history. The New York Times’ Rachel Saltz ended her review of “Gunday” by calling it “downright enjoyable.” RogerEbert.com gave it three out of four stars. Variety called it “a boisterous and entertaining period crime drama.”

But the film made a misstep that has doomed it to the bottom of the IMDb pile. “Gunday” offended a huge, sensitive, organized and social-media-savvy group of people who were encouraged to mobilize to protest the movie by giving it the lowest rating possible on IMDb. Of “Gunday’s” ratings, 36,000 came from outside the U.S., and 91 percent of all reviewers gave it one star. The next lowest-rated movie on IMDb — 1.8 stars overall — has a more even distribution of ratings, with only 71 percent of reviewers giving it one star. The evidence suggests the push to down-vote “Gunday” was successful, and that shows just how vulnerable data can be, especially when it’s crowdsourced.

The protest against “Gunday” is the most recent cause célèbre of a Bangladeshi nationalist movement called Gonojagoron Moncho, or National Awakening Stage. Gonojagoron Moncho was founded in response to the trial of Abdul Quader Molla, a Bangladeshi Islamist leader who last year was found guilty of killing hundreds of civilians as part of a paramilitary wing during Bangladesh’s liberation war from Pakistan in 1971. He was sentenced to life in prison for his crimes by the Bangladeshi International Crimes Tribunal. But many Bangladeshis found that sentence too lenient, and more than 100,000 of them gathered in Shahbag Square in the capital city of Dhaka to challenge it.

After months of protests and escalating violence from counter-protestors, Gonojagoron Moncho got its wish. Molla’s political party, Jammat-e-Islami, was banned from participating in future elections, and Molla himself was retried, sentenced to execution and hanged to death late last year.

Flush with success, the movement has since become an online alliance of bloggers focused on protecting Bangladesh’s history and promoting the country’s image. That includes protesting “Gunday,” because of the film’s reference to the Bangladesh Liberation War as the Indo-Pak war. In its first 11 minutes, the movie claims that India alone defeated Pakistan, and implies that an independent Bangladesh was simply a result of the fight.

On Twitter, activists used the hashtag #GundayHumiliatedHistoryOfBangladesh to get the word out about the protests and to ask supporters to bury the film on IMDb. (By using a quarter of their character allotment on the hashtag alone, though, there wasn’t much room for the activists to elaborate.) Facebook groups were formed specifically to encourage irate Bangladeshis and others to down-vote the movie. (A sample call to action: “If you’re a Bangladeshi and care enough to not let some Indian crappy movie distort our history of independence, let’s unite and boycott this movie!!!”)

Fahmidul Haq, an associate professor of mass communication and journalism at the University of Dhaka, said that getting angry at Bollywood for over-representing India’s role in the 1971 war is something that even Gonojagoron Moncho’s opposition can agree on. “Pro-religious, pro-Pakistan and anti-Indian online users are very active in the cyberspace,” he told me. “For the IMDb case, I guess both groups gave lower ranking to ‘Gunday.’”

Bangladesh’s Ministry of Foreign Affairs lodged a formal protest about the film with the Indian government, noting it was drawn to the controversy by the “reaction of people particularly in the social networking sites.” Besieged by complaints, Yash Raj Films was compelled to put out a statement saying, “If this fictitious story and its telling have in any way upset the sentiments of anybody, we would like to clarify that it was totally inadvertent and it is sincerely further regretted.”

Although there have since been numerous complaints about the down-voting of “Gunday,” IMDb doesn’t seem to be discounting the plethora of low ratings, or at least not yet. IMDB’s head of PR, Emily Glassman, told me that while the site has several built-in safeguards to prevent ballot-stuffing, the policy is not to delete or modify individual ratings from registered users.

“Our approach is not to focus on individual titles or incidents, but to analyze this behavior whenever it occurs and to apply any new learnings to strengthen our voting mechanism, so that the resulting improvements affect all titles/votes in our system rather than just the ones specifically affected by these isolated situations,” she said.

What’s left is a movie that’s been sentenced by an angry mob, and is unlikely to shed its apparent punishment any time soon. For Paris Hilton’s “The Hottie & the Nottie” — currently rated second-worst of all time — to take over IMDb’s bottom spot, the next 41,000 voters would have to give it a 1.

Crowdsourcing can be a tremendously powerful way to get a consensus understanding of the world. Because the sample size is so large, there’s an assumption that whatever it yields is robust and true. But even with oversight, aggregated rankings are subject to unforeseen biases. Crowds are always big — but they’re not always wise. Sometimes it’s impossible to control which crowds are being sourced.

Data analysis by Eugene Bialczak. Also, a disclaimer: the author wrote much of the IMDb Trivia App.