The narrative that analytics poseurs are doing inferior jobs in front offices compared to ex-players and coaches who really know how to evaluate talent has made its way to the NBA.

Last month, ESPN columnist Chris Broussard wrote a piece examining recent trends in the hiring of NBA general managers. Broussard questioned whether “stats guys” were advancing in front offices at the expense of “basketball lifers.” He quoted two anonymous NBA executives who expressed the idea that analytics is taking too large a role in front offices and that “analytics guys” who haven’t played or coached don’t really understand the game.

But the data on performance by NBA general managers over the last 20 seasons suggests that stats-oriented GMs aren’t any worse than regular GMs. They actually may be a bit better.

One of the anonymous executives in Broussard’s article compared the new breed of analytics hires to amateur stock-pickers, whereas to this executive’s mind ex-players were gimlet-eyed veteran portfolio-managers. The other executive said, per Broussard:

It’s not accurate to characterize all analytics-focused GM hires as uneducated in traditional basketball. Masai Ujiri of the Toronto Raptors, Ryan McDonough of the Phoenix Suns and Rob Hennigan of the Orlando Magic are all young GMs who rely on analytics. They also spent years inside NBA organizations working as scouts and talent evaluators. Their credentials are legitimate. But if we play along with the false dichotomy of “basketball guys” versus stats analysts, we should expect general managers who played or coached in the NBA to have better results than those who come from backgrounds as scouts or agents.

On one point at least, the narrative is right: Of the 23 general managers NBA teams have hired in the last four off-seasons, 18 neither played nor coached in the NBA.1 That’s very different from how it used to be: In the 15 years prior, non-coaches and non-players comprised only 33 of the 81 GM hires. The chart below shows a clear trend toward nontraditional GM candidates: 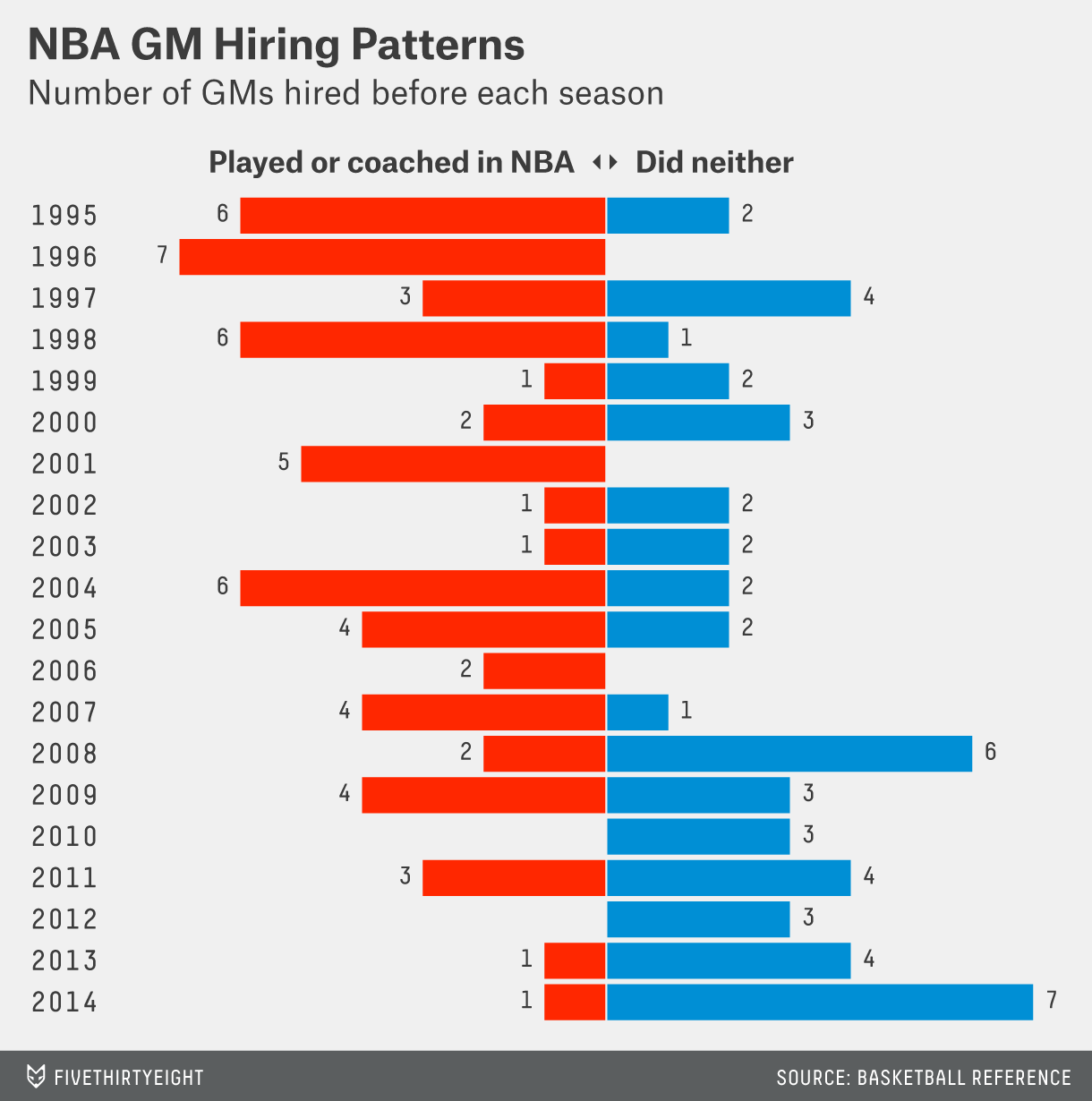 Once they’re hired, GMs still have to perform. The most basic criterion by which to judge GMs is their tenure with a team. While some owners have more patience than others, GMs generally need to put winning teams on the court to remain employed. If ex-player GMs were much better than former scouts or agents, we would expect them to be employed for longer stints. Instead we see this: 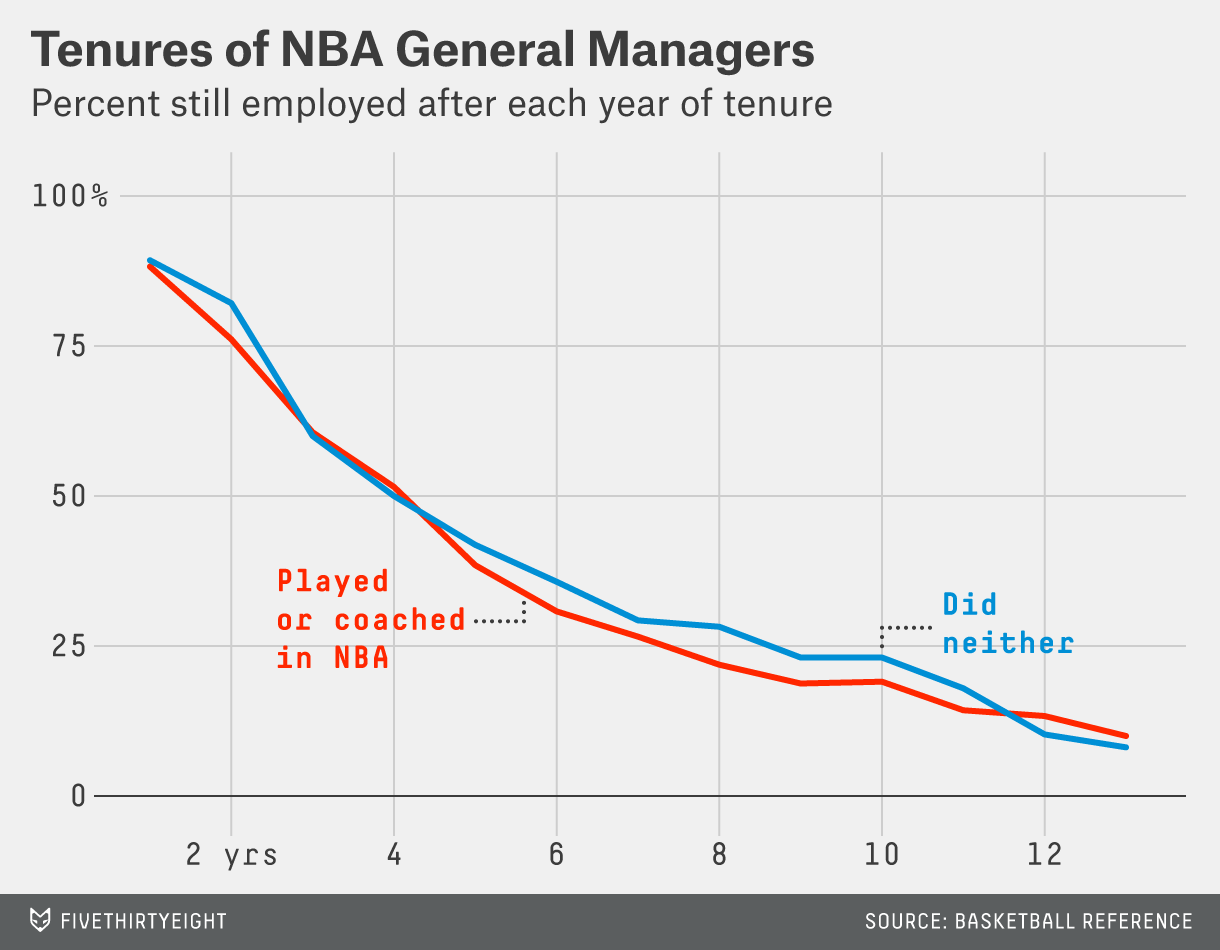 This is a Kaplan-Meier survival plot, an illustration of what share of a population survives at a given time, and it shows that GMs who were former players or coaches tend to have slightly shorter tenures than GMs who were neither. Note, however, that the difference, as measured by a Cox Proportional Hazards model, is not significant.

But employment status is merely a reflection of a GM’s success, or lack thereof, in producing a winning team. We can also measure GMs by what their teams do on the court. GMs who never played in the NBA are slightly worse in improving winning percentage, but they inherit better teams.2 (It’s harder to add five wins to a playoff team than it is to a lottery team.) GMs who were players or coaches have inherited teams with an average winning percentage of .410; GMs who are outsiders started working for teams with a .490 winning percentage. That partly explains why in the third year of their tenures, basketball lifers had increased their teams’ winning percentages by 5.7 percent on average, as opposed to 2 percent for outsiders. But that difference is not statistically significant, and more outsiders’ teams made the playoffs (63 percent vs. 48 percent).

Good GMs and bad GMs come from all different backgrounds. For every Jerry West or Danny Ainge, there’s an Elgin Baylor or M.L. Carr. Seven of the last 18 NBA championships were won by teams whose decision-makers neither played nor coached in the NBA.3 That’s almost exactly in line with the 42 percent of team seasons those non-players have overseen in that time period.

Of course, none of the scouts who’ve won NBA titles as GMs would be described as dilettantes masquerading as having advanced degrees in the game of basketball. The war between old-school basketball guys and new-school analytics guys in front offices is largely a fiction, a product of a shift in the way general managers are being hired in the league.